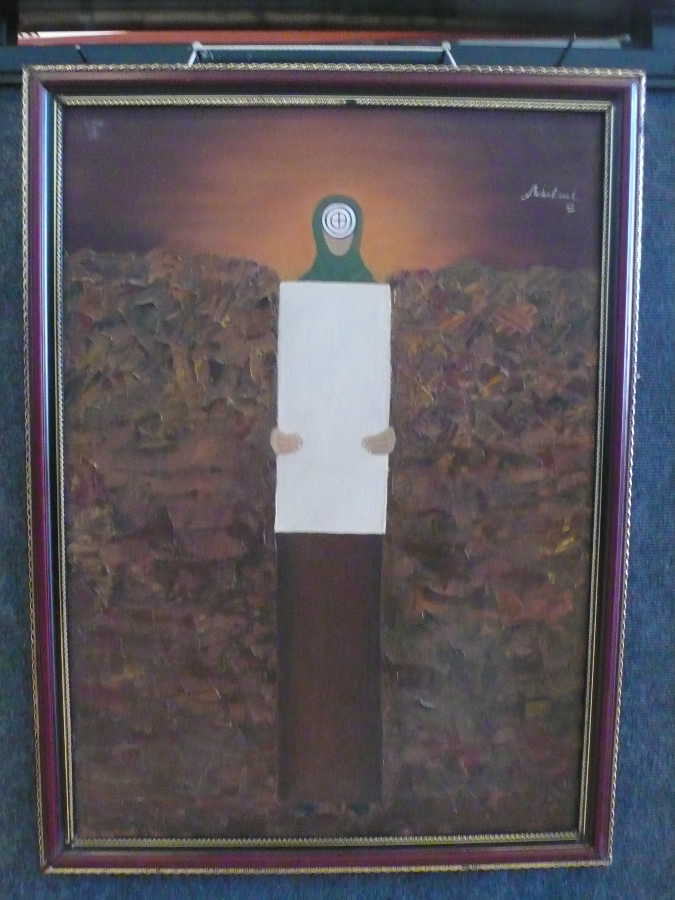 An Introduction To The Letter

In February 2020, the U.S. and the Taliban signed an agreement, in which it was agreed that the U.S. and NATO forces would leave Afghanistan, the Taliban would reduce violence, cut ties with Al-Qaeda and engage in peace talks with the Afghan government. The Taliban have not been committed to any reduction in violence or cutting ties with other terrorist groups in the region, nor have the peace talks resulted in peace. In April 2021, president Biden announced the withdrawal of the U.S. forces from Afghanistan, a decision that made other NATO members also withdraw their forces. The withdrawal of the American and NATO forces is almost complete. This further emboldened the Taliban.

Since April, Afghanistan has seen an alarming rise in conflict and violence, the result of which has been mass displacement, unprecedented civilian casualties, and severe economic damage to the already struggling country. After seizing about half of all the 420 districts, the Taliban advanced towards the city centers, attacking areas near airports. Now, of the 34 city centers, six have fallen to the Taliban. Herat and Kandahar airports have remained closed for several days, making travel from these zones to Kabul impossible.

Previously, Afghan forces had the support of the US and NATO forces. But now they continuously face shortage of water, food, ammunition, and the necessary logistic support they need to carry on the fight against the Taliban. As the Taliban rapidly took over districts and revived their harsh Islamic Sharia, civilians left their homes and moved to the major cities, such as Herat in the west, Kabul in the center and Mazar-e Sharif in the south. The families internally displaced into the big cities are facing a food shortage, as they cannot go back to their original provinces, neither can they continue to live in bigger cities where they have ended up living in the streets and temporary tents.

The UN reported in July a 47 percent increase in civilian casualties in the first six months of 2021, compared to the same period in 2020. Women, girls and children are the ones paying the highest price of the ongoing war. The same UN report indicates an 82 percent increase in women casualties in the first six months of 2021. According to the Ministry of Education of Afghanistan, 176 schools have been destroyed in the last few months, depriving more children from getting an education.

In the areas currently captured by the Taliban, the group’s fighters have not only banned women and girls’ access to education, work and health services, but have also subjected women and girls to inhumane and degrading treatment. There are reports by Kabul-based newspapers that in the non-Pashtun areas, Taliban fighters have used sexual violence and jihad-ul Nikah – a phrase apparently used first by ISIS fighters in Iraq— referring to sexual violence and abuse of women and treating them as property and reward for jihad. There are dozens of videos circulating on social media showing the Taliban fighters flogging women in public for not wearing a Burqa and not being accompanied by a male member. Many of the displaced families say the reason for their fleeing their homes is the fear that their female members could be treated in a degrading way by the Taliban or even being taken away by the jihadist fighters. Some feared the Taliban would force their male children to be recruited as Taliban fighters, which is yet another reason thousands of families left their original districts and moved to the cities.

As the situation is getting worse in Afghanistan, a number of women and girls, mostly from or currently based in Herat City, under attack by the Taliban, spoke about their worries and fears when the Taliban return, and what they think the international community could do to protect women and their rights in Afghanistan. To safeguard their identities, the names of those who participated have been changed to pseudonyms.

We are a group of women writing from Herat, a very ancient city, founded by Alexander the Great, and famous for its beauty, its monuments and parks, which will turn into a prison to us. The Taliban control all the districts of our province. They have closed the border with Iran, and so we can escape neither by road nor by air because the airport is closed.

All the cities of our country are besieged by the Taliban who control the rest of the territory. Many people want to escape from the cities, because of the gunfire and the bombardment. But they cannot escape; and [those who came from districts and villages to the cities in search of safety] must now live in the streets and in temporary tents. The people will soon run out of food supply, and the army out of food and ammunition.

In the Taliban-controlled áreas, 176 schools are already closed. The Taliban have prohibited girls’ education, and many of those over 15 have been subjected to forced marriage. The Taliban distribute women as war loot, violate and flog them in public. The boys are forcibly recruited as child-soldiers. This will be the destiny that await us if our city falls into their hands.

Therefore, before our voices go silent and our faces disappear, we want to send you these messages, hiding our real names, so that we not disappear into oblivion forever.

Sara from Bamyan, “I am worried about my three daughters. We have nowhere to go. People say, ‘When the Taliban took the Saighan and Kahmard districts of Bamian, they forcibly entered people’s homes and searched for women’s clothing to find out about the number of females in each home.’ They [the Taliban] have been reported to take women and young girls forcibly with them. I wish rather that my daughter die in a dignified way, than to be taken into the hands of the Taliban.”

Amina, 28, journalist from Herat, who escaped Afghanistan to Europe in 2020, “I am in Europe safe, but with every bad news I am deeply shaken. I cannot sleep, neither can I focus on anything. I am neither alive nor dead. I feel ashamed and useless.”

Marjan, 19, student of fine arts, Herat, “Recently, I have read the book, The Last Girl, by Nadia Murad [the Yazidi human rights activist and co-recipient of the 2018 Nobel Peace Prize]. What Nadia has narrated about the horrible crimes committed by ISIS in Iraq is quite similar to the way the Taliban fighters are evolving, particularly the Taliban’s enslaving of women and girls, which the Islamists call, ‘jihad-ul Nikah.’ I think the international community, particularly the US and other free countries who value women rights, should rethink the Taliban and decide between a Taliban takeover of Afghanistan and enslavement of around 16 million women and girls, or stopping the terrorist group of the Taliban.”

Elham, 21, student of economics at a private university, Herat “A Taliban return would damage the already poor economy of the country. The Taliban are skilled in committing atrocities, but they don’t know how to run a country. The international community must not leave Afghanistan on its own; the least they should do is put all possible pressure on the Taliban and stop them, before they establish themselves as a state. Because then the world will have to deal with one more terrorist state.”

Tamana Begum, 24, school teacher, Herat, “If the Taliban are not stopped, I fear I might have to take all my dreams with me to the grave. The world must know that Afghan women have not been responsible for conducting any wars, but have always been victims of war, conflict and violence carried out by men.”

Sahar, 26, “With the Taliban advancing towards the cities, and hearing about the group’s degrading treatment of women, I can barely fall asleep. If the terrorist group enters the cities, I fear they might kill a family member, they might flog me in public for wearing sport shoes or for not wearing a burka. I don’t know what to ask the world to do for Afghanistan.”

Safia, 26, Bamyan, “I have been studying for over 16 years. I have the dream of becoming a university professor someday, but a Taliban return would mean I would have to be imprisoned inside the home and die gradually. The world must not ignore the threat the Taliban pose for women.”

Hava, 25, Herat, “I kindly request the decision-makers of the countries who supported Afghanistan in the last two decades, those who value human rights and women rights to watch the documentary ‘Behind the Veil’ [ ] by Saira Shah and think of each of the number of the civilian dead as a human worthy of a life of dignity, just like their own citizens. Then decide what to do with the Taliban. We know the Afghan state is paying the price of its two decades of flexibility with the terrorist group of the Taliban. But think of the many millions of women who have not had any role in waging this meaningless war and violence, but are affected by it the most.”

Angela, 18, high school student, “Every day when I wake up, the first thing I think of is doing my taekwondo exercise to one day represent Afghanistan in the Olympics. Thousands of other girls have similar dreams similar to mine, and I want the world, particularly the Secretary-General of the UN, Antonio Guterres, to imagine a situation in which a group enters his city by force and makes announcements on radio, TV and the internet that from a certain date on, his children cannot go to school, neither can they follow their dreams of becoming someone they want. What would you think would be best thing to do with such a group?”

Khatera, 26, “I am a woman. I am a Hazara. I run a small business. I hold a degree in sociology. Each of what I am is a problem, a sin and a crime according to the Taliban. That is the case with millions of other women. As I have to take care of my old mother and cannot leave Afghanistan, a Taliban takeover would mean the end of all my dreams and plans, and even my life. What I want the international community, and the countries who value women and human rights, is that they rethink everything about Afghanistan and the Taliban. I want the international community to think of the situation in which they say, ‘We could have prevented all these atrocities and crimes perpetuated by the Taliban, but we walked away.”

Fatima, 30, history teacher at a school, Herat, “After the Soviet withdrawal from Afghanistan, the country experienced a bloody civil war, and when the Taliban took power from 1996-2001, thousands of men were already killed, leaving thousands of women widowed. The Taliban banned work for women. Poverty and hunger forced many women to engage in prostitution under the most inhumane conditions. Those involved in prostitution were arrested and stoned in public spaces, mostly on Fridays in stadiums. I am afraid this history will repeat. I think the Taliban must be stopped before it is too late.”

We are somehow sure that no one can help us – but, please, remember that we too were living once. When we have disappeared into silence, please, reread what remains of our thoughts and out feelings.

The featured image shows an untitled piece by an Afghan woman artist. The name on the painting is illegible. If anyone knows the identity of this piece and its painter, please let us know.