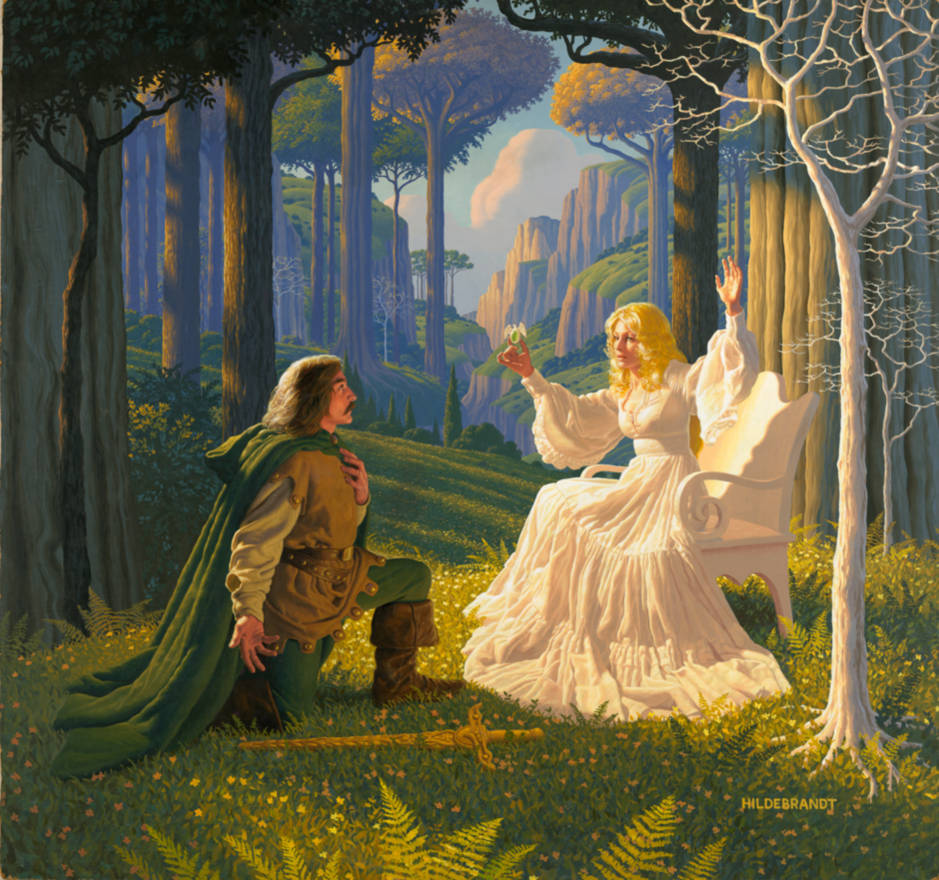 “Actually I am a Christian,” Tolkien wrote of himself, “and indeed a Roman Catholic, so that I do not expect ‘history’ to be anything but a ‘long defeat’— though it contains (and in legend may contain more clearly and movingly) some samples or glimpses of final victory” (Letters 255).

History as a long defeat – I can think of nothing that is more anti-modern than this sentiment expressed by J.R.R. Tolkien. It is a thought perfectly in line with the fathers and the whole of Classical Christian teaching. And it’s anti-modernism reveals much about the dominant heresy of our time.

We believe in progress – it is written into the DNA of the modern world. If things are bad, they’ll get better. The “long defeat” would only be a description of the road traveled by racism, bigotry, and all that ignorance breeds.

And our philosophy of progress colors everything we consider. The scientific concept of evolution (please do not jump on me for mentioning the subject) only suggests that there is a change in living things and that the change is driven by adaptation and the survival of those adaptations that are generally advantageous. If such a theory is granted, it says nothing about the direction of the process nor about the process as improvement or progress. That “evolve” has come to mean “change for the better” is a purely ideological assumption with no warrant in science.

But the metaphor of improvement remains a dominant theme within our culture. A few years ago a survey of young Americans revealed the utterly shocking conclusion that for the first time in recorded history, the young did not expect to be as well off as their parents. It was a paradigm shift in American progressive thought.

But Tolkien’s sentiment bears deeper examination. For not only does it reject the notion of progress, it embraces a narrative of the “long defeat.” Of course this is not a reference to steady declining standards of living, or the movement from IPhone 5 back to IPhone 4 (perish the thought!). It is rather the narrative of Scripture, first taught by the Apostles themselves, clearly reflecting a Dominical teaching:

But know this, that in the last days perilous times will come: For men will be lovers of themselves, lovers of money, boasters, proud, blasphemers, disobedient to parents, unthankful, unholy, unloving, unforgiving, slanderers, without self-control, brutal, despisers of good, traitors, headstrong, haughty, lovers of pleasure rather than lovers of God, having a form of godliness but denying its power. …Now as Jannes and Jambres resisted Moses, so do these also resist the truth: men of corrupt minds, disapproved concerning the faith; but they will progress no further, for their folly will be manifest to all, as theirs also was. But you have carefully followed my doctrine, manner of life, purpose, faith, longsuffering, love, perseverance, persecutions, afflictions, which happened to me at Antioch, at Iconium, at Lystra– what persecutions I endured. And out of them all the Lord delivered me. Yes, and all who desire to live godly in Christ Jesus will suffer persecution. But evil men and impostors will grow worse and worse, deceiving and being deceived. (2 Timothy 3:1-13)

This is Tolkien’s warrant for the “long defeat.”

And the thought is not that we wake up one day and people are suddenly boasters, proud, blasphemers, etc. Rather, “evil men and impostors will grow worse and worse, deceiving and being deceived.”

It was a common belief among the Desert Fathers that successive generations of monks would become weaker and weaker, unable to bear the great trials of their predecessors. Indeed it was said that in the end, the simple act of believing would take greater grace than all of the ascetic feats of the earliest monks.

This is not a pessimistic streak within Orthodox Christianity. If history tells us anything, it is that this is a very honest, even prescient reading. The evils of the 20th century, particularly those unleashed during and after World War I, are clearly among the worst ever known on the planet, and continue to be the major culprits behind all of our current struggles. That war was not “the war to end all wars.” It has rather been the foundation of all subsequent wars. May God forgive our arrogance (“boasters, proud”…). But the Classical Christian read on human life contains the deepest hope – set precisely in the heart of the long defeat.

It is that hope that sets the Christian gospel apart from earlier pagan historical notions. For the “long defeat” was a common assumption among the ancient peoples. The Greeks and Romans did not consider themselves to have exceeded the heroes who went before. They could model themselves on Achilles or Aeneas, but they did not expect to match their like. The Jews had no hope other than a “restoration of the Kingdom,” which was generally considered apocalyptic in nature. All of classical culture presumed a long decline.

The narrative was rewritten in the modern era – particularly during the 19th century. The Kingdom of God was transferred from apocalyptic hope (the end of the long defeat) to a material goal to be achieved in this world. This was a heresy, a radical revision of Christian thought. It became secularized and moderated into mere progress. It is worth doing a word study on the history of the word “progressive.”

But Tolkien notes that within the long defeat, there are “glimpses of final victory.” I would go further and say that the final victory already “tabernacles” among us. It hovers within and over our world, shaping it and forming it, even within its defeat. For the nature of our salvation is a Defeat. Therefore the defeat within the world itself is not a tragic deviation from the end, but an End that was always foreseen and present within the Cross itself. And the Cross itself was present “from before the foundation of the world.”

Tolkien’s long defeat, is, as he noted, of a piece with his Catholic, Christian faith. It is thoroughly Orthodox as well. For the victory that shall be ours, is not a work in progress – it is a work in wonder.

The photo shows, “The Gift of Galadriel,” by the Hildebrandt brothers, painted in 1977.