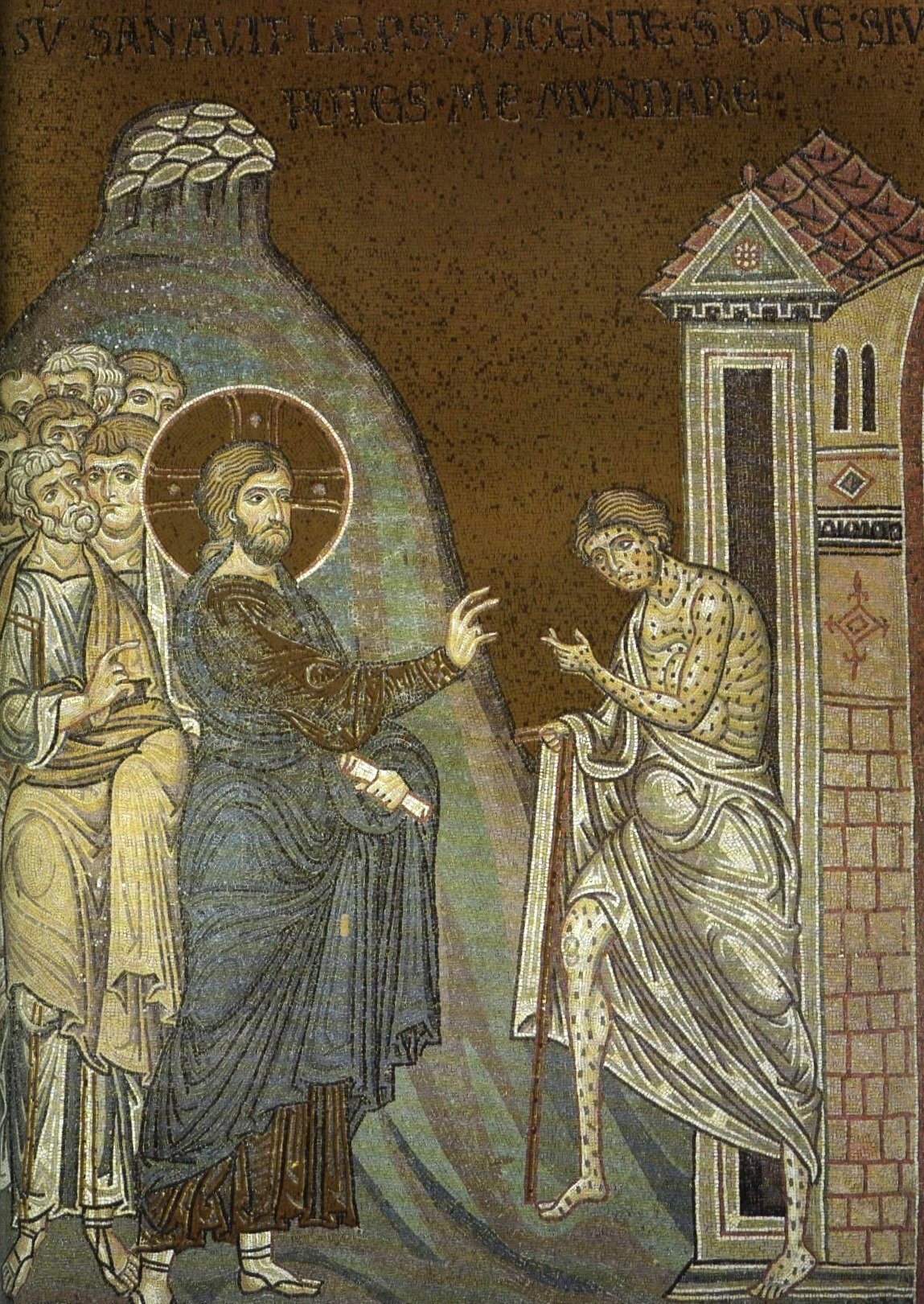 Recent conversations have brought up questions about good and evil, particularly in the natural world. When the world is locked down in response to a virus, it is easy to wonder about the nature of things. Can a virus be called “evil?” Is that the right word for it? In truth, we use words in a very loose manner in our common speech.

We say “evil” about many things, without thinking carefully (or meaning to) about what we’re actually saying. This changes, however, when we attempt to do theology. For theology is always something that involves words, and often turns on the right use of the right word for the right thing. Classically, some of the largest controversies turned on a single iota.

We do not speak with precision in our daily life, and it is silly to expect that we should. But, it is also good to pause, now and again, to think carefully about our speech and what we mean. This article is a small attempt to speak carefully about the nature of good and evil and how Orthodox theology, at its most careful, speaks of them. I’ll also try to define my terms with some care. Here goes.

The Fathers, particularly the Cappadocians through Dionysius and St. Maximus the Confessor, belonged to a school of speech that took great care to hammer away at certain terms, reaching consensus on use and meaning. The seven Great Councils all belong to a single vocabulary project that, over time, developed a working consensus on terms and their application. Some of those words are key:

This list could be expanded even further, but I’ll stop with this. There are some fundamental ideas in all of this. First, and foremost, is the understanding of “being.”

Being, like goodness, and beauty, is foundational. Everything that exists, apart from God, is created out of nothing. And everything(!) that is created is good. God is not the author of evil. Thus, nothing can be said to be “evil” in its actual being. And here we have to think carefully about our language.

When reading classical theology, “essence” or “ousia” or “substance” all refer to the actual being of something – the simple reality that it is. Further, the word “nature,” or “physis,” is used to describe the “what-ness” of something. Thus, a tree has the nature of a tree; a rock has the nature of a rock; an angel has the nature of an angel, etc. If we ask what the “nature” of a tree is, we would answer “to be what a tree is.” A tree is not a rock nor an angel. Again, these are words that describe “being” or “what something is.”

The terms “person” and “hypostatic” are a bit more problematic. For nothing simply “is.” Everything that exists, exists in a particular manner. The tree outside my window is a unique tree and not just the essence of treeness. This expresses something of the uniqueness of what exists. It not only has being (essence), but a particular being (hypostasis).

When speaking of human beings, “hypostasis” or “person” have a quality that is more than mere particularity. There is a relational aspect of our unique existence. I am not fully “who” I am except as I am also in communion with others (more or less).

Related to this, with regard to all things, are the words “existence” and “subsistence.” Something not only has “being,” but the actual being it has is expressed in some manner that is describable. My “existence” encompasses everything that I am doing and every way that I function. Thus, if something is “existential,” it is a matter of the basic expression of my being in a way that can be described and experienced.

Two additional words are quite interesting: “will” and “energy.” Interestingly, the “will” in its most proper meaning, is a faculty and property of the nature (our essence or being). It is a nature’s drive to naturally be what it is created to be. Trees never want to be anything else. A virus wants what a virus wants (by nature). It does not do something else. You can count on it.

Human beings, however, have a different experience of the will, a consequence of our brokenness and lack of communion with God. We have a natural will (the will of our nature), that always tends towards our proper end, that is, what we were created to do and be. But there is what St. Maximus termed the “gnomic” will – a sort of experience of choosing.

That will is not governed by our nature but has a kind of unguided freedom. Generally, when we speak of the “will,” we mean this “gnomic” will. The very fact that we have one is not natural. It is unnatural and is a cause of great suffering in our lives. Christian ascesis, to a large extent, concerns itself with the healing of this disruption in our makeup.

Indeed, according to the authoritative teaching of St. Maximus, Christ Himself did not have a “gnomic” will – a separated, fallen, choosing sort of confusion about His actions. He acted with complete integrity and union as a human being (united with His Divine nature). This can quickly become a very complicated discussion, so I will leave it at that. I will say that we often speak about the human will and human freedom in a manner that ignores this distinction and leads to some very false assumptions about what it means to be human.

For what it’s worth, we see a somewhat similar kind of integrity in the actions and life of the Theotokos. But that’s for another day.

“Energy” is a very interesting word. For years I imagined it in terms of physics, thinking it described some sort of force emanating from a being. However, it’s far more simple. “Energies” are our actions, our “doings.” With God, His actions and His being are one. God is what He is and He is what He does. We’re a bit more problematic.

Our doings are often in contradiction to our being. For example, anything we do that is a movement or action against true existence (our being) is a contradiction of who and what we are. Murder is an action that is inherently evil. Note, it’s not the “being” that is evil, but the misuse of the being in its evil actions.

The Fathers (particularly the Cappadocians, Dionysius, Maximus, etc.) view the creation as inherently good, which is also the same thing as saying that it exists and has being. But they do not see the creation as having the fullness of the Good.

Everything that exists is created to move towards union and full participation in the Good (God Himself). Creation is dynamic and moves and changes. Sin and evil are a deviation from this dynamic. The path the Fathers describe is: being, well-being, eternal being. Being is a given. Our present life should be an increasing acquisition of well-being. Our final goal is full participation in eternal being, the very life of God.

I have found it very helpful to keep all of this in mind when thinking about sin and evil. Orthodoxy makes a strong link between sin and death. Sin is a movement, a misdirection, a drive and direction towards non-being. It displays as murder, lies, deceit, etc., everything that moves us away from the path to God. It is, however, a false path, and not the thing itself.

We may say that a man is evil, but, if we are precise, we must say that his actions (energies) are evil. It was certain errors in the West that led some to speak of human beings as totally depraved and actually evil – or, in Luther’s phrase, “a mass of damnation.” That imprecise language did much harm.

What about the things in the world that are called “natural evil?” This would include events (earthquakes, floods, plagues, etc.). What is “evil” about such things? There is nothing inherently “evil” in the shifting of planetary plates (earthquakes). It’s what planets like ours do. It creates continents, mountains, etc. It is normal. We use the word “evil” in describing these things because of the suffering and death that comes in their wake. But earthquakes are not death and suffering itself, nor is a virus.

Sometimes people speak of the world as “fallen,” and go on to describe the world as therefore bad or evil in some manner. “Fallen” is not a term found in the Scriptures, and can sometimes be a bit problematic. St. Paul speaks far more carefully about creation’s problematic state. He says that it was made “subject to futility.”

The problem is death, not creation. Christ’s relationship with creation is interesting. He is asleep in a boat during a storm, unperturbed. The disciples are afraid (they fear death). They wake Him up. He speaks to the winds and the sea and says, “Peace. Be still.”

I suppose He went back to sleep after that. There was nothing “evil” about the winds and the sea, though they could well have sunk the boat and drowned the disciples. Christ “rebukes” fevers. He tells demons what to do. He withers a fig tree.

In Christ, we see a foretaste, or a small glimpse of humanity and creation in its right order. St. Paul describes creation as “groaning like a woman in child-birth” longing for the restoration of this relationship in its fullness. He calls it the “glorious liberty of the sons of God.”

St. Dionysius the Areopagite’s The Divine Names, has a very dense passage on all of this, in chapter 4. He uses a very interesting verb in describing evil, borrowing from an earlier usage of St. Gregory of Nyssa. The word is paryphistimi (παρυφιστημι – a sort of “standing beside”) which essentially equates with the noun, παρυποστασις. It is an attempt to describe the “parasitic” character of evil. It doesn’t exist in and of itself, but is spun out of the will of sentient creatures.

In dealing with the so-called “problem of evil,” it is important to place it squarely in the realm of God’s providential care for all creation. The death and decay to which we are subject certainly have the capacity to draw us towards non-being. Conversely, they also draw us toward repentance, turning towards God and the path of life.

We are not dualists. The battle between good and evil is not a level playing field. The whole of the field is the arena of our salvation and the working out of the whole of creation’s union with God. Even death has a strange place in all of this.

In Christ’s Pascha we hear echoes of this place. Christ tramples down death by death. The very thing that is our enemy is the same thing used to destroy our enemy. It is the ultimate statement of God’s good will triumphing in all things.

Let God arise, let His enemies be scattered. Let those who hate Him flee before His face!

The image shows Christ healing the Leper; a mosaic in the church of Monreale.