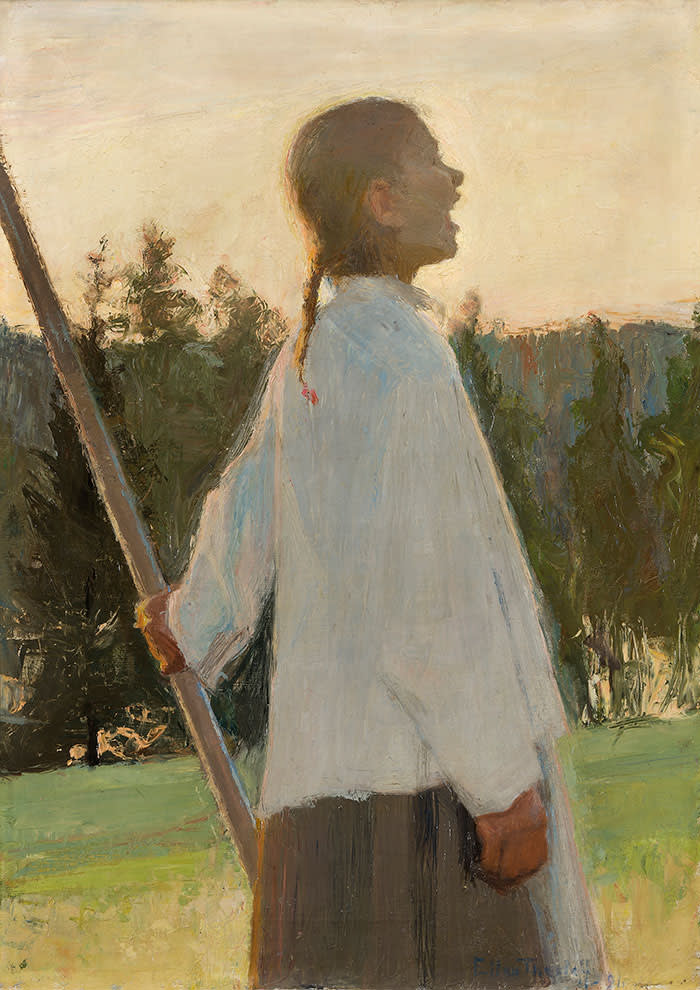 The act of the will is much less known to us than the act of the intellect. However, it is not impossible for the human intellect to prove the freedom of the will basing this proof on the root of freedom which is understood good.

The will is the appetitive power of the intellect, so that before any act of the will can take place, there must be an act of intellect preceding it; for the will is not a knower, it is a ‘goer’. It goes towards what the intellect presents to it as good and appetible and away from what is presented to it by the intellect as being non-appetible.

One could go no further and decide that the will is not free since it is under compulsion to follow the intellect. But the difficulty is this; we are quite conscious that the will is free. This is very obvious from the way we act: for we are conscious when we do something that we need not have done it, that we could have acted in another way; besides, we have laws, and laws pre-suppose that we are free; we have such things as rewards and punishments. Sometimes we praise people and at other times we blame them; all these things point to the fact that the will is free.

The solution of this problem must consist in reconciling these two truths, (a) that the will is an intellectual appetite and must follow intellect and (b) that the will is free to choose this or that or to act or not to act; for no problem is solved by denying either of the terms, for to deny either of them would be to suppress the problem.

The freedom of the will is exercised in the act of choice or election which follows and is subordinated to the act of intellect which is called the practico-practical judgment.

At this point it will be a great help to us to have a good look at these two acts. Here we are considering both these acts as they are about some particular good which of necessity is a limited or a mixed good, mixed, because it is made up of act and potency; for as we see in other places, the will is not free about a pure good or good in common or universal good.

Since the will is an appetite for understood good, and not ‘this good’, by its nature it has to appetise what seems to it to be absolutely good with no admixture of evil. Regarding a mixed good the will is together able and unable to will it. It follows then that when the intellect understands something to be somewise good and somewise not good, the will is indifferent to will it or not to will it.

Still in order to do the elective act, the will must make a choice between one particular good and another, or a choice to act or not to act. But for the will to pass from a position where it is indifferent to act or not to act, or to choose one thing rather than another, and to arrive at a determinate choice there has to be an act of intellect which makes it possible for the will to come to a decision, that is, the will cannot move from indetermination to determination by itself without the intellect intervening, for that would imply contradiction, since to be able to choose and not to be able to choose are contradictories.

In other words, the will follows the practico-practical judgment which is about a paticular good which the will may or may not go for since every particular good has in it a reason to be loved by the will and a reason for the will not to love it.

If the will is going to make a choice it must follow a judgment by the intellect presenting the thing to it as completely good and as completely befitting it. This means that for the will to will the particular good there must occur a change in the practico-practical judgment, so that this change must be caused either by the particular good itself, or by the will, for if two things are not in agreement, they can be brought to agree only by changing one or the other.

Since the particular good remains the same, the change must occur in the will so that the intellect can be presented with a new object by the practico-practical judgment and make a decision about the particular thing in question.

This order of befittingness or coaptation of the will for the thing makes it possible for the intellect to judge that the particular thing it is considering, is that which perfectly suits the will here and now, because now the intellect is looking not at the will alone but at the will together with its dispositions, (a new object). Then, this new judgment by the practico-practical intellect becomes the form according to which the will makes its choice. It is about this new judgment by the practico-practical judgment that Aristotle said “of what sort each one is, such is the end that to him seems good.” In other words we judge as we are disposed.

It follows from this that it is the will itself that causes (efficiently) and determines (objectively) the very form accordiing to which it acts and that it does this not from necessity, since from its nature the will is indifferent to appetise this or that particular good.

But, the question may be asked, how does the will effect this change in itself? The answer is that it does this by using the new judgment put before it by the intellect for this new judgment is the potential mover of the will. It uses it as a man uses a crutch; the crutch moves the man and the man moves it.

Let us recall here two principles: the principle that causes are causes to each other in diverse order of cause. This principle is the key to the problem of free will. (Causation and cause are simultaneous in duration; the priority of the cause is only an ontological priority). The principle of Denis is that every perfection loved, inclines the will towards it. St. Thomas says in Con. Gent. IV, a 19, “the loved is in the will as inclining and in a certain manner intrinsically compelling the living (subject) towards the very thing loved.” It is in this way that the loved is in the lover.

Just as in understanding, something is produced in the intellect, namely a concept, wherein the thing is known and the concept is specified by the known thing—which is the object—so in the will when it loves something, a certain inclination or love or weightedness arises in it, which inclination or coaptation inclines it towards the beloved;.

By this coaptation, which arises in the will, the will is changed and consequently it presents a new object to the intellect. This makes the intellect judge that the thing is perfectly suited to the will and makes it possible for the will to will it. But what makes the will inclined towards the thing in the first place is a certain connaturality of the will with the thing, a certain inclination towards it (there is a certain mystery here). This inclination in the will is a physical reality, specified by the loved thing which makes the beloved present to the will.

It is the will itself that is the efficient cause of its weightedness, it makes itself love by loving. It is by loving that the will produces in itself its lopsidedness towards the loved. John does not love Mary until his love has produced that lopsidedness. So John’s love for Mary is determined by his dispositions.

So it is that the weighted will presents new evidence to the practico-practical judgement which unlike the speculativo-practical judgment (which merely judges that something is good), judges the good thing in relation to the will as it is affected by its weightedness (i.e. by its dispositions.)

The will can will one thing in preference to another only if, by itself, it adjusts itself to it. In this way the will turns an indifferent form into a determinate form (i.e. a ‘can-move’ into a ‘does move’) i.e. uses the practico-practical judgment to make its choice.

In two orders of causality the practico-practical judgment goes before the act of choice, and in two orders of causality the choice goes before the practico-practical judgment. This reciprocity of causes is what is peculiar to the free act, it is found only in the free act. This interaction between the two acts has to be explained.

The will exercises only one act by which it has two influences on the intellect; a) objective causality and b) efficient causality. This act is formally one, but virtually two (causations). As it is efficient it explains the ‘be’ of the practico-practical judgment in the intellect, as it is objective it explains the ‘be-such’ of the practico-practical judgment.

It remains to explain that the loved is in the lover in a different fashion from which the known is in the knower. For the will is not loving the thing as it is something in it, but as it is out in the real, whereas the concept is that wherein the thing is known. “Good and bad are in things but true and false are in mind”.

Although it is true to say that the known is in the knower and the loved is in the lover, it must be realised that the intentionality of the intellect is vastly different from the intentionality of the will; for whereas knowledge is terminated at the word as it is in the intellect, in such fashion that the intellect reposes in it, the loved existing intentionally in the will is there as an impulse whereby the will is weighted and inclined towards the thing outside, although it is vitally elicited by the will for “insofar does it weight the will, insofar as it is voluntary and not from without, for the will is inclined only voluntarily” John of St. Thomas Curs. Theol. IV ed vives 927 disp. 12, a. 7, n XII.

All particular goods are equally unfit to move the will because all of them are infinitely deficient from being a universal good.

Therefore, if the will prefers one particular good to another, it is not necessitated by the object of the intellect (because the intellect is tied to evidence and does not move the will efficiently), but because it chooses to do so.

Therefore, the will is free since it is not under necessity to will what it wills – neither by necessity of nature not by necessity of instinct. It follows that the will can’t will a particular good unless it wills it freely, it is the cause of its own loves. So the two terms of the problem, are solved. The will is subordinated to the intellect, but nevertheless it is free, since it has dominative indifference over its acts.

This proof is reduced to the fundamental doctrine of act and potency since it is because there is potency in things that the will is free about them.

Alice Nelson is a lecturer at the Centre for Thomistic Studies, in Sydney, Australia.