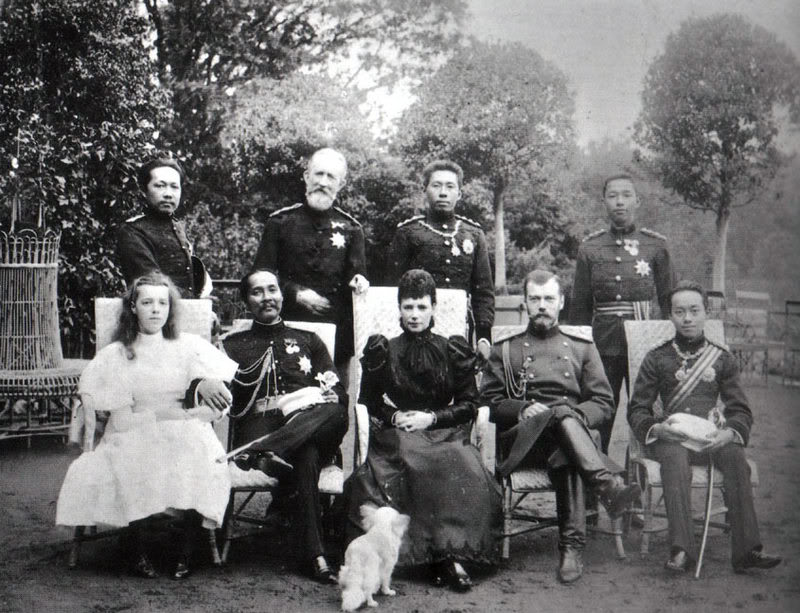 An Orthodox parish appeared in the Thai city of Hua Hin about seven years ago. Hua Hin is situated near Bangkok and it is one of the residences of the King of Thailand. When the members of the Russian Orthodox mission were discussing who to dedicate the new church to, the Orthodox community from the island of Phuket proposed that the church be dedicated to the Royal Martyrs.

When St. Nicholas II was the tsarevich (crown prince), he visited the Kingdom of Siam during his Eastern journey, which makes him the only Orthodox saint who has ever trod this country so far. The factors contributing to the dedication of the church in honor of the Royal Family were: the importance of the monarchy for the Thai people, the Russian monarch’s holiness, and the status of the city as a royal residence. Another weighty argument was the fact that the parish on Phuket suggested donating relics associated with the Royal Family to the new church, namely a medallion which belonged to Princess Tatiana Nikolaevna and the cross that she used to wear on her neck (these were bought by Sergey Yefremov, a parishioner, at an Armand Hammer Auction).

The rector of the Holy Trinity Church on Phuket painted an icon of the Holy Princess Tatiana and donated it to the new church in Hua Hin, and Sergei Yefremov sent them another present from Russia, namely a small icon of the Protection of the Holy Theotokos from the Church of the Feodorovskaya icon in Krasnoye Selo near St. Petersburg (also from the Armand Hammer collection).

Although the community is small, the church started holding interesting annual public and church meetings and concerts, along with other events with the participation of the Russian Federation’s Ambassador Extraordinary to Thailand. Last year there were also Church-wide festivities on the occasion of the centenary of the Royal Family’s martyrdom.

Pilgrims from across Thailand came in buses and their own cars, and at least half of them were Thais—most probably because the tourist season had ended long before and all who remained in Thailand were its permanent residents and a handful of tourists.

Of all the Thais who were present at the church service, one elderly couple stood out: the former commander-in-chief of the Thai Royal Navy, Admiral Varong Songcharoen, and his wife, Vorasulisi (Bhakdikun) Songcharoen, who is related to the New Martyr Nicholas Johnson. Admiral Varong and his spouse had recently returned from Russia where they had participated in an international conference dedicated to the memory of Grand Duke Michael Alexandrovich and St. Nicholas Johnson.

The service was solemn, with an assembly of priests in the altar, and a male choir singing in the church which was packed. After the service Archimandrite Oleg (Cherepanin) delivered a sermon on the podvig of the last tsar and his family and on how much the monarchical system in Thailand should be valued.

After the sermon the choir performed the anthem of the Russian Empire, “God Save the Tsar”, as well as the royal anthem of Thailand, Sansoen Phra Barami [meaning, “Glorify His Prestige” in Thai.—Trans.]. Fr. Oleg spoke on the New Martyr Nicholas. Most of the parishioners knew nothing about him, and the presence of this saint’s Thai relatives in the church was both stirring and mysterious—you immediately wanted to know them better.

When all the prayers were over, the celebration continued in a freer atmosphere—during the festal meal, the choir of St. Nicholas Church sang songs, and students of Sunday schools from Pattaya and Samui Island gave performances.

The program concluded with the launch of a Thai book that was published especially for the feast. The book was composed of selected letters and diary entries of the Holy Emperor Nicholas II and Tsarina Alexandra. The purity of love and faith and the high standards of family relations in their correspondence demonstrates to us an example of family holiness.

The greatest impression came from the illustrations: the photographs of the Royal Family, skillfully colored by the well-known photographer Olga Shirnina (aka Klimbim). The book was launched by the project manager Xenia Bychkova who expressed her gratitude to all those who had worked on this book. The launch in Thai was prepared by a student of the Orthodox theological college in Phuket, Karl Ratchanont Teikoksung. Fr. Oleg presented each Thai who attended the service with a copy of the book.

Reflecting on the Orthodox community in Thailand, I asked myself the following questions: Do we and the Thais understand the meaning of today’s celebrations? How can residents of Thailand, a monarchical state, mark the martyrdom of a monarch of their friend-state?

Hieromonk Micah (Phiasayawong), the first Laotian Orthodox priest: “Today we commemorate Tsar Nicholas and his family: how much they did for the Church and the people! Both the tsar and the tsarina faithfully accepted their crosses. Apart from having the power of the State in their hands, they believed in God, and they taught us to believe in God also. This day is a sad one and a happy one at the same time. When we look at their example of a holy life, it gives us joy, but when we recall how they were killed we feel sorrow. They were the father and the mother of the entire Russian land, and now they are saints and all of us (not just Russians) love them.

People in Thailand know about St. Nicholas II as he did much to help Thailand avoid French and British colonization—he is perceived as the defender of Thailand’s independence. As for Laos, no one knows about the tsar there. Laos is a Communist state, and they have a negative attitude towards royal authority (The last King of Laos, Savang Vatthana, abdicated the throne, after which he and his family were sent to the “Re-education camp,” where all of them perished in about 1977).”

Nicholas Thanaboon Kebklang, a student of the Orthodox theological college on the Island of Phuket: “July 17 is a sad day for the Russians. Exactly 100 years ago [this article was published in Russian in 2018 for the tragedy’s centenary.—Trans.] they lost their beloved state—Russia. Tsar Nicholas II was brutally murdered together with his family. Some may perceive it as a shocking and tragic event—and it is really so. But the tragedy of that fateful day is our today’s joy. Tsar Nicholas and his family became holy martyrs for the Church, and this is a victory, a triumph in Christ. Who is our God? Blessed are ye, when men shall hate you, and when they shall separate you from their company, and shall reproach you, and cast out your name as evil, for the Son of Man’s sake. Rejoice ye in that day, and leap for joy: for, behold, your reward is great in Heaven… (Lk. 6:22-23).”

Archimandrite Oleg (Cherepanin), Dean of the Patriarchal Parishes in Thailand: “Today in Hua Hin, apart from the exploit of the martyred Royal Family we honor Grand Duke Michael Alexandrovich, Many consider him the last Russian monarch, although he was never crowned. He was executed by firing squad in the city of Perm a month prior to the martyrdom of St. Nicholas II’s family. His faithful secretary, who didn’t leave the Grand Duke even in the hardest of times despite mortal danger, was martyred with him. He remained wholeheartedly faithful to Michael Alexandrovich both in the good times and during persecutions even to the point of death. This man’s name was Nicholas Johnson. The Russian Orthodox Church Outside Russia canonized him as a new martyr. His icon lies on the analogion. It turned out that some of his relatives are Thai and reside in Thailand. Notably, one is Mrs. Vorasulisi Songcharoen, the spouse of the Thai Royal Navy Admiral Varong Songcharoen. Two months ago the couple emailed me and then came to the church on Saturday to pray at a memorial service for the repose of St. Nicholas Johnson. However, we didn’t have a memorial service because he is already ranked among the saints; instead, we held a service of intercession. It was then that the couple said that they wanted to attend the celebrations in Hua Hin.”

Vorasulisi (Bhakdikun) Songcharoen, the New Martyr Nicholas Johnson’s great-niece: “My great-uncle, Nicholas Nikolaevich Johnson, the secretary of Grand Duke Michael Alexandrovich, was executed with him on the night of June 13, 1918, in the city of Perm, and was recognized as a new martyr afterwards. We learned about his tragic death not long ago, and on the 140th anniversary of his birth we asked Fr. Oleg (Cherepanin) to conduct a memorial service. Fr. Oleg kindly explained that we shouldn’t pray for his repose now because he is already a saint and what we can do is ask for his blessing. Fr. Oleg helped me understand and accept this tragedy from a more spiritual point of view, even if we are very sorry and sad. Now they are saints of God, and we can no longer think of them the way we would think of all other people. Fr. Oleg helped me perceive this feeling and accept this way of thinking, and I enormously appreciate that. Earlier I had thought desperately: “What a terrible tragedy! Why did it happen?” and so on. Instead of dwelling solely on the tragic aspect of the subject, we all should take into account that it was one of the most important lessons of history we must learn.

“Three weeks ago, I attended events organized in Perm to commemorate Grand Duke Michael and my great-uncle St. Nicholas Johnson. The procession of the cross walked from the city to the chapel built on the hill where the Grand Duke and his secretary are believed to have been killed. It was explained to me that it was a procession of repentance. In my view, the penitential nature of this procession is very important. With so many people and so many priests participating, it was a religious procession of people who had the same sense of remorse for what happened 100 years ago…

“I have been to Russia on three occasions: during the first visit I tried to find my mother’s grave; the second trip was last year because my son wanted to see Moscow; and this year we travelled to Perm in connection with the centenary of my great-uncle’s martyrdom. So, we walked in a cross-procession to the chapel—the supposed place of his execution, then we were present at the ceremony of the unveiling of a plaque in the building where the Grand Duke was seen for the last time; next we took part in the planting of a tree and visited a museum dedicated to the story of Grand Duke Michael and St. Nicholas Johnson. We also participated in an international conference where the tragic events of 100 years ago were discussed in detail from different perspectives: historical, legal, archeological, social and so on. It was also mentioned that it would be more correct to call Grand Duke Michael “Tsar Michael II” because in fact he was the last Emperor of Russia.

“The remains of the Grand Duke and my great-uncle haven’t been found yet, but the search will continue using the most advanced technology and instruments. My cousin and I have provided our DNA samples so the remains could be identified once they have been found. I was happy to have a chance of offering my mite and I pray that the bodies of the Grand Duke and my great-uncle could be discovered and buried in an appropriate manner.”

The original Russian version of this article was translated by Dmitry Lapa, and appears courtesy of Orthodox Christianity.