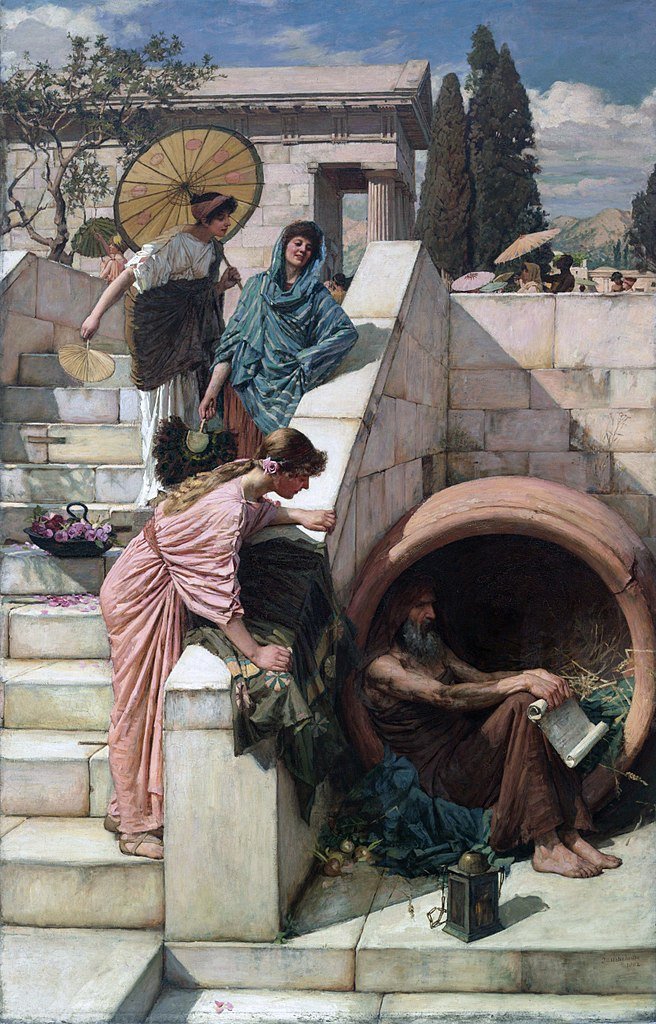 “Philosophy can only hypocritically live out what it says, it takes cheek to say what is lived.” (Peter Sloterdijk, Critique of Cynical Reason)

Cynicism is not the same as cynicism. Cynicism with a capital ‘C’ refers to the truth-affirming provocations of the Ancient Cynics and the specific mode of being of which they are an early representation; while cynicism with a small ‘c’ is, in its ‘postmodern’ form, ideological apathy towards truth and its ramifications for politics and culture. Some prefer to write Cynicism as Kynicism to further emphasize the difference. For now, I shall stay with writing a capital ‘C’ to refer to the concept in question.

What I am about to list as central to Cynicism is the product of a creative interpretation of doxographic and other material that I consider potentially useful for critical theoretical reflections on law, politics and society. Other writers will include different propositions and will have different emphases.

With that in mind, I will briefly cover Cynic elements in respect of style, theory, politics, and self-identity, which I translate to the following headings: parrhesia and embodied truth, antiphilosophy, antinomianism, and cosmopolitical subjectivity.

The most celebrated relation of the Cynics to truth is parrhesia. As Foucault succinctly put it, when a speaker engages in parrhesia, he ‘uses his freedom and chooses frankness instead of persuasion, truth instead of falsehood or silence, the risk of death instead of life and security, criticism instead of flattery, and moral duty instead of self-interest and moral apathy.’

The early reference point is Diogenes the Cynic (circa 3rd–4th BCE). Diogenes fully embraced the appellation Cynic (Kyon=Dog, whence also kynicism), introducing himself as such to Alexander the Great. When Alexander asked what he had done to deserve such a name, he replied, ‘I fawn on those who give me anything, I yelp at those who refuse, and I set my teeth in rascals.’

He saw himself as the kind of dog that all like to praise, but with whom no one dared go hunting.

He poured scorn on his contemporaries: he called the school of Euclides bilious, Plato’s lectures a waste of time, and the demagogues the mob’s lacqueys.

When he saw someone being led away by temple officials for stealing a bowl, he quipped: ‘The great thieves are leading away the little thief.’

On hearing Plato’s definition of Man as a featherless biped, Diogenes presented a plucked fowl with the words ‘Here is Plato’s man.’

And when Alexander wished to honour him by granting any favour, Diogenes asked him to ‘[s]tand out of my light.’

Not surprisingly, he considered parrhesia ‘the most beautiful thing in the world’.

Humour has the capacity to engage both intellect and an immediate, ticklish sensuousness. It has a material quality in drawing upon a rhetorical force beyond pure reason and also in the way it elicits an affect — a knowing smile, a cringe, a burst of laughter.

This brings us to another of the Cynic’s relations to truth, that of ‘bearing witness to the truth by and in one’s body, dress, mode of comportment, way of acting, reacting, and conducting oneself.’ This has traditionally included askesis where the worth of a frugal life — a dog’s life — is demonstrated by the strength and flourishing of the body. This is arguably different from the reactionary denial of the ascetic in popular consciousness.

In sum, Cynic truth is expressed, on the one hand, through witty, humorous, polemical and subversive rhetoric; and on the other hand through the Cynic’s authentic life, one lived in accordance with and as a didactic demonstration of truth. Cynic rhetoric reaches out to the mind and bodily senses while making of his own body a rhetorical device.

With the Cynic emphasis on wit and performance instead of abstract theory, laughter rather than convention, free-spiritedness and risky provocations instead of the disciplinary structures of paradigmatic thought, there is a tendency to view Cynicism as a form of anti-intellectualism, despite a clear — albeit critical — interest in the intellectual pursuits of Platonic metaphysics. Indeed, the Cynic enthusiasm for truth would, it seems, align them with the immense tradition of western philosophy, even if, as Hegel claimed, they had no traditional philosophy worthy of note. But if not philosophy, then what? I suggest we think Cynicism as an early form of antiphilosophy.

If one way to frame philosophy is in terms of its critical concern for truth and its articulation in theory, antiphilosophy, writes Badiou, deposes the category of truth, unravels the ‘pretensions of philosophy to constitute itself as theory,’ looks behind the fallacious mask of discursive appearances, and appeals against the philosophical act towards a radically new ‘supraphilosophical’ act.

Antiphilosophy is less a critique of truth than a therapeutics of truth. It is the cure for the self-satisfied belief of western philosophy in its ability to capture the meta-position of metaphysics, in being able to express universal truth without gaps, lacks, distances, contingencies, insufficiencies and/or a relation to particularities.

Badiou claims that for antiphilosophers like Nietzsche, Wittgenstein and perhaps Lacan, what is important is the ‘distance without measure’ (for example, between individual and subject, god and man, infinite and finite), which cannot be proved within a conceptual framework. For Nietzsche, in particular, his testimony and self-evidence is expressed not only in what he says about philosophy but also — in his Dionysian abolishing of the world as truth — what he does to it.

It is not surprising to learn that Nietzsche also writes that: ‘the higher man must prick up his ears at every Cynicism — whether coarse or refined — and congratulate himself whenever a buffoon without shame or scientific satyr speaks out in his presence.’ Eschewing grand theory and the pretensions of metaphysics, Cynic antiphilosophy combines rhetoric with humour, logic with wit, speech with performance, and truth with embodiment.

Zeno, an initial follower of Diogenes, is credited by Kropotkin as being the ‘best exponent of anarchist philosophy in Ancient Greece.’ In Kropotkin’s words, Zeno ‘repudiated the omnipotence of the state, its intervention and regimentation, and proclaimed the sovereignty of the moral law of the individual.’

While one should be wary of claiming Cynicism as one’s own, there is no doubt that Cynicism, in its parrhesiastic embodiment of truth, tends towards subversiveness. We can perhaps view this subversiveness more generally as analogous to Deleuze and Guattari’s nomadology, where the perpetual movement of the Cynic nomad (the universe as home, see cosmopolitical subjectivity below) collides inevitably with the state apparatus. Cynicism speaks truth to power and lives truth against convention.

For Diogenes, law and the city were considered civilized, where ‘civilized’ was most likely intended as a pejorative term. His view of social norms and civilized law amounts to an early radical antinomianism that preempts certain modern strains of critical legal theory; not only in terms of the idea of contingency, but also in terms of grounding antinomianism in something ‘other.’

However, while the ‘other’ for critical legal theorists is commonly understood in poststructuralist terms as an unknowable beyond, the Cynic other was simply nature and the authority that nature lends as a protoypical form of natural right.

This suggests there may be a constant thread in the intellectual history of subversion, one that resists always in the name of something other, some foundational or even post-foundational other, an other — whether justice, god, nature, etc. — whose complexities and paradoxes the Cynics, in their aversion to grand theory, never tied themselves up in.

On being asked where he came from, Diogenes is said to have replied, ‘I am a citizen of the world [kosmopolitēs].’ Today, theories of world citizenship or cosmopolitanism are based on an idea of human unity from which moral and political commitments are drawn, typically involving the development of stronger global institutions, governance, human rights, and the rule of law.

Given the Cynic tendency towards anti-philosophy and antinomianism, Diogenes’ cosmopolitanism was not a question of human unity and he certainly did not mean the institutional structure of the city made global.

If anything, his cosmopolitanism can be minimally understood as a ‘commonwealth … as wide as the universe’ conceived in dialectical opposition to the bounded city. It was therefore, again minimally, a way to subvert normal citizenship and the laws and mores of contingent social spaces in the name of an ‘other’ cosmopolitical subjectivity.

This is not to say that when we infer the detail of what such a commonwealth might look like (property, wives, and sons held in common, as Diogenes and his epigones are reputed to have said), that this would be without its own problems.

Throughout history, the insolence and shamelessness of Cynicism has tended to be ignored or derided by the mainstream. Yet those same qualities, stemming as they do from a profound sense of alterity and courage to speak out, has also spawned modern admirers, from Kropotkin to Nietzsche to Foucault.

This in itself indicates that, for those interested in radical critique — whether of law, politics, society, or culture more generally — Cynicism has something to offer. But before specifying what, it would be appropriate to mention its major sticking point or aporia.

Recall that the strength of the Cynic bite is drawn from a reliance on the authority of nature. To hold this line, the Cynic must make a decision on the nature of nature (what is the normative content of nature?) without which no lesson can be drawn. However, such decisions are always subject to the limits of the discourses within which they are articulated. Of necessity, the Cynic’s view of nature is, like anyone else’s, a partial or incomplete view.

This is a problem that plagues not just Cynicism, but natural law thinking in general. What Diogenes considers ‘natural,’ others, especially of a different time and place, do not. I have already hinted at the potential for differences of opinion on the content of a ‘universal commonwealth’ predicated upon our ‘cosmic nature.’

But to give a different example: on seeing a young man behaving in a way he considered effeminate, Diogenes is said to have rebuked him: ‘Are you not ashamed … that your own intention about yourself should be worse than nature’s: for nature made you a man, but you are forcing yourself to play the woman.’ We can only speculate what a modern Diogenes would have said when made aware of sex and gender distinctions.

Having duly recognized this significant limitation, what can Cynicism offer us today? I think it is important, firstly, not to monumentalize the Cynics, that is, to dogmatically assert their credentials as the original subversives. It is also important, given the stated problematics, not to simply imitate them, but to draw upon and reinterpret for our time the rich resource of possibility that they represent.

Foucault, in particular, already started to do this in his analysis of their parrhesia. But this is just the beginning. For the critical scholar, Cynicism can provoke myriad questions: Given the limits in thinking a norm-bearing nature, what are the possibilities of thinking a natural law whose particularized content has been evacuated – a kind of denaturalized natural law?

How could this link to a concept of truth or anti-philosophy or would it be more appropriate to think in terms of a philosophical non-philosophy (see e.g. François Laruelle)? What are the possibilities, limits, effects, and risks of using humour to go beyond critical satire and to directly intervene into political consciousness? Is there any value in pursuing Cynical askesis or some updated version of it today? How can we further think a Cynic cosmopolitanism that emphasizes dialectical opposition? And so on…

The photo shows, “Diogenes” by John William Waterhouse, painted in 1882.