Joshua and Zilpah came to visit Nahum and Ruth one Sunday. During their visit Joshua asked Nahum if he had heard of a travel wagon? Nahum said Simon referred to it once in a conversation with a local farmer.

Joshua said he and two of his farmer neighbours were realizing how difficult it was to move workers from one place to another, they had to take small carts of a horse each. He said he had heard that a company in Rome was building them and farmers were finding them such a time saver, and they were even using them to transport family and friend, some held as many as fourteen people. Nahum said he would ask Simon for more information. 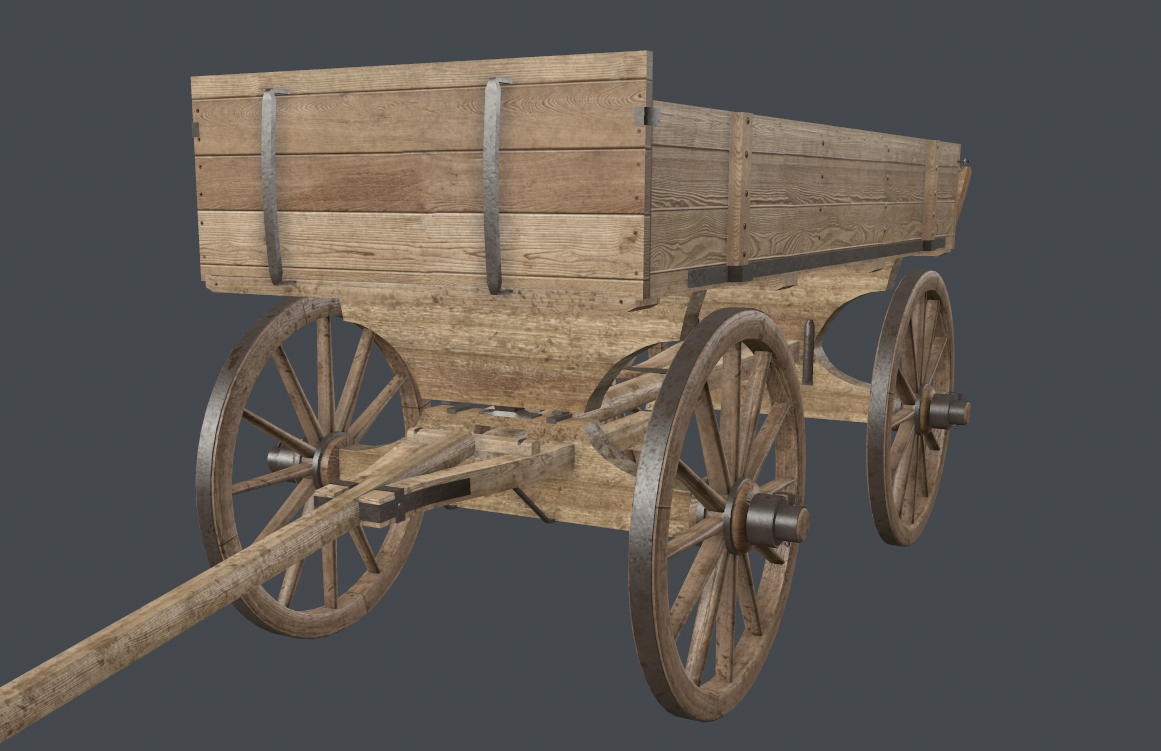 Simon showed Nahum a drawing of a farm wagon that could have seats added to transport people. He had made some in Rome. He said they were easy to build.

Samuel and Ethan said they would make padded leather seats for even more comfort.

The boys completed the three wagons and Ezra delivered them using a team of his well trained horses to pull the first one and tow the other two behind.

The farmers were delighted in their new mode of transport and felt the cost would soon by paid for by the time saved in moving workers. They also appreciated the fact they could take their family all in one wagon now too.

As Elizabeth and Ezra were going to bed Elizabeth leaned over and gave her husband a kiss. She said, Ezra, if nothing happens in the next month we will have to invite our families for lunch again! He sat up and asked are you pregnant, yes she smiled back at him.

Ezekiel was improving every day and was now going out and meeting with Isaac whenever he could. Isaac was giving him an overview of his preaching area and the places where “Churches” had been established.

One evening Nahum surprised his son when he brought Hannah back with him from the shops. Again, she had prepared herself well for the surprise visit, hair all nice, a touch of rouge on her cheeks and another pretty dress.  Nahum had arranged for the two of them to dine at one of the areas nicer dining rooms. They made such a cute couple.

Ezekiel made Hannah’s day when he told her he had decided to stay in Jerusalem area and take over some of Isaacs missions. He also said he was looking to buy property but was not sure where. She was even more delighted when he asked her where she would like to live! Hannah said she had some ideas, but would need to think about them first. Any decision was put on hold for now.

They had a delightful evening and when they returned home Ruth and Nahum sat with them for some time enjoying some of Joshua’s wine, it was a very pleasant evening for all of them. Ruth showed Hannah to the spare room and the family went to bed very happy.

Nahum made his usual bi-weekly stop at Market Man and was surprised when he was asked if Market Man would be able to visit his shops and meet with Ezra. Nahum agreed to meet Market Man at the edge of town on Friday at 8:00 am.

The two men rode to the shops where Ezra was waiting with tea and biscuits for them. Market man asked for a tour and a chance to meet the staff. In particular he wanted to meet Samuel and Ethan. He surprised the two young men when he presented them each with a bag of shekels, a considerable amount too!

He praised them for their quality of workmanship and their creativity. They were pleased, excited and slightly embarrassed all at the same time.  Nahum and Ezra were proud of their “two boys”!

They returned to the meeting room where Market Man produced a drawing of a carriage he had seen recently. He explained to Ezra that he had opened a second store at the far end of town, in an area that served mostly farmers and 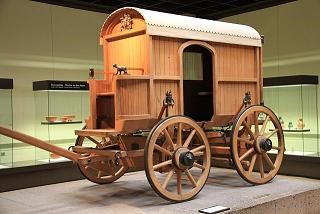 wine growers; it was quite far from his original shop.  He said he was finding it difficult to transport his people, either between shops, to Church, to family gatherings or to other social events so he wanted a carriage! He showed them his rough drawing.

Nahum and Ezra looked at it and asked Market Man if it would be ok to bring Simon and Bart into the meeting, He agreed.

When the two men arrived, Market Man explained how he was so impressed with Jonathon’s carriage and how much use he got out of it. He explained he wanted a carriage similar, but different and told them his plans and ideas.  Ezra noticed the two men smiling and winking at each other when they heard what Market Man wanted, but said nothing.  The two men looked over the drawings and suggested they could come up with their own set of drawings and a cost estimate in a week. Market Man agreed to return next Friday.  He then thanked them for their time, for the tour and the tea and rode home.

When he had left, Ezra said, ok boys what was so funny. Bart said, wait a minute and he left. He returned a few minutes later with two large scrolls. He opened them and he and Simon explained that they had been designing a carriage in their spare time and they thought it would be perfect for Market Man. Ezra told them to take time off and work on the drawings, they said they would, but would also work on their own time too as they really enjoyed the opportunity.

Over the next few evenings and on Saturday and Sunday, the two men worked on their design. Simon was anxious to use some new glass for the windows. A friend in Rome had sent him two sheets carefully wrapped on a board, telling him they were now producing this product in Rome. He wanted to put glass in the doors so the occupants could look out and still be protected from the elements. It had been used for some time in making bottles and baubles, but now they were making it in a sheet form.

While working on the drawings at home, Simon’s niece became fascinated with her uncle’s work. She was fourteen and wanted to be an artist. She had produced some nice art work already. She said, Uncle, I can make a really nice picture of your carriage if you want. He said sure go ahead.

The next day, she asked her mother if she could stay home from school and work on the carriage drawing. Her mother said definitely not. Simon intervened and whispered to his sister that maybe, just maybe, if the art was very good she may get paid for it. Her mother relented and the girl took out her oils and started.

By the time Simon arrived home the next day the picture was on an easel in the outdoor sitting area. Simon was absolutely shocked when he saw it. It was a masterpiece; he could not believe his young niece could produce such a professional piece of art.

He took it to the shop the next day the men were all amazed, they thought the drawing itself would be enough to sell Market Man on the carriage.

The four men sat down and went over the costs of materials and suggested cost of labour. Simon and Bart had a figure in their head as to the selling price, but they wanted to see what Nahum and Ezra came up with.

To their surprise the prices were very close, Ezra being a bit more expensive. He had put in a 10% extra fee for “hidden and unexpected costs” the two men agreed.

They were prepared for Market Man when he arrived before 8:00 am on Friday. Samuel had framed the young girl’s art and it sat on an easel when you entered the meeting room.

When Market Man entered he took a look into the room and stopped in his tracks. He was almost shaking when he asked with a stutter is, is that my, my carriage? They said yes that is what it will look like. He went over to Nahum and hugged him and said you sure do run a professional operation here. He then asked who painted it. When Simon told him, he asked if he could meet the young lady some time, and Simon said when we call you for an inspection of the work progress in about a month I will make sure she is here.

When the boys completed their review of the plans, Market Man was smiling from ear to ear. When they told him the cost, plus or minus 10% he said that is a bit more than I expected, but I did not expect to see the additions of a removable roof over the driver, or the leather bound seats inside. He turned to Nahum and said when I return to my store after leaving here, I will stop at the bank and make a deposit of 20% in your account, please proceed.

The men all shook hands and Market Man mounted his horse and left for the bank.

During the next two months the men made sure all customers were looked after but they really tried to concentrate on the carriage. Bart had completed the frame, the wheels he ordered had arrived, and Simon had built some of the wooden sections and was now working on the doors.  Samuel and Ethan were about half way through making the seats and arm rests. The men told Nahum to arrange for Market Man to come by for an inspection in two weeks.

Ok, Elizabeth said to Ezra, we have to have another family get together.  He said I will tell my dad and he can get word to your folks and Joshua and Zilpah. We should make sure Isaac, Miriamme and Hannah are invited too.

When her mom and dad found out they asked if they could host the party, they wanted to spend time with Paul, and they suggested everybody plan to come on Saturday, stay overnight, go to Church then have the get together next Sunday afternoon. They all agreed.

John Thomas Percival continues working with wood and pondering about the early history of Christianity.

The photo shows, “The Arrival of Caesar,” by Ettore Forti, painted ca. 1890s.