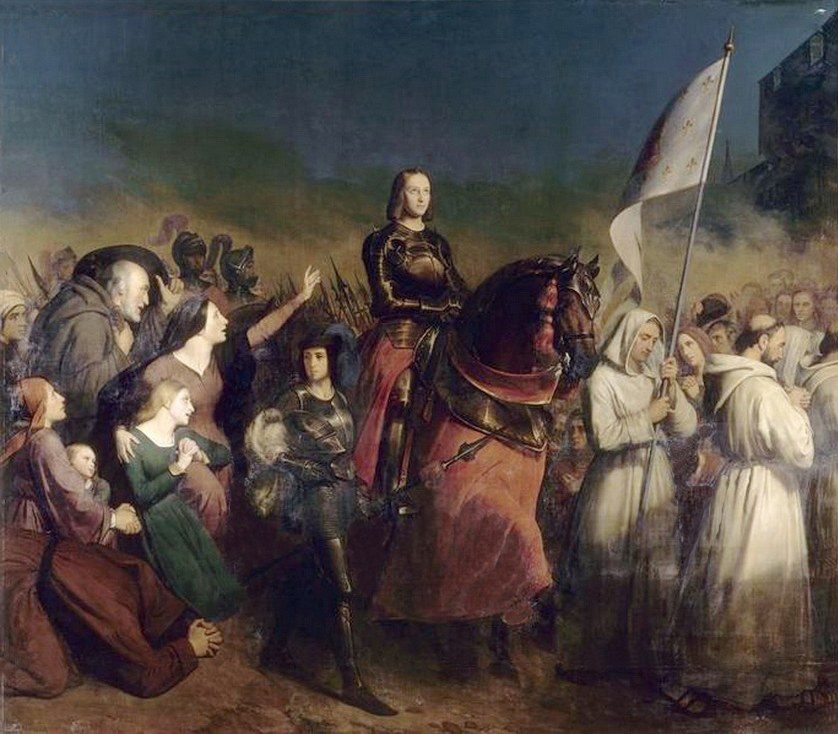 One can only be surprised, at first glance, that feminists have not adopted the figure of Joan of Arc as the standard of their cause. A strong woman if there ever was one, despite her five feet height; the great general of the armies of Charles VII, with a frank tongue, especially in front of those men in gowns, with such virile courage that it never ceases to amaze us. Joan still disturbs the self-righteous of today, as she disturbed those of old. If Christine de Pisan, whom hysterical women would forcibly enthroned as the first feminist, recognized in the Maid the instrument of God, the feminists for their part have abandoned Joan who nevertheless still succeeds in rallying under her banner royalists and republicans, believers and atheists.

Indeed, Joan, well-ensconced in the cohort of saints, is an anomaly, a real-to-goodness head-scratcher. On closer inspection, as the Church did when she canonized her a hundred years ago, Joan is a woman from the soil, attached to a homeland, Catholic by faith and morals. A woman submissive to Her Lord God, Whom she first served.

For Free France, such a charming pleonasm, Joan gave up her life. It does not have to be shown that feminism is a current that sprang from the anti-patriotic, internationalist and communist Left, the one that claimed ninety million lives in the past century. For these universalist ideologues who ape the Catholic Church, it would have been blessed to show Joan as a victim of the Church, burned because of witchcraft, witchcraft put forward today as the emancipation of women. But such an image of the region of Épinal does not stand up to examination of the facts. This good Lorraine girl was burned alive by the English, said Villon. The English – invaders, for centuries eyeing our beautiful country. Foreigners in short, supported by traitors to the country, including Cauchon the bishop. We saw others such, in other times. Nothing new under Satan’s sun.

The saints all promoted universal equality and dignity of the human race; none of them encouraged the dissolution of nations and identities in a babelized sabayon enslaved to a supranational entity. Joan is no exception to the rule.

From the steps of the Kingdom, in Lorraine, God made a saint germinate, to offer her to France. Joan herself says that she “came” to France, guided by her voices. She left her land to save one that was obviously not hers. She has acquired, if it is possible to afford this anachronism, our nationality by the law of spilled blood, like the legionaries. To drive the English out of France was the mission to which she was employed, and we know by heart her famous word, that are difficult today to repeat without attracting the wrath of the Left in the first row of feminists (the violence against the Nemesis collective on March 8, 2020 in Paris): “Whether God loves the English, I don’t know. But He does want them at home.” In these few words, Joan reaffirms that God, Creator of the Earth, has also delimited its territories, assigned to each people, and that it is His will that each one remains in his place. As to whether God loves the English, doubt is always in order…

And then there is that sword that Joan unearthed from behind an altar in Sainte-Catherine-de-Fierbois, guided by her voices. Charles Martel’s sword, which repelled the Arabs, waited there for seven centuries for Joan to repel the English. God’s plan for France spans thousands of years before our eyes, which never ceases to leave disbelievers of all persuasions skeptical.

Virginity also irritates the said feminists. Behind “my body, my choice” is the demand to do anything with your body and to make others and society pay the price. How to associate the one who insisted on having “never killed anybody” with the right to kill children in the womb of their mothers?

Joan may be a virgin; but she is nonetheless aware of the dangers that threaten women, as evidenced by her insistence on keeping her men’s clothes in English jails so as not to be raped. Likewise, the day she jumped from a Beaurevoir tower, preferring to risk her life rather than her marriage. Yet there are other saints who were not spared the infamy of rape. Joan’s virginity bothered her accusers, as it bothers feminists today. What slanderous and scabrous comments has she endured? Joan was truly pure according to her companions in arms, alongside whom she slept in the straw during the campaign. In the midst of the soldiers, like the other men, Joan undressed every evening to heal her wounds. “I would not have dared to approach Joan because of all the kindness that I saw in her,” said Bertrand de Poulengy. And Jean de Metz goes further: “I was inflamed with the words of the Maid and with a love for her, divine, I believe.” So, it was with them, as with other soldiers. Radiant with purity in the midst of filth, by the grace of God, Joan made men better.

This purity, which she treasured, she demanded of her men and also of women. The only time Joan struck with the flat of her sword, it was a whore who violated by her morals the holy war she was waging.

The state of virginity corresponded to her state in life. We must devote ourselves entirely, man or woman, to our state of duty, and the service of God demands an even greater sacrifice. Thus, Joan advised a pseudo-clairvoyant “to return to her husband, to do the work of his house, his household and to feed his children” (During the interview with Catherine de La Rochelle in the winter of 1430.). Hard to swallow for feminists.

We must believe that virginity takes on a special character in the eyes of God because the order of virgins has at least two generals for the armies: Saint Mary at the head of the celestial legions; Saint Joan of Arc at the head of the French armies. The Middle Ages had seen other women lead armies; Blanche of Castille, Joan of Brittany, etc. But they were noble, married and none entered the fray. While the humble laborer’s daughter, Martel’s sword in its scabbard at her side and the banner with the arms of Christ in hand, led the attack, always the first to cry, “Forward,” exposing herself to the thrusts of spears and darts.

What cannot fail to bother feminists more than anything else is that Joan only has “the will of God” on her lips and not her own. Joan’s faith contradicts their rewriting of history. It was Christ who freed women from the bondage in which religions had locked them in antiquity. Just as He freed men. What Christine de Pisan had already said, what Régine Pernoud brilliantly noted. The status of women in the Christian Kingdom was quite different from this perpetual minority to which the Republic forced her in the 19th century. Dignitas auctoritas et potestas enjoyed by women were by God and for God. There is then no need to claim rights against men, in the first place, presented as eternal oppressors of women by feminists.

Far from the bloodthirsty fury fantasized by the bourgeois of Paris, Joan wept loudly for the English dead on the battlefield, not because they were dead; she had kindly asked them to leave France, too bad for them; but because they died deprived of the sacrament of confession.

“Jesus, Mary, God served first.” It is self-forgetfulness that is disturbing in our hours of individualism. No ego in Joan, just the notion of service. With exemplary piety, Joan had prayed every day since childhood, all the time; going to confession before each battle. She demanded the same of her soldiers – the state of grace. Every Sunday, Joan traded in her war clothes for her best dress before going to Mass. Joan received Communion as soon as she could, something unusual at that time. Even excommunicated at the end of her sentencing trial, her despicable jailers could refuse her the Holy Communion which she received a few moments before going up to the stake. “I will not last a year,” the Maid had predicted. And the nineteen-year-old martyr was never been seen prophesying her death in this way and extinguishing herself in the midst of the flames, repeating the sweet name of “Jesus.”

“In effeminate times,” in the words of Saint Hildegard of Bingen, God arouses women to put men back in their place as men, as if to make fun of them. And that, ultimately, feminism cannot accept.

Élodie Perolini is a writer, editor and mother, who loves writing about France and God. (This article appears through the gracious courtesy of La Nef).