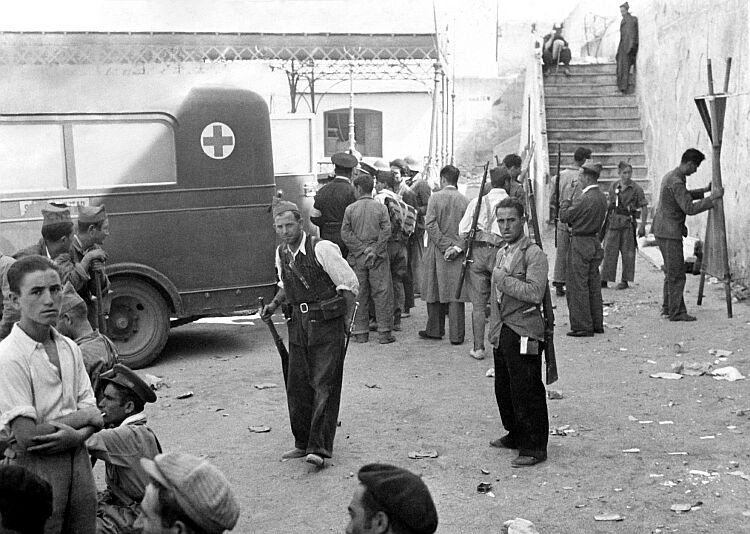 When Brigadier General Federico Fuentes Gomez de Salazar died on January 15, 2018, just before he could celebrate his 100th birthday, he was the last surviving defender of the Alcazar of Toledo. His remains were deposited, according to his will, in the crypt of the Alcazar, where he had been the director of the museum for nearly twenty years.

Who does not know the epic story of the defense of the Alcazar of Toledo? As soon as the uprising began, Colonel José Moscardó Ituarte, military commander of Toledo Square, joined the movement. On July 22, unable to confront the opposing troops that General Riquelme sent from Madrid, Moscardó and his men took refuge in the Alcazar.

They were joined by a group of civilian volunteers (including Federico Fuentes who was then seventeen years old), and by the families of many defenders. A total of 1203 combatants, including 107 volunteer civilians (60 young Falangist activists, 5 Carlists, 8 monarchists, 15 right-wing independents and 1 radical who would take on the most dangerous missions under Captain Vela and who would suffer the heaviest losses), along with 564 non-combatants (mostly women and children).

Very quickly, surrounded by much larger numbers, they were bombarded without respite by artillery and enemy airplanes. But all to no avail! The Alcazar resisted and did not surrender. One by one, the multiple assaults were driven back. Two powerful mines shattered most of the walls, but when the assailants jumped through, certain of victory, the survivors sprang from the ruins and repelled the onslaught again and again.

In two months of terrible fighting, from July 21 to September 27, 1936, only 35 men deserted, who were largely worried about the fate of their families, whom they wanted to join at all costs.

Of all the dramatic episodes of the siege of the Alcazar, the best known is that of the telephone conversation of Moscardó with his son, Luis. Arrested in Toledo on 23 July by far-left militiamen, Luis was threatened with being shot if his father and the Alcazar did not surrender. The few brief phrases the two men exchanged quickly go around the world:

Luis: Dad!
Moscardó: What’s going on with you, my son?
Luis: Nothing, at all… they say they will shoot me if the Alcazar does not surrender. But don’t worry about me.
Moscardó: If it is true commend your soul to God, shout Long live Spain, and you will be a hero who died for her. Goodbye my son, a big kiss, with much love!
Luis: Goodbye Dad, a big kiss, with much love!
Moscardó: You can all spare yourself the waiting for end of the deadline and start shooting, my son. The Alcazar will never surrender!

The threat would be carried out, not on the same day, as the ABC newspaper in Seville said at the time (a mistake reproduced in France by Henri Massis and Robert Brasillach, in the first version of their book The Cadets of the Alcazar, published in 1936), but actually a month later. Luis was shot in Toledo on August 23, along with eighty other inmates.

Taken with the other prisoners to the Puerta del Cambron, he was executed at the foot of the wall of the imperial city. All along the way, clutching his rosary, the condemned man prayed in a low voice. About his son, Moscardó later wrote: “He twice shouted, ‘Long live Spain! Long live Spain! Arise, Spain!’ and fell before the Marxist rifles, for God and for the Fatherland.”

The colonel learned of the tragic death of his two sons José and Luis (one in Barcelona, the other in Toledo), on the day of the liberation of the Alcazar (September 28, 1936). Asked years later, he said: “That moment was so hard and so cruel that I felt my legs crumble under me… this was the price of my glory. I will never be able to feel the slightest pride for an act that my children have paid so much for!”

Though well established, the facts have always and largely been disputed by the historiography favorable to the Popular Front. The “symbol of Francoist hagiography” could not fail to provoke controversy.

The first critical version was conceived by the American historian, Herbert Matthews. In his book, The Yoke and the Arrows (1957), based on various testimonies, including that of the painter, Quintanilla, Matthews questioned the essence of this episode, believing that “the story was too good to be true.” He claimed that Luis Moscardó was a 19-year-old soldier who died in Madrid, while defending the Montaña barracks; that telephone communication was impossible because the line was cut; and that finally the refugee women and children were just hostages.

Authors that came after him, claimed that Moscardó had not dared to surrender because his own comrades-in-arms would have shot him. Others added that under no circumstances did the Republicans intend to carry out their threat.

Finally, some authors went so far as to suggest that Luis was a coward and that his father would have liked to have him shot. These aspersions and slanders would have not deserved attention had the version imagined by Matthews not itself been taken up by historians and journalists, such as, Hugh Thomas (1961), Vilanova (1963), Southworth (1963), Cabanellas (1973), Nourry (1976), or more recently Preston (1994) and Herreros (1995).

But in 1997, in their book, El Alcázar de Toledo. Final de una polémica (Madrid, Actas, 1997), historians Alfonso Bullon de Mendoza and Luis Eugenio Togores, have gathered sufficient evidence to silence the controversy. Luis was actually 24-years old and not 19. He was not in the military, since he had done his military service four years earlier. He was not in Madrid, but in Toledo.

His mother had begged him not to join his father and not to leave her alone. He was arrested on July 23rd, imprisoned with his younger brother, Carmelo, and shot on August 23rd. The phone line was not cut. It was controlled by the militiamen who occupied the Toledo telephone exchange. They could connect or disconnect, as they pleased. Five officers, present in Moscardó’s office, had witnessed the scene. One of Colonel Moscardó’s officers, Commander Cirujano, immediately left the office to gather and inform all the defenders.

In a 2010 interview with ABC, General Fuentes said, “I can testify to the veracity of this conversation in which the colonel sent his son to his death. There is also the telephone operator, a young soldier, who listened in and later recounted the conversation. I was next to the office with several people – a cadet, my brother and my cousins. But we could of course hear that Moscardó…”

In the Toledo Provincial Deputation Building, where Luis Moscardó was being held, there was another prisoner who also testified. This was Luis Moreno Nieto, who was later a ABC correspondent for nearly fifty years. Moreno Nieto reported that he saw Luis come out really upset. His statement would be corroborated by two other people present in the presidential office of the deputation – the caretaker and the telephone operator.

In fact, Cándido Cabellos, lawyer, head of the Toledo militias, and the “republican” intermediary of the commander of the Alcazar, had several militiamen around him, four of whom testified after the Civil War. As to the possibility that non-combatant civilians were hostages, it is simply a non-starter. Of the 564, 16 were in fact prisoners who were never used as bargaining chips. We have the exact list of the names of the besieged, who were all decorated with the Laureate Cross of San Fernando.

In a recent biography of Franco, the historian and polemicist Paul Preston, close to the Spanish Socialist Party, also persists in denouncing the alleged hostage-taking and criticizing the “apocryphal legend” of the telephone conversation. No doubt he did not bother to read the few honest and edifying testimonies that appear in the archives of Moscardó, and which is given below:

Here is first an excerpt from Matthews’s letter to the widow of General Moscardó, dated September 20, 1960:

“Dear Madam, I am writing to you at the suggestion of some friends who informed me that the passage in my book, The Yoke and the Arrows, which refers to the Alcazar has pained you and your family. I regret this and I beg you and your family to accept my most sincere apologies… I am convinced, having read the arguments of Manuel Aznar and discussed this case with trustworthy people, that I was completely wrong. I am preparing a revised edition of my book … and I can assure you that the chapter on the Alcazar will no longer be included.”

On June 25, 1960, the historian, Hugh Thomas, who had also given credit to Matthews’s version, also retracted. He wrote a letter, published in The New Statements (then reproduced in the ABC of June 29, 1960), which read: “After a full search… I have come to the conclusion that I was wrong… I would like to offer my sincerest apologies to the members of the Moscardó family, in particular to the general’s widow, Doña Maria Moscardó.”

In another letter, dated June 15, 1983, the French journalist from Le Figaro, Philippe Nourry, also author of a book on Franco, wrote the following words: “I am sorry indeed to have made this mistake concerning the reality of the telephone conversation between Colonel Moscardó and his son Luis. I understand that it must be very painful for the Colonel’s family to find that doubt continues to hang over this glorious and dramatic episode of the Civil War. Certainly, the extract from the notebooks, which you have just sent me, obviously provides irrefutable proof of the truth of the facts.”

The author of the anti-Alcazar legend, Herbert Matthews, kept his word. In the revised edition of his book, he writes: “There is no doubt that the conversation took place, that the father had to suffer this agony and that his son bravely faced death.” Then he concluded bluntly: “Everything was really according to the best and worst of the Spanish tradition.”

In the new Alcazar Army Museum in Toledo, Colonel Moscardó’s office remains one of the main attractions, although one can no longer listen to the moving but fictive reproduction of the historical conversation between father and son. Interviewed by the ABC in 2010, at the inauguration of the museum, General Federico Fuentes concluded with a lump in his throat and wet eyes: “A civil war is the worst thing that can ever happen.”

The image shows a scene from the siege and defense of the Alcazar.

This article was translated from the French by N. Dass.