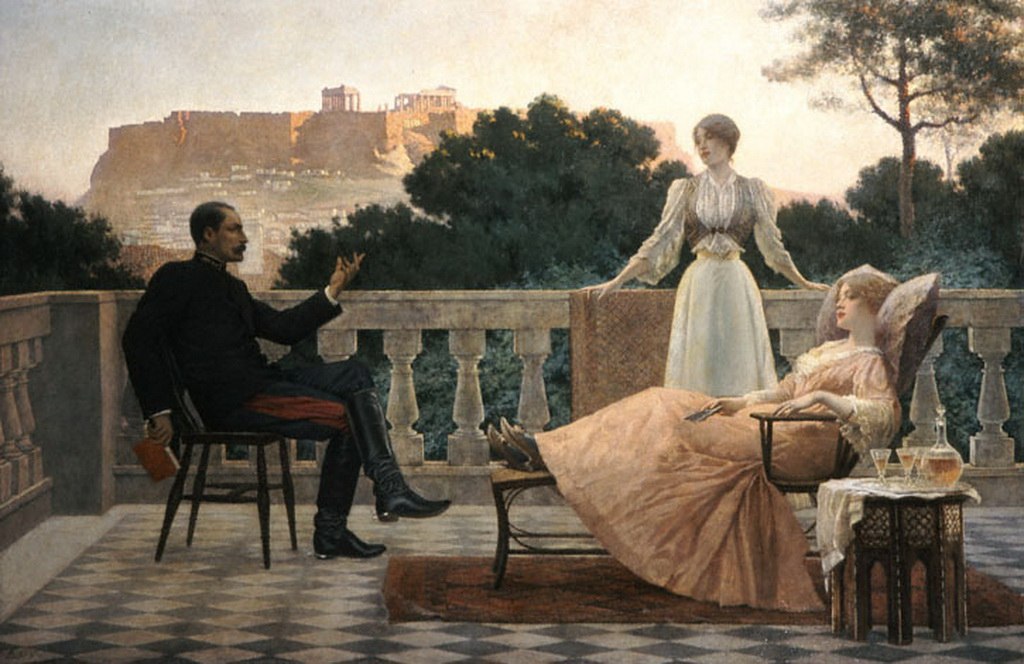 It was in the town of Miletus, on the shores of the Aegean Sea, that an Ionian Greek named Thales (ca. 640-546 BC) first recorded his thoughts about the origin and nature of the universe. In so doing he became the first western philosopher.

No one really knows why philosophy began in ancient Greece, but it is interesting to note that it began not on mainland Greece but on the edges of the Greek world, where there was no doubt much mingling of different cultures and ideas.

What makes Thales unique is the fact that he sought to understand the world as a whole. He wanted to find a single basic substance or element from which everything is made.

Thales speculated that this single substance was water, and he said that everything (including the gods) was made from it. This way of thinking certainly has modern parallels since early in the twentieth century, scientists believed that everything originated from hydrogen, which when combined with oxygen forms water.

Thales no doubt noticed that although water normally exists in a liquid state, it can also exist as a solid and as a gas. This may have given him the idea that its liquid form is the basic ingredient from which everything else is made. He also thought that the earth itself floated in water.

Another thinker, also from Miletus, who lived during the same time as Thales, was Anaximander (ca. 611-547 BC), and he thought that the primary substance is a boundless, indefinite “Something,” taking as many different forms as the things we see. He believed that the earth was a cylinder, with a flat top and bottom, upon which people lived. This is the earliest theory that we possess which states that there is no true up and down.

Another thinker from Miletus, Anaximenes (ca. 590-525 BC) also wanted to know the basic element from which everything else is made. He said that this basic ingredient was air, which takes solid or liquid form when condensed, and gaseous form when rarified.

About the time of Anaximenes, just north of Miletus, in the city of Ephesus, another thinker named Heraclitus (ca. 540-470 BC) was saying that at the heart of all things there burns an eternal, all-consuming fire. He said that it was from this fire that everything else was created and it was to this fire that everything eventually returned. Heraclitus sometimes identified fire with “Logos,” or Universal Reason, as the law of change.

However, it was the speed of movement of physical fire that gave Heraclitus the bridge that he needed to the second part of his philosophy, which was that everything is in a state of perpetual flux. In his famous quotation, he stated that a person could not step into the same river twice, since it is not the same water both times.

The third part of Heraclitus’s philosophy was his belief that the change which is at the heart of things is always expressing itself in a struggle between opposites which, when they do come together, produce types of unity, and then dissolve again. This is very much like Hegel’s (1770-1831) much later theory of thesis + antithesis = synthesis.

The early theories of the universe are in a sense scientific as well as philosophic because they are hypotheses about the natural world. But these early thinkers had little or no conception of inductive methods of experiment and verification as they are used today.

Their search for a single substance probably sprang from a desire to find an underlying unity in life itself, which is one of the deepest desires of the human spirit. Moreover, the concepts in terms of which they thought were not the same as ours, of course.

Part of what makes the thought of any early epoch so very hard to understand is the subtle change that occurs in the meanings of concepts throughout the centuries.

However, these early Milesians and Ephesians prepared the ground upon which later great philosophers like Socrates, Aristotle and Plato would securely plant their own ideas, which would then germinate and grow into the vast tree that philosophy is today. 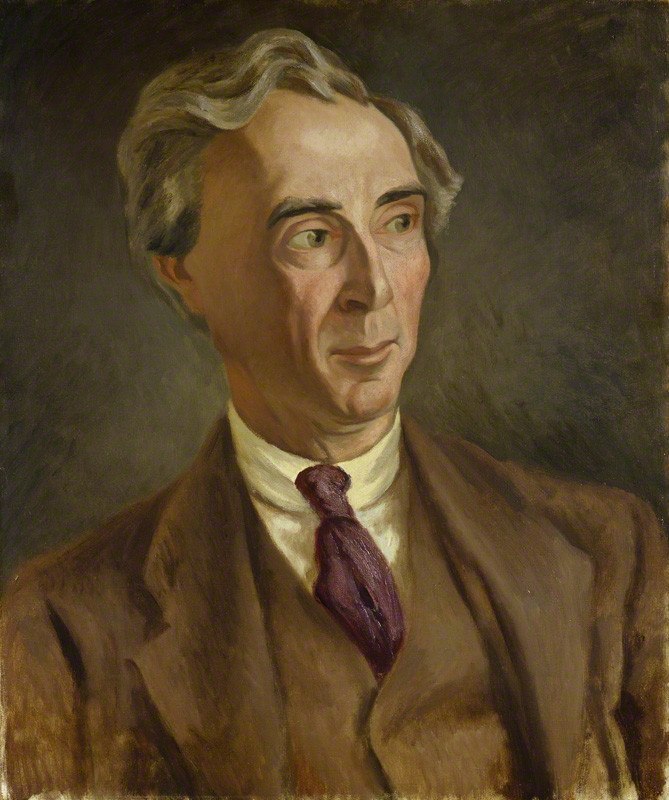 The core of Bertrand Russell’s philosophy is certainly logic. But overarching this agenda is the theme of language and the physical world.

In fact, he uses logic to uncover the structures of language and of the world, which leads him to see a cohesive force existing between the two. When both are reduced to their simplest level, an immediate and intimate connection is revealed, which ultimately is a relationship based entirely on denotation.

Thus, in the simplest elements, or “atoms,” of language, we have the demonstrative pronouns “this” and “that,” and in the atoms of the physical world we find the sense data, which are little pieces of information that our senses collect. Therefore, for Russell, the connection between language and the world is created by demonstrative pronouns, which are used specifically to refer to the sense data.

This is in fact a naming process, which then becomes our immediate practical connection with the world outside. The theme of language and the world serves as the necessary justification for Russell’s logic to exist in the first place.

However, this theme also launches Russell’s inquiry into the nature of natural language, that is, the languages spoken by all of humankind. Once we begin to reduce language into its naming capability, which interestingly enough is also its atomic existence, its “this” and “that,” only then do we confront the need to see how and why it exists as it does.

Language exists in order to give meaning to the world outside us, but it extends that meaning in different ways. Yet natural language is also filled with denoting expressions, and we, as speakers of natural language, want to see these expressions as names. However, this is not the case.

According to Russell, denoting expressions (for example, “some people,” “all people”) are not names at all because they have no meaning in themselves. In fact, these expressions do not refer to specific objects in the physical world.

Rather, they are incomplete symbols, by which he means symbols that do not have meaning in isolation, but that their meaning becomes evident only in a certain context. Therefore, when Russell seeks to explore the atomic existence of language, he is in fact seeking to uncover the workings of a logical language (an ideal one), in which all names would only be proper names, which in turn would only refer to data.

The theme of language and the natural world further shows us that natural language is in fact misleading; it continually deceives us, for it cannot properly refer to the world outside, since the objects it seeks to name, it cannot properly name because of confusion.

The cause of confusion is housed in the very structure of natural language: in its syntax. Upon examination we realize that natural language handles all substantives in the same way: they are seen as names or designators. Therefore, natural language can never truly name the world.

Only logical language can perform this function, which can properly differentiate between a name and an incomplete symbol.

When we seek to equate natural language with the world, we fall into the conundrum of whether existence is a predicate or a property; whether it is an object to be named. Russell suggests a way out.

He proposes that we see existence as an attribute of propositional functions, that is functions that may be instantiated (that is, how we understand them). Consequently, logical language names that instantiation, that understanding, and those names that do not refer to this instantiation are in fact descriptions disguised as names, or camouflaged descriptions.

This is Russell’s way of saying that all propositions are either true or false.

The theme of language and the world can further be enlarged to include the difference between semantics and pragmatics. Semantics studies the truth conditions of sentences (which is Russell’s logical language as a tool to properly name the world), while pragmatics deals with the actual use of sentence by users in different context (the function of natural language).

And it is the truth condition that Russell is largely concerned with. However, this endeavor also proves to be a problem, since an ideal language really only exists with Russell, though he strives to universalize it. In fact, the theme of language and the world serves to highlight a distinct problem.

When we speak of creating a logical, ideal language, we fall into the very structures of natural language, which Russell wants us to escape, in that our concerns are no different: the desire to name.

Although Russell accepts the notion that naming necessarily involves a desire for truth, he constructs a system that seeks to follow the very patterns that he seeks to overcome. In other words, his logical language is no different from natural language, despite his desire to make it different, and logically consistent.

In the end, he poses questions to which there is no hope of answers. His construct of a logical language is ultimately needless since it is difficult to say whether natural language deceives us. But what is evident is that philosophers often misuse natural language, so it gives the appearance of deception.

However, this misuse is overcome by common usage, and it with this concept that the rupture created by Russell between natural language and the physical world can be closed. Common usage allows us to make statements that are both true and false about non-existent things, and such statements do not confuse us at all, nor by making such statement do we instantly start believing in these non-existent things.

For example, many people study and write about ancient gods, but none become believers as a result of their own statements. There is a capacity in natural language that allows us to interact with the world, without becoming estranged from it.

And lastly, the theme of language and the world demonstrates the fact that in the age-old philosophical problem of the divide that supposedly exists between the mind and the body, Russell seeks to order the world by way of the mind, that is, his logical language. And yet natural language shows us that the divide between the body and the mind is a false construct, a false problem, which does not need solving, but rather dissolving.

It is without a doubt, however, that Russell’s contribution to modern thought is profound. He has given a logical structure to mathematics, to the sciences and to philosophy.

Nevertheless, when he extends logic into a model that will encompass all of being, he presupposes a structure that is ultimately a reductionist one, in that everything is reduced down to its bare minimum, the atomic level.

Rather, natural language works in the way it is meant to work, and it does not behave according to the rules of logic, despite Russell’s attempts, because natural language is grounded in human behavior, and the logic of one man cannot become a universal logic for all, for we can never know the minds of other, which is where natural language resides.

And it is here that Russell’s logic and skepticism stumble, which becomes evident in the theme of language and the physical world.

The photo shows a portrait of Bertrand Russell, painted by Roger Fry, in 1923.