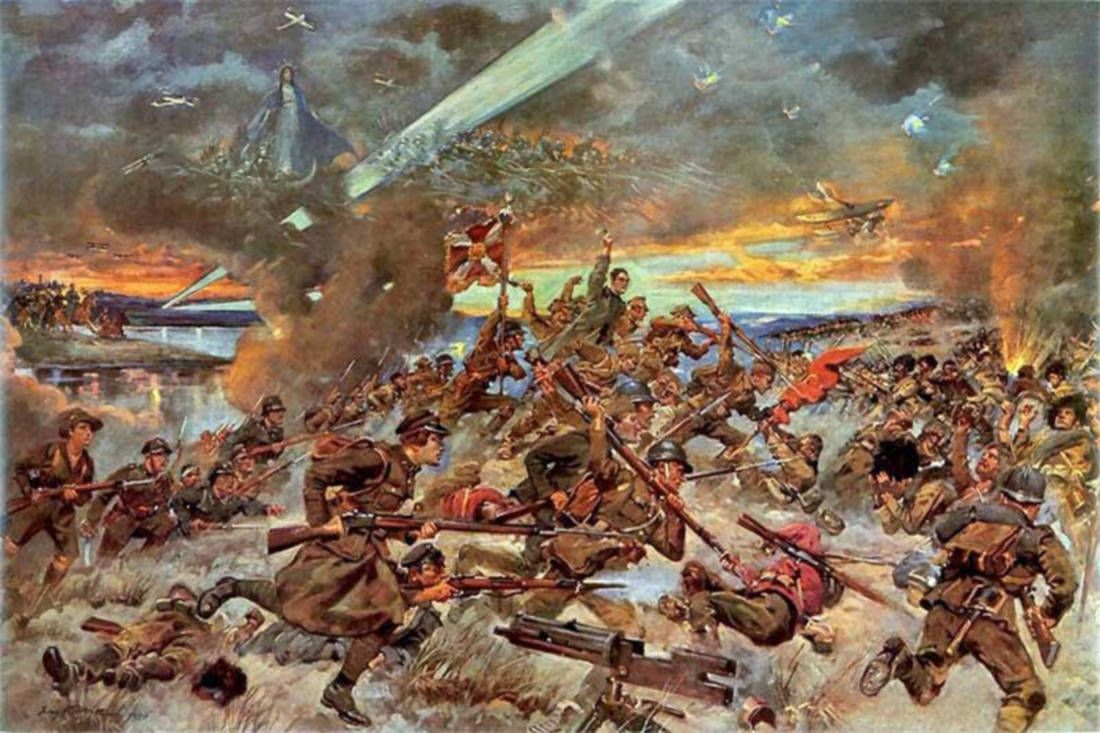 The famous book, The Sleepwalkers: How Europe Went to War in 1914, by British professor Christopher Clark, investigates World War I, diagnosing it to be more of a tragedy than a crime. The Great War was started by the “sleepwalkers” of the title, who were unaware of the historical scale of the catastrophe they were perpetrating. Not only did the hecatomb of victims and the scale of the destruction prove to be cataclysmic – but, above all, there followed the collapse of the European political order, admired by many to the present day as the “beautiful 19th century.”

Six years ago, when the centenary of that war took place, Clark’s book became the “political bible” for politicians and intellectuals who, smacking their lips with appreciation, discussed its thesis at countless conferences, always concluding with the same caution against repeating the “sleepwalking” precedent.

Looking from the Western European perspective of la belle époque, which was brutally interrupted by that war, one may say that this kind of narration dictated to Europe by Clark is not only logical but also nobly moral. However, what must strike a Pole in this narrative is the radically different experience of the 20th century in Central and Eastern Europe. And it is a difference that a contemporary French, Italian or even German probably does not notice, let alone accept.

One of the most famous passages from Polish literature, kept in the memory of every Pole from school-days, is the prayer from the Pilgrim’s Litany by the greatest Polish poet, Adam Mickiewicz: “For universal war on behalf of freedom for the nations, we beseech Thee, O Lord!” This prayer is regarded as a prophesy about the outbreak of war which, after more than a hundred years of occupation, would finally bring Poles freedom and the possibility of living in their own country. In this Polish narrative, 1914 is neither a “crime” nor a “tragedy.” Quite the opposite – it is a historical declaration of freedom restored four years later. And the unexpected result of that war entailed the fall of the three occupying emperors: German, Russian, and Austrian.

This was a key moment for the Polish understanding of the world and the position of Poland in it. Having won the war, England and France paved the way for Poles to regain freedom; and thus, these two powers were inscribed as “friendly” and “allied” in the code of Polish political self-awareness, passed down from generation to generation. But that is not all. Every child in Poland knows that the victory was only possible because of the fact that the Americans entered Europe for the first time in history. When they left the continent shortly after, disgusted with the quality of European politics, it did not take long for the tragedy to strike again – the Second World War. So, this belief in the almost “magical” power of American presence in Europe became deeply rooted in the political DNA that shaped the identity of Poles.

The Polish state, reborn in 1918, could not think of itself other than in terms of some broader Central European union. Obviously, it was a memory of the old days gone by when the Lithuanian Jagiellonian dynasty ruled a vast federal power with two capitals in Krakow and Vilnius. Although there were other ethnic categories (for which the Polish national movement was leading the way in the new statehood) – the fact that Józef Piłsudski came to power (on the day of the historic Armistice of Compiègne on November 11, 1918) meant that it was not “nationalists,” but “Prometheists” that came to define the post-war mission of the Polish state. The military alliance with Ukrainians and Belarusians (who were also liberating themselves from Russian domination), meant to re-establish a union in Central and Eastern Europe, broke down under pressure from the Bolsheviks.

Thus, there was barely enough strength left to defend the endangered Polish statehood against the Bolsheviks who, in the summer of 1920, gathered just near the outskirts of Warsaw. It was also impossible to marshal enough energy to renew the idea of a union in Central Eastern Europe. Although such a union was not formed then, and this part of Europe was soon to become a battlefield of nationalism, nevertheless, immediately after the Great War, this period became an echo constantly resounding in Polish politics throughout the last century until today.

Primarily, it is an echo of a dream of political integration which could no longer be established specifically in the centre of the Eastern part of Europe. Over time the inability to maintain such a state of affairs became more and more obvious. However, the dream could be realized through a great European integration project for the whole of Europe. One should bear that in mind in order to understand the enthusiasm of Poles for their own accession to the European Union in the 21st century, but also the enthusiasm for its enlargement to include Ukraine, Belarus, Moldova and Georgia. The peculiar “transfer” of the Union to the East has built the political mission of the contemporary Polish state; and without awareness of this fact, it is impossible to understand the Polish policy of the last 25 years.

Unfortunately, there is also a distant echo ringing loudly in Poland’s memory of the fact that at a time when in 1920 all Polish plans threatened to fail, as did the very existence of the Polish state, the “allied” and “friendly” European powers, in particular England under the rule of Lloyd George, paradoxically took the side of the Bolsheviks. This was at the same time as the Spa Conference when the Polish government was forced to surrender to Soviet Russia half of its territory – that is everything that the Russian Tsars forcibly appropriated themselves in the 18th century.

Never again has it been possible in Poland to eliminate this intuitive distrust of European “friends,” a distrust further strengthened in September 1939 and which, in fact, continues to this day. In turn, however, the still resonating echo of those events also provokes a particular Polish sensitivity to harm and the rejection by Europe of Ukrainians and Belarusians, i.e. the only nations that a century ago faced the Soviet threat with armed force, alongside the Poles. Everyone who wants to understand today why over a million Ukrainian immigrants, who have been welcomed with open arms, live and work in Poland need only remember this previous anti-Soviet alliance. Also, we will learn about this alliance at the European Union Summit, where the Polish Prime Minister is (successfully) striving for a plan for extensive economic support of Belarus which is to start when its citizens manage to remove the tyranny that has prevailed there so far.

In his famous book, Professor Clark proved that the echoes of the Great War are clearly heard in contemporary politics. And this is certainly true. However, the Polish echoes resound a bit differently from those heard by the great British historian.

Jan Rokita is a Polish philosopher, opposition activist in the communist era, former MP and deputy of the Sejm (the lower house of the Polish Parliament).

This article was published in the monthly Wszystko Co Najważniejsze (Poland) as part of a historical education project of the Institute of National Remembrance.

The image shows, “Cud nad Wisłą” (“Miracle on the Vistula”), by Jerzy Kossak, painted in 1930 (Museum of the Diocese in Torun).