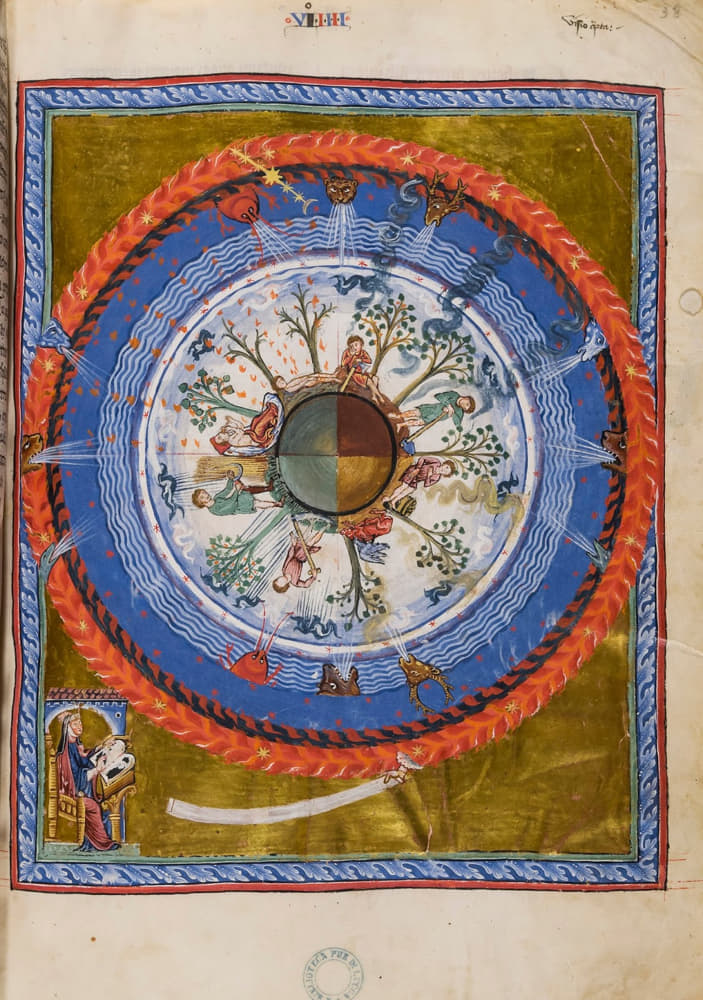 The Middle Ages still have a lot to teach us. This is the lesson that the historian Jérôme Baschet delivers to us in Corps et âmes. Une histoire de la personne au Moyen Âge (Bodies and souls. A History of the Person in the Middle Ages). Contrary to appearances, medieval Christianity was not dualistic. The body and the soul drew the contours of the human person—an “I” against a background of interpersonal relationships, far, far from Cartesian dualism. A lesson for our time!

The body and the soul are opposed, according to monotheisms. Even more so with the Gnostics, with what has been called the “demonization of the cosmos.” A demonization that included man, who is part of it—impure body; soul that tends towards purity. The scheme was comfortable. It outlined however a fatal spiral: the radical dissociation between the felt and the desirable. Between the sensible and the Good. Between what is and what must be.

Of course, the soul can improve itself, and the body too, but certainly not one against the other. This is the problem—we have pitted one against the other too much. The soul against the body, or the soul without the body—which is the same thing. And that’s how it has been since the Middle Ages, we are told. But what if it was the opposite? What if things have been like this since the end of the Middle Ages? And what if the body/soul dualism was established especially since, and with, modernity? What if it was since the mutation of Christianity into a religion more and more external to the life of society, more and more doctrinal, less and less popular, that the duality between body and soul had taken on pathological forms? That this duality had become dualism?

It is the purpose of Jérôme Baschet to clarify this question. He is a historian, but not only. He also takes a philosophical look at this period of our European history. The breadth of his views and interests allows him to put Europe in perspective, in relation to other civilizations. Jérôme Baschet has two or three things to tell us. One is that the Christian Middle Ages saw a duality between the body and the soul, but that this duality is not a dualism. There are not two separate principles. What prohibits dualism is the idea of the human person. It is in this same perspective that we will see later that the communitarian personalism of the 1930s to 1950s is neither the rule of the masses nor individualism.

The second thing that Jérôme Baschet has to tell us is that the Middle Ages, which lasted a thousand years, are not static. And what we see is that they evolved in the following way: they were less and less dualistic. As Christianity permeated society, it made more and more room for the body. The more Christianity became a civilization instead of a religious doctrine, the more room it made for the body. It is the shift from the idea of God to the Incarnation that makes Christianity less dualistic. Perhaps also less Christian and less Judaic. More Europeanized. Now it is the opposite, Christianity, with Bergoglio, has become decivilized (Renaud Camus). It has returned to its origins.

Against dualism, the Middle Ages thought of the person. Persona. The etymology refers to “wearer of a mask.” It goes back to the Etruscans, and at least to Boethius, in the sixth century AD. True or false, this etymology means that we have a role to play. A mask is a role. And it’s not necessarily concealment. But this role does not exhaust our whole identity. The etymology of “person” also refers to “that which resonates.” And all for that, it came down to this—the body is what manifests itself, what makes a sounding board of our moods, our pains, our joys. It is therefore both physical and psychic.

This is what our ancestors of the Middle Ages understood. A person—is the capacity to say “I.” To be a person is to possess the sense of one’s individuality, “spiritual and body at the same time” (Marcel Mauss). “I am, I exist”, says Descartes. But the person was not waiting around for Descartes in order to exist. It is not precisely the Cartesian cogito. Descartes says: “I will now close my eyes, I will close my ears, I will turn away all my senses; I will even erase from my mind all images of corporeal things, or at least try, as this can hardly be done; I will consider them as vain and as false; and thus, speaking only to myself, and considering my interior, I will try to make myself, little by little. better known and more familiar to myself” (Meditations on First Philosophy, III). This is a bedtime story. A mental burp trying to be a philosophical “find.” It is the grail without the Arthurian poetry. Nobody serious can actually believe in this Cartesian man who would separate his self from the world. Who can possess an interior without exterior? The Middle Ages tell us something else. They tell us that the person is the center of a cluster of relations, and that these relations pre-exist the person. The person is what exists before the individual, who is an impoverished version of it. The individual is only a modern, rationalized derivation of the person. A step backwards towards the return to a body/soul dualism.

The idea of the person is this: it is not the “I” that builds his relationships. It is the relationships that build the “I.” A person is thus a fraction of a cluster of relations. A sequence in a relational flow; and for all that, it is not an arbitrary division. The person really exists. It is not a simple convenience of description. But a person only exists in relation to others. It is undoubtedly the meaning of the formula of Aragon: “One does not die, because there are the others.” In others, with whom we are and have been in relationship, there remains a little of us. All life is, as Aragon said, a “narrative carnival;” and a carnival is a community movement.

Putting an End to Guilt

In the end, it is Rabaut Saint-Étienne’s famous formula that triumphs: “History is not our code” (Considérations sur le Tiers-état). Poor Rabaut! His formula was intended to be nuanced, explaining that it is not enough for a law to be old for it to have value—but his formula was quickly interpreted as legitimizing the clean slate in the name of the “goddess of reason.” We see it nowadays—our code is the refusal of historical legacies, except in the form of repentance. In the latter case, forgetting about forgetting is the rule. Let us forget everything, except our “crimes.” A dolorous and incapacitating hypermnesia. Is this not the goal? Let’s be ashamed of slavery, of Vichy, of our nuclear power plants, and even of Fabien Roussel and François Ruffin, who are too attached to the defense of the way of life of the working classes! And let’s get rid of the “affluent society,” except for migratory abundance, which is non-negotiable.

The individual of the modern world is then hypertrophied, in a mixture of “all to the ego”—the “dictatorship of the ego” of which Mathias Roux speaks in his eponymous book—and of over-responsibility in the manner of Levinas (the latter taking up Dostoyevsky’s words: ” each of us is undoubtedly guilty on behalf of all and for all on earth, not only because of the common guilt of the world, but personally, each one of us, for all people and for each person on this earth”). Hypertrophy of the “responsible” self, which comes down to the following—to be responsible for everything is ultimately to be responsible for nothing. Who wants to embrace too much embraces nothing. “Man, being condemned to be free, carries the weight of the whole world on his shoulders,” said Sartre (Being and Nothingness). In the end, every man for himself triumphs, accompanied by great ideals too abstract to commit to anything. Some are in favor of welcoming “climate refugees,” who do not exist, but some will not make a detour to bring a bunch of leeks to one’s old invalid neighbor. “Contemporary narcissism would like to think of the individual as an autonomous entity that detaches itself from any belonging and wants to ignore the society in which it lives,” writes Marcel Gauchet.

In contrast to the modern individual, the Middle Ages saw the person as the product of relations between oneself and others, and the product of a shared horizon. The person, in this perspective, is never the beginning of a story. He is a moment in it. “All human life begins… in the middle of the action which has already begun”, notes Irène Théry (La distinction de sexe). It is with this continuistic conception of the person that modernity broke. It established a triple separation of which Jérôme Baschet gives an account—separation of man from nature and the living, of the body from the soul, of the person from what preceded him and what surrounds him. It is now necessary to stitch together what has been disjointed. The Middle Ages have things to tell us. Let us hear!

Pierre Le Vigan is an urban planner who has also has taught at the universities of Paris XI-Orsay, Paris XII-Créteil, and at the IUP Ville et Santé in Bobigny. He has also worked in adult education. This article appears through the courtesy of the revue Éléments.