The father of all perfection in the whole world is here.
Its force or power is entire if it be converted into earth.
~Newton’s translation of the Emerald Tablet

In 1924, the philosopher and mystic, Rudolf Steiner gave a series of lectures that advocated a radical method of farming, which he called, Biodynamic Agriculture, whereby the “cosmic forces” of the land would be harmonized for 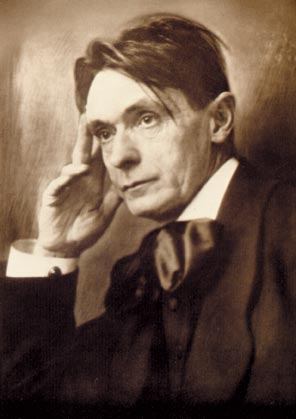 the best outcome in food production.

The alchemical processes that he advocates to enable this harmony of the farm with the cosmos are indeed very similar to the methods followed now by the entire organic farming industry.

Steiner sought to combine occultist, mystical, and scientific reasoning, which he hoped would formulate a system of practical knowledge, in which the farmer’s work on his fields would be the equivalent of a sixteenth-century alchemist’s investigation into the transmutation of lower substances into higher ones.

Thus, Steiner suggested that farmers view their land as a living organism, and thereby work to strengthen the cosmic forces in the earth and focus on nourishing the spiritual energies of the farm.

One such suggestion involved stuffing a bull’s horn with manure, herbs, and minerals depending on the time of the year. The horn was then to be buried in the field, where it would become a sort of “Horn of Plenty” and imbue the soil with energy, or nourishment for growing things.

Once the mystical frill is trimmed off, Steiner’s suggestion are not all that crazy. In fact, most of his suggestions easily transmute into principles of organic farming. How?

This is because soil is more than just dirt. Soil is a vast organic complex, an intricately linked ecosystem, very much like a forest, which is full of life, namely, microbes, most of which are extremely beneficial to crops.

These microbes in the soil help keep plants healthy by preventing disease, and they further aid the plant’s ability to absorb nutrients.

Thus, as Steiner advocated, organic farmers focus on soil health. They earn their “organic” label because they maintain (and ideally raise) the health of their soil.

In fact, Steiner conceptualized the necessity of natural practices in the 1920s, years before Lord Northbourne outlined organic farming in his book, Look to the Land.

The reason for this was that scientist made the classic rationalist mistake – they focused on the little things and forgot the big picture. Scientists saw large crops that they could quantify and measure by using artificial fertilizer. Thus they really had little conception of the harm they were doing to the soil. They focused on the rewards, which allowed them to ignore the risks.

On the other hand, Steiner was a mystic. Mystics and alchemists focus on the big picture. Steiner knew that the practices he advocated would strengthen the growing cycles of the soil. He didn’t know how, and he didn’t really know why. But in the end his method of agriculture proved to be more sustainable than the system created by the rationalists of his day. This is another example of how the narrow focus of scientific is ultimately harmful.

When Steiner says that the farm is an organism, a living thing, he is using another label to describe the same reality – that the soil is an interconnected ecosystem.

In order not disturb the soil, because it was a living thing, Steiner advised farmers to avoid tilling. By not tilling their fields, he said, farmers would preserve the microbes that were beneficial to plant growth. This practice of minimizing tillage and focusing on soil health is a cornerstone of organic farmers. The whole purpose of organic farming is to preserve the microbiome of the soil.

Steiner also recommended harmonizing the “cosmic” forces and cycles of the farm. For this reason, he advised farmers to feed their cows with crops grown on their own land, and then to use the manure of their own cows back on the land.

Cows eat plants, then plants eat up cow manure. This is one of the many cycles that occurs on the farm.

Steiner argued that the crops, cows, and farmers would benefit by strengthening this cycle. He wasn’t wrong. This tactic strengthens the microbes in the soil and is used by organic farmers today.

Ideas about cosmic forces in the soil sounds a bit loopy, but Steiner wasn’t far off. Microbes, such as, mycorrhizal fungi and node bacteria, engage in a mutualistic cycle within the plants that host them.

This is equal to the alchemical principle of like-to-like, or what is above, so below – in that all creation is intricately linked, and that we have to understand and manipulate these linkages. The macrocosm is governed by the same laws as the microcosm.

The belief in such linkages is central to organic farmers, who seek to strengthen the organic forces of the soil.

Steiner also believed in sympathetic magic, or magic governed by the two laws of similarity. First, that like produces like, so that effects resemble their cause. Second, that things which have acted on one another continue to do so after they have been separated.

Of course, these principles aren’t true in a proper mechanistic view of science. But microbiology does embody these principles to an extent. Microbes do reproduce, species for species, like for like. Moreover, microbes are contagious. If soil infected with a blight is put in a new field, it will contaminate that field with the blight.

Contemporary organic farmers will go out of their way to buy probiotics for their fields. This would make perfect sense to an alchemist like Steiner. He advocated the avoidance of artificial fertilizers.

Steiner’s theory that artificial fertilizer destroyed harmonic cycles in the soil wasn’t completely incorrect. One may find fault with his occult mysticism, but in many ways, he was ahead of his time.

Most importantly, Steiner saw farming in terms of the big picture. Human society was part of the agricultural equation. Quality mattered over quantity. This meant a focus on healthy crops, healthy cattle, and healthy people. After all, like produces like.

Indeed, biodynamic agriculture can hardly be said to be “behind” the pollution, ecological devastation, and agricultural imbalance that is the result of dumping artificial fertilizers on the land.

More importantly, Steiner’s focus on the soil turned the farmer’s attention to the natural forces and rhythms of the earth, which is the larger goal of organic farming today.

Thus, the idea that modern scientific agriculture (now dominated by organic farming practices which had an earlier advocate in Steiner) was developed independently of the arts is baseless. Science and the arts have always worked closely with each other for centuries. Remember that it wasn’t all long ago that scientists preferred to be called natural philosophers.