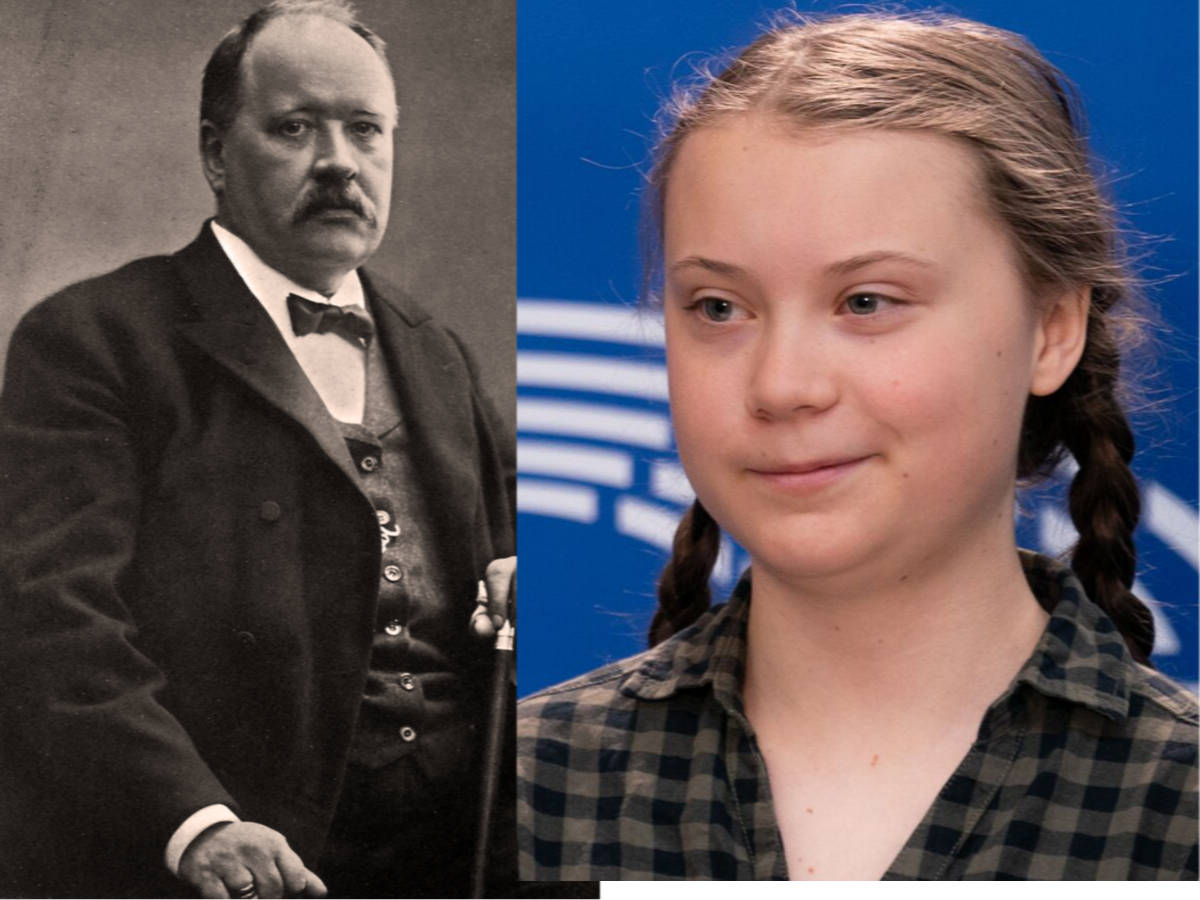 Is fame random? Or, is fame the result of access to power? The recent prominence of Greta Thunberg is a case in point. Did she become famous for simply being photographed sitting alone in front of the Swedish parliament building, on strike for the environment? Or, did she inherit the mantle of an eco-prophet? Is she just an ordinary, outraged young woman, or someone with deep family links to environmentalism, and who thus has all the right connections?

For those that might not know, Greta supposedly shot to fame when the aforesaid photo of hers was put on Twitter in 2018. The Twitter account belonged to a group called, We Don’t Have Time, a Swedish organization, funded by Al Gore. Therefore, the photo was a clever piece of propaganda, designed to “capture” the hearts of people all over the world – a “lonely little girl,” speaking truth to power.

Of course, using children to further environmentalism is an old tactic. Back in 1992, there was Severn Suzuki, who at age nine started ECO (Environmental Children’s Organization), and gave a speech at the UN, which was far more coherent that Greta’s performance. But Severn’s father is David Suzuki, Canada’s foremost environmentalist.

Cory Morningstar has very meticulously, and very brilliantly, analyzed the deep connections that Greta has to the many power-structures, all of which seek to change the world. This excellent research should be widely read.

But why Greta? Why her photo? The clue lies in what she really advocates – the Fourth Industrial Revolution, aka, the New Green Deal. This is, very simply, transhumanism, which is the creation of a bio-digital world, where technology merges with humanity.

But why Greta? Because she belongs, as it were, to global warming “royalty,” being directly related to that very Swedish scientist who, a little over a century ago, invented, and then popularized, the concepts of both global warming and man-made climate change. His name was Svante August Arrhenius (1859–1927), and his mother was a Thunberg.

Greta’s fame therefore is not accidental. She is continuing the project started by her illustrious ancestor – of course, enabled by her astute parents. Arrhenius’s name may not be familiar now, but in his time, he was well-known throughout Europe and North America.

People commonly assume that overwhelming data (inductive reasoning) led scientists to declare man-made climate change to be “settled science.” The problem with this assumption is that global warming and climate change are in fact hypotheses first invented by Arrhenius, and for which data (evidence) is continually being sought (deductive reasoning). It is hardly settled science, as recently shown.

Why do people back this hypothesis over any other? Because the majority of college graduates have a humanities or arts degrees, which skews how they perceive things scientific, for which they have little aptitude, let alone understanding. For example, innumeracy in the general population is very high. But these arts-degree-holders are also the electorate and their consent must therefore be continually manufactured.

Also, when it comes to sociopolitical matters, those with science degrees think the same way as their humanities counterparts, given that the entire purpose of higher education now is inculcation into radicalism. In the post-truth era, this means that those who research and teach science no longer believe that science is wedded to truth, as the recent humiliating defeat of the high-priest of global warming, Michael Mann, clearly showed, along with other studies, for example, here and here and here.

Science, like all other human activities, depends upon ideas, which are structures or models with which we understand, manipulate and benefit from the reality of the natural world. In other words, inductive reasoning was once the ideal of science.

But science, serving other masters than truth, now often aligns itself with social activism and social engineering (aka, power). Such cooption of science by the power-elite means that narrative (rhetoric) becomes far more important than truth – because rhetoric is the most effective tool to manufacture consent. Humanities degree holders are used to stories and they therefore respond well to rhetoric. And so goes the entire industry of environmentalism, where the “climate crisis” is continually narrativized for consumption.

Arrhenius took this early work and imagined that the amount of carbon dioxide (CO2), or “carbonic acid,” as he called it, in the atmosphere was directly responsible for warming the planet. He went on to suppose that if the amount of CO2 kept rising, then likewise the planet would keep getting hotter and hotter. This notion would become known as the “greenhouse effect.” And where would all this excess CO2 come from? Fossil fuels, of course.

He laid out this idea in a paper that was published in 1896 and entitled, “On the Influence of Carbonic Acid in the Air upon the Temperature of the Ground.”

This paper would become the bedrock of the contemporary climate-change industry, even though it was much criticized at the time of its publications (and later also) for its faulty science, such as that the effects of water vapor are mistaken for the effects of CO2.

Many of his contemporary scientists pointed out (as many scientists still do today) that CO2 cannot have any warming effect (or climate sensitivity) – which thus means that CO2 is not a “greenhouse gas.” Also, Arrhenius’s math was severely criticized by many, such as the physicist, Anders Ångström.

But it would appear that alarmism was something Arrhenius excelled at, for he next wrote an international bestseller, entitled, Worlds in the Making, in 1908, in which he explained to the layman his “hot-house” theory, where the continuous burning of fossil fuels, by industry, would increase the earth’s temperature. Thus, he linked his dubious science to modern human life – the ideal formula for alarmism.

The logic followed in his book is obvious – control human activity and you will control the earth’s temperature. For this reason, Arrhenius is rightly called the “father” of global warming. He is also the “father” of the entire energy crisis industry, since he was the first to suggest that oil reserves were finite (aka, peak oil) and coal would run out.

Any alarmism worth its salt has an end-game (massive social change) and so must also offer solutions that will bring about this desired result. Accordingly, Arrhenius suggested that the use of oil and coal be limited, if not eliminated; that electricity replace oil as an energy source; that fuel efficiency be practiced; that bio-fuels be used; that atomic energy be developed. Arrhenius, in fact, gave modern environmentalism all of its talking points.

But how did his ideas become foundational to environmentalism today? Arrhenius was largely ignored until 1979, when the Charney Report, entitled, “Carbon Dioxide and Climate: A Scientific Assessment” was published. It relied heavily on Arrhenius and thus gave him instant legitimacy.

Then, in 1990, the IPCC used the Charney Report as the basis for its own report, which turned Arrhenius’s hypotheses of man-made climate change and global warming into “settled science.” Henceforth, climate could only and “correctly” be viewed through the lens of Arrhenius. Those who refused or objected would be labeled as “deniers” – i.e., heretics.

Another “settled science” in which Arrhenius made much contribution was eugenics. Just as animals and planets could be bred to show particular characteristics, so too, it was believed, could humans be made better by selective breeding (which was known as racial hygiene). Thus, human reproduction was to be controlled and limited by the state, all bulwarked and justified by science. The mantra of “listen to the science” that is oft-repeated by environmentalists in itself has a very sinister history, for eugenics was nothing but “settled science” for people like Arrhenius, Margaret Sanger and Hitler.

The obvious question that arises is a simple one, then – does Arrhenius’s work on global warming stem from his eugenics? For example, in 1912, he famously concocted an experiment in which public school children were electrified, in order to make them grow taller. Apparently, it was said to have worked. Thus, where does climate science stop and eugenics being for Arrhenius? It is a question not yet settled.

Further, Arrhenius was the founding member of the Swedish Society of Racial Hygiene, which was established on 1909, as well as the State Institute for Racial Biology, in 1922. Both institutes justified Sweden’s sterilization of non-Aryans, and other “undesirables,” long before the Nazis. And these institutes set the context for the forced sterilization of over 60,000 Swedish women, who were deemed unfit to breed. This practice continued until 1975. Sweden was hardly a socialist paradise for these unfortunates. As well, Arrhenius worked with Gustaf Retzius, who used phrenology (developed by his father, Anders Retzius) to further claims of Nordic racial superiority.

And, in 1900, Arrhenius was the founding member of the Nobel Institute and its Nobel Prize and headed both the Nobel Committees on physics and chemistry. Needless to say, he made sure that most of his friends received the Nobel (such as, Theodore William Richards and Wilhelm Oswald). Three years later, he himself became the first Swede to receive the prize.

Thus, Greta’s own nomination for the Nobel is part-and-parcel of being a member of the global warming “royalty.” It is interesting to note that her father, who is an actor, writer and producer, is named Svante; and her mother (Malena Ernman) is a well-known operatic singer, who has also co-authored, with her husband, the bestselling book about her family and their environmentalism, entitled, Scenes from the Heart (2018).

Like her mother, Greta recently published her own book, No One is Too Small to Make a Difference, which is a collection of her eco-activist speeches. And it does not come as a surprise that she herself has her biography on the Internet Movie Database, given her parents’ careers. But her recent stumble does give one pause as to her spontaneity.

As for Greta’s access to power? She is backed by the World Economic Forum, the Bill and Melinda Gates Foundation, the Rockefeller Institute, the Prince of Wales’ Corporate Leaders Group, the World Business Council for Sustainable Development, and more than twenty NGOs – and they all want to bring about the Fourth Industrial Revolution. She is hardly a “lonely little girl” heroically fighting the powers that be. Rather, she is famous because she is an effective ambassador of these powers, and because she belongs to the right family.

Greta means serious business. Wittingly or unwittingly, she is the child-herald of a nightmare future, inhabited by a mechanized humanity, wherein that century-old experiment, conducted by her relative, of electrifying children, will be upgraded for all humanity. Saving the planet means eugenics, for it is ultimately Malthusian in its logic, in that people are the enemies of the planet and their numbers need to be controlled. Greta’s alarmist environmentalism is impossible to accomplish without eugenics. But then global warming and man-made climate change are both the invention of her ancestor who understood such eco-eugenics well.