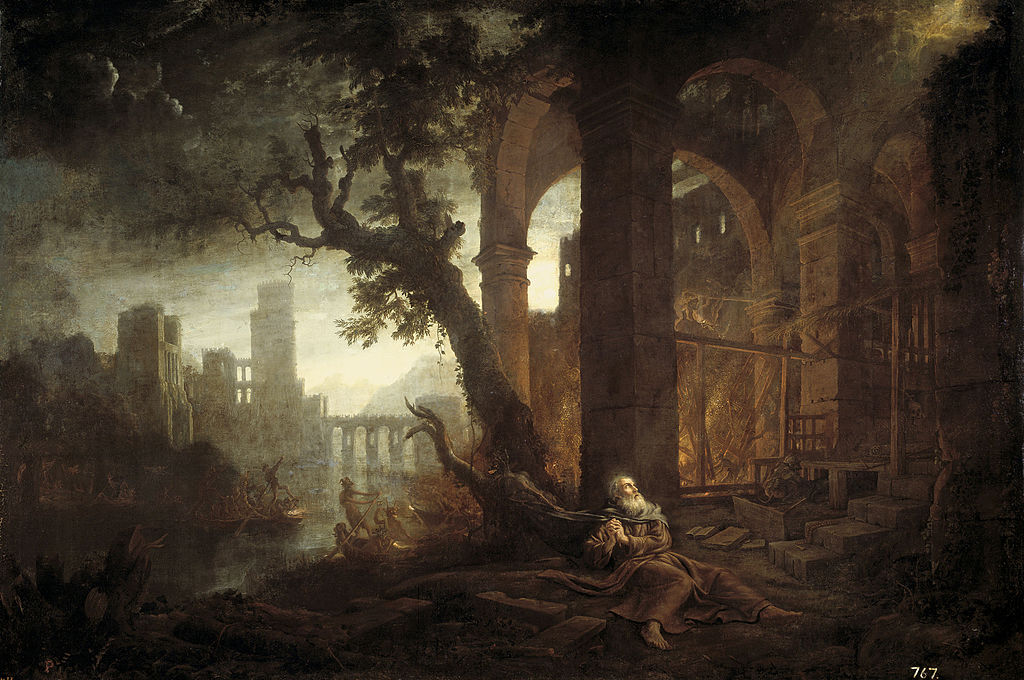 After the middle of the 4th century AD, Christianity became the state religion of the Roman Empire. The era of radical martyrs was setting and the age of the hermits began to dawn.

Hermit after hermit fled into the wilderness of dessert in the effort to escape from the world. But a great irony began to emerge, as people fled from the world, the more the world followed them.

Believing that these holy men attained a special wisdom and spiritual nature from their isolation, many wandered into the desert to seek their guidance.

One of these seekers was wise enough to write down the messages the hermits shared and amalgamate them into a single book known as The Sayings of the Desert Fathers.

The book is full of lessons, but there is a meta-lesson to be learned here.

When you pull away from the world, the world tries to pull back, but if you stay steady then you can pull in the world.

The hermit resists being swept away by the flooding world through his mountainside retreat. There, he meditates on the nature of the world below and the future to come.

There is only one world, but it is riddled with tensions. There is a tension between yourself and the people around you. Just like there are tensions within yourself, but still you remain one.

I use the word “tension” and not “division” because nothing is truly divided. Rather, all things are sown together through their interactions which unify them into a single being.

The hermit pulls on these tensions. By running off into the wilderness, he drags society with him. The wilderness is a dangerous place to be, but is only there where transformation can occur.

Surely the world will send a messenger to knock on his monastic gates, but whom shall it be?

Will the serene solace of the acetic be torn asunder by trumpeting fiends, the very devils he once sought to surpass? Or will the cold despair of his heart be warmed with the fulfillment of his greatest hope?

What is the hope of the man on the mountain? Is it not the arrival of another who has fled as he himself had one fled, a champion who has come to fulfill the prophecy set by his own dreams?

This is the story of the first Christian hermit, St. Paul of Thebes, who fled to the desert in the face of his persecution as boy.

For almost a hundred years, Paul found refuge in a cave with God and a raven to keep him company. After making a robe from palm leaves he trained the raven to delver him bread.

The aching solitude of the hermit was interrupted by St. Anthony, who saw the hermit in dream. Driven on by his vision, he walked the earth till he came across the lonesome soul.

In joy, the two broke bread and conversed night away. But on his second visit, Anthony found the cloistered saint dead. In homage to St. Paul, Anthony took on his palm-leaf-woven robe.

St. Anthony would go forth to spread the ways of monasticism and later be known as the Father of All Monks, foremost of the desert fathers.

The monastic tradition became the backbone of Christianity. The escape of the world’s clutches, and the journey inward, became a milestone in Christian thought.

When you stop playing societies game, you give yourself the chance to start anew and play your own game. God only hopes that you will find others who will come forth play with you.

The point is not to go live in the woods, or start making a robe out of palm leaves. Rather, withdraw into the mountain of your own mind, carve away at your own space, and bear the weight of your retreat even if at first you find yourself alone.

It has nothing to do with  getting out of the city. After all, can you think of anything more lonely than being around millions of people you don’t know?

Is not the martyr, like the hermit, unshackled from society? Is not the tension between themselves and the world as tight as the noose around their neck? They have withdrawn from society’s mire in pursuit of the pure and incorruptible.

They both share the vision and likeness of the prophet. The role of the prophet is to carve out a mental and linguistic space where the shadows of idle fantasies are torn apart by the light.

If the prophet is skilled at his art, then he will be hated because the surgery of Man’s mind is done without anesthetics.

But when the hermit, the marytr, and the prophet pull into themselves and away from the world, they drag the collapsing world behind them.

This is the strength of the hermit. He is the oasis in the land of devastation. His virtue lies in his resisting of himself, which lays waste to the world.