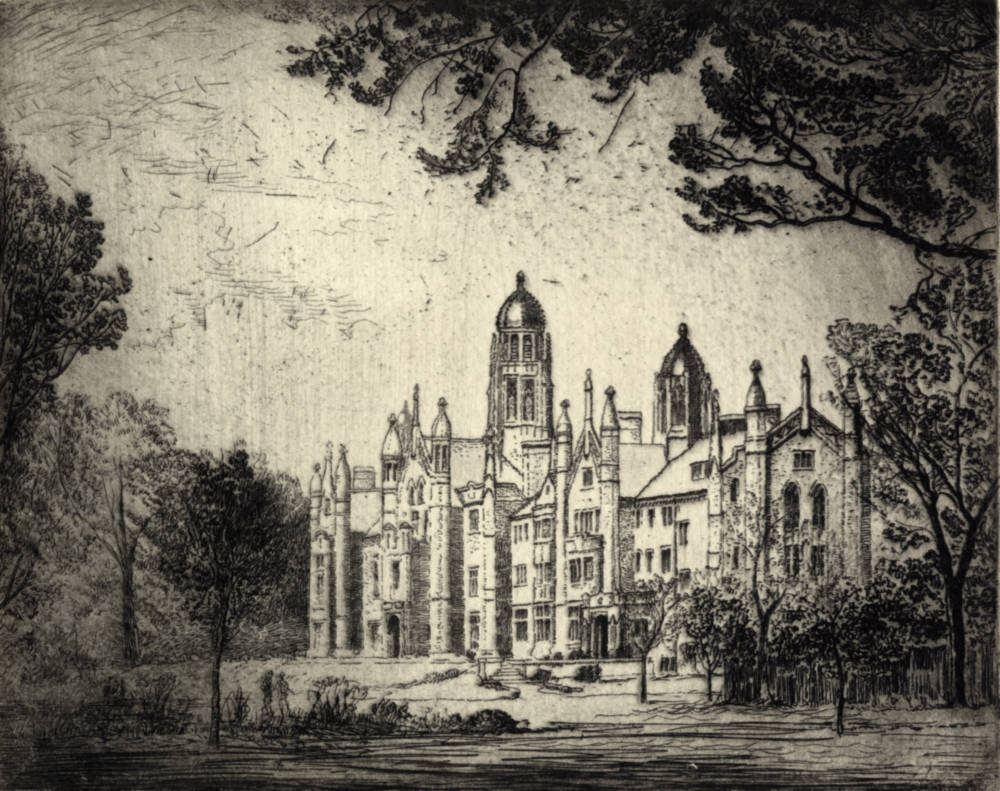 There is nothing novel about the gravamens of “anti-Black racism” that Mayo Moran, the Provost of Trinity College at the University of Toronto, has been laying down over the last half year. Indeed, it is rather disappointing how pedestrian her pronouncements have been. When Canadian university faculty and administrators were swept up in the Great George Floyd Moral Panic of 2020 in May and June, Moran like others declared that she had suddenly discovered wide-ranging racism plaguing Trinity and announced plans for complete therapy.

As elsewhere, Moran is now taking this movement in its logical direction of abandoning deliberation and procedure in favor of revolutionary action. In November 2020, she promised that the “recommendations” due to be made by an “anti-racism task force” by the end of the year would be treated not so much as recommendations as commandments: “Our goal is to begin implementation as soon as possible.”

The idea that there is a crisis of “anti-Black racism” at Trinity, or elsewhere on Canadian college campuses, is absurd, and everyone knows it. Alongside First Nations students, black students are the most coddled and privileged members of the campus community. When three black Trinity students of the college’s Multicultural Society wrote in the university newspaper this summer about the intolerable suffering of “anti-Black racism rampant in the dining hall, the quad, and on the front steps” of the college, the most they could come up in specifics was that they had “heard of” some black students being treated rudely during orientation.

When I went to Trinity, being treated rudely during orientation was one of the purposes of the exercise, creating solidarity with one’s fellow classmen and good-natured connections to upper classmen. The three black students would have Trinity redesign its orientation with special rules for the treatment of black freshmen, surely an ironical aim for a group devoted to “inclusion.”

The other charge of pervasive anti-black racism the students made was that Trinity student groups – which include the Trivia Association, the James Bond Society, and the Garlic Bread Society – had not issued pro-Black Lives Matter statements during the summer. These non-compliant student groups, they charged, were “rooted in hate and further the exclusion of Black students at Trinity.” From what I can tell, their Multicultural Society did not issue a letter of condolence on the death of Sean Connery in deference to the feelings of the James Bond Society either. Shocking.

The totalitarian face of any political movement is never so clear as when it demands complete deference to its agenda from others in a pluralistic world. Like Provost Moran, these three students believe that the purpose of a university or college is to take a position on controversial social issues of the day and then rigorously enforce conformity among all students – sort of like the Marxist doctrines that animated the BLM movement in the first place.

In good Leninist form, the students also warned darkly that “people are choosing to protect their own images rather than acknowledging their faults” without naming anyone in particular. Perhaps sensing the threat, the college’s three main student leaders stepped down and apologized for their skin color: “As white and privileged leaders, we are the very people who have benefited from these institutions. We wholeheartedly believe that these structures need to be taken down.” This was the only blatantly racist episode that Trinity experienced over the summer, but of course it was the sort of performative virtue-signalling that progressive administrators like Moran look upon with loving kindness.

To charges of rampant racism, student radicals at the college later added rampant misogyny and “classism” (to be distinguished from classicism which these students may not have heard about in their years of thought reform at Trinity). This new Holy Trinity – race, class, and gender – has now replaced the older one that sought God’s truth.

Following the cue of the “white and privileged” students to “take down” the 170-year old college, Provost Moran and her “task force” are running headlong into a transformation of Trinity from a place of education into something truly sinister. There is already a student-led “Trinity Anti-Racism Collective” formed this year, and if its writ is as large as the Provost’s actions suggest, the college might simply rename itself accordingly as part of its Woke rebranding.

Such a renaming would at least help the shrinking number of intellectually curious high school students – as opposed to those adept at the virtue-signaling, performative moralizing, and careerist box-checking – to begin seeking out alternative places for a serious education. The list of elite colleges in the U.S. that have suffered this fate is a long one and Trinity may soon join them. Along with the disappearance of top students will go a disappearance of the “excruciating whiteness” that the organizers of the Trinity Multicultural Society insisted forced them to mobilize in 2018. During the current academic year, just 2 of Trinity’s 10 student leaders are white. Surely there will be no more excruciating whiteness once the whites have been sent packing. This is of course a problem from Trinity because there is wide evidence that top-performing high school students will avoid ethnic ghettos where the majority group has been ethnically cleansed since those places will not help them to thrive in mainstream society or to form valuable social connections.

So why care about this predictable response from Provost Moran and her anti-racist task force, any more than we care about similar developments elsewhere on Canadian college campuses? Isn’t this just the way the campus has gone, and the evidence that Canadians interested in freedom of thought and speech and a vigorous contest of ideas in the search for truth should no longer expect to find it in taxpayer funded universities and colleges?

One is that Trinity, like some other legacy institutions of education in Canada, holds a special place because of its deep lineage in the Canadian tradition. What happens there is more emblematic of a core shift than, say, similar developments at a newer or more experimental institution, or for that matter at Provost Moran’s alma mater, the UBC English Department whose June Statement of Solidarity Against Anti-Black violence promised with illiberal ferocity to eliminate “scholarship that still valourizes whiteness and settler-colonial ideas of European civilization.” We don’t expect much of the UBC English Department, which regularly suspends classes so that its students can rush to the barricades to support the latest social justice cause. But if excellence and academic freedom and merit cannot survive at Trinity, they will not survive anywhere in Canada.

More practically, there are substantial intellectual lineages of which Trinity is the steward that risk annihilation by Provost Moran’s new fanaticism. Over the summer, the college’s library was “re-evaluated and reshaped” according to an official notice, to downplay its main holdings in Canadian history and literature and emphasize the new party doctrine which the Provost helpfully enumerated as “anti-racism, anti-oppression and equity.” Surely it does not take a history degree to feel alarmed when political movements show up at the library spoiling for a fight with the stacks. Book burnings in the Quad anyone?

In particular, the Trinity library is steward of the Upjohn-Waldie Collection, which is no mere trifle in Canadian heritage. The collection includes rare books from late medieval Europe such as a 1473 book on the education of princes and a psalter of the same year. Priceless manuscripts from the early Renaissance include two first edition publications by Martin Luther and printed in 1520 and 1531, and a 1623 printing of Shakespeare’s Timon of Athens. The collection harbors one of the best holdings of early exploration accounts of Canada, such as a 1728 printing of John Gatonbe’s A Voyage into the North-West Passage Undertaken Anno 1612, and Alexander Mackenzie’s 1801 Voyages from Montreal on the River St. Laurence Through the Continent of North America to the Frozen and Pacific Oceans. There is a 1787 Book of Common Prayer in Mohawk, a critical early resource documenting that language, and a first edition of Joseph Conrad’s 1942 collection of nautical stories, The Tremolino.

I dwell on these precious holdings because libraries and collections are not inert, but rise or fall depending on how they are stewarded and celebrated. The Trinity library staff spent their entire summer “reevaluating” to promote the latest Woke Studies novels, as well as reading and promoting hate-filled screeds by black American racialists. Trinity’s precious holdings, especially that Mohawk prayer book, may soon be charged with “valourizing whiteness and settler-colonial ideas of European civilization.” The iconoclastic destruction of Trinity’s Upjohn-Waldie Collection, by indifference and erasure even if the books survive in some forgotten vault, seems only a Provostial missive away from “immediate implementation.”

Of course, the world will not fall because Trinity (or McGill, or Queen’s, or Dalhousie) falls. But the wave of illiberalism that Provost Moran is leading is an important signpost in this larger trend. As goes Trinity, we might say, so goes Canada. “After the Struggle, the Crown”, reads the college moto from 1851. Queen Moran is now hastening to the throne after her struggles against phantom racism at Trinity. I prefer an older college motto, that of the Trinity Literary Society that came into being in the 1840s, and has recently become a focal point for the Trinity revolutionaries that Moran has unleashed: Feros Cultus Voce Formare. “To tame wild manners by power of the voice.” Canadians as a whole need to tame the wild manners of campus barbarians with the voices of their strong opposition.

A native of Calgary and a graduate of Trinity College, Bruce Gilley is professor of political science at Portland State University.

The image shows an etching of Trinity College by Owen Staples, c. 1930.