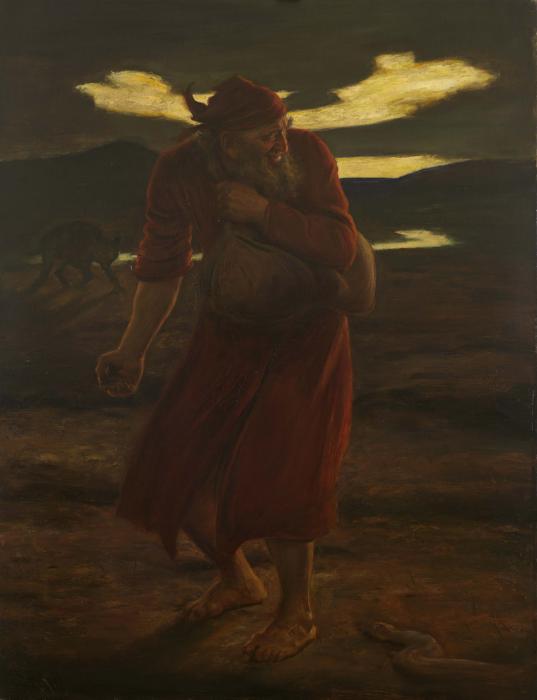 The TV programme Fake Britain is usually on in the morning. It’s quite interesting to watch. The Programme is about criminals in Britain who sell things to people like you and me, that are not real; they are fake.

It used to be that police would have raided Sunday markets like the one at Nutt’s Corner in Belfast years ago, where dodgy traders were selling off videos and cigarettes that were fake. Generally, those were the two main items.

Today There is hardly any household item that cannot be replicated as a fake. Even the new £5 notes have had to have special holograms printed on them; something the criminals have not mastered …..…yet. But they will.  Everything from Christmas tree lights, to perfume, to watches, trainers, even food can be sold as counterfeit.

Everything it seems can be a fake. Including religion. With regard to religion It’s not just fake; its counterfeit. Its looks identical; the same as the real thing. In other words, there is hardly anything on the surface that separates the counterfeit from the real thing. They both look identical.

There are 8 parables in this chapter of Matthew and the first two have to do with soils and crops and growing.

All of them though, have to do with the Kingdom of God. Jesus speaks about the Good things concerning the kingdom as well as the Bad things.

Jesus was a country boy and he liked telling parables about what he saw going on in the countryside and the natural world.

Growing crops like wheat in bible times and today is something vitally important for us; but so is the meaning of the parable.

We need to understand that when the farmer sows the field with wheat, almost immediately weeds start to grow up alongside the tender shoots. These weeds are called Darnel. This weed called Darnel and immature wheat look very alike in the early stages of growth. In fact, you cannot tell them apart.

The one who sows the GOOD seed is Jesus. The field is the world. The GOOD seeds are Jesus’ true followers, the true Christians.

The weeds or the Tares are the sons of the devil. And the one who sows the weed, the enemy, is the devil. It’s not God. God does Not sow the Weeds. He sows the Good Seeds. Then comes the harvest, and the harvesters are the angels.

It’s a straight forward parable but there are a few puzzlingly things that emerge from it.

Number 1. The Devil has a family; and His family are made up of counterfeits.

In other words, they are imitators of the true faith. The first imitator of faith was Cain the son of Adam and Eve. In the book of Genesis, we are told He had a brother called Abel and both men were religious.  What did Cain do? He killed his own brother because he was jealous of his brother’s relationship with God.

Then when God asked Cain, where is your brother? Cain lied by saying,’ I don’t know, am I my brother’s keeper. Cain was a member of the devil’s family.

If you go on and read about some of the kings of Judah and Israel you will find they are also family members. The devil has sadly, a very large family.

In the New Testament which gets much closer to the truth; who are the next group of people we discover who belong to the devil’s family? Any ideas?

It’s……. the Pharisees and Scribes. Now you may think they are just misguided but well-intentioned people. Not according to Jesus.

Jesus susses them out right away. He knows where they stand in relation to him; and who they stand with.

The Pharisee and scribes were the ruling religious leaders and had been around for hundreds of years. What did they think of Jesus??

Well After Jesus healed a demon possessed man, they said; ‘it is only by the devil, the prince of demons that this fellow drives out demons. Its only through the devil he does this.

Jesus knew where the Pharisees stood; he called them a brood of vipers several times. Vipers are poisonous snakes and can be very deadly.

After a relentless war of words, the Pharisees had waged against Jesus throughout his ministry Jesus says this about them. Reading from Matthew 23.

‘Woe to you, teachers of the law and Pharisees, you hypocrites. You travel over land and sea to win a single convert and when he becomes one, you make him twice as much a son of hell as you are.’

Pretty strong stuff. Jesus does not mince his words. It’s as well the NI Equality Commission wasn’t there to hear Jesus speak.

Jesus goes on; ‘You appear to people as righteous but, on the inside, you are full of hypocrisy and wickedness.’

Now this is important to note; NOWHERE does Jesus ever say that if you are Not a child of God, then you are a child of the devil. He never says that. The only people he says that about are……….. the religious leaders; the Pharisees.

Jesus knows where each person stands with him. These people are members of Satan’s family and they do his bidding for him. The devil comes to us the bible says; as an angel of light, always hiding his true intentions.

You see The Pharisees appeared to others as very religious people, who prayed, tithed, carried the scriptures around with them. They looked the real deal. The rabbi’s still do to this day.

That’s the first point. The Devil is real; he exists and he has a religious family. You can see why this parable isn’t preached on very often.

The Second point is this; The Earth is the Lord’s and everything in it.  It belongs to God; NOT the devil. The forests are his, as well as the cattle on a thousand hills. The Field in this parable is the world.

Jesus is dealing with a specific truth; namely and this is what this parable is all about; That wherever God plants a true child of God, the devil comes along and plants a counterfeit, who looks like the real deal. It’s a fact.

The devil is a neighbour; whether we like that or not. He lives beside us. He is in our neighbourhood.

Jesus is the sower AND owner of the field. The earth belongs to God and the devil is a trespasser. It is NOT his world.

Many times, and with the news we hear daily we think it is. But it will never be the devil’s world and the devil knows this. And so He causes dissension, strife, wars, and rumours of wars, chaos, AND plants counterfeits. That is his MO. His Modus Operandi.

The servants wake up one day to find, weeds growing in the field alongside the good seed. Immediately they ask; ‘Where did the weeds come from.’ ‘An enemy did this’, replies Jesus.

The natural response is; the servants ask him; do you want us to go and pull them up?

Jesus says NO; ‘because while you are pulling the weeds up, you may root up the wheat with them. Let both grow together until the harvest’.

Surely you pull the weeds up right away; pull up these counterfeits, these distorters of the truth. You Get rid of them. Don’t you.

The fact is; Jesus is NOT worried about the weeds.

God is in control of the world. Remember the earth is the Lords. We get anxious about who will be the next prime minister, Brexit, the EU, our pension, our savings, our children, our parents, selling our home. Moving jobs.

There will be a harvest; and it IS going to come at the end of the age. God will tell the angels Not us, to gather up the weeds, tie them in bundles and burn them.

Then HE will gather the wheat and it shall be brought into his barn. Two very different outcomes. Very Similar to how he treats the sheep and the goats later on in the book of Matthew. The sheep on his right, and the goats to his left.

The people and nations in this world are living on Substitutes. You can buy sleep and drugs, but not PEACE; you can buy entertainment but not JOY; you can buy companionship but not LOVE.

The three things the bible says are essential for living and having a good life; are Peace, Joy and Love. If you have those 3 within you; you are blessed.

People all around us are living on substitutes. They need to eat the food from God’s harvest. Instead they are eating steadily, even gorging themselves on substitutes, on counterfeits fed to them by the devil. He has blinded them to their folly.

This world for the Christian is not a playground; it’s a battle ground where we encounter all around us demonic led forces who persist in trying to deceive us and destroy us. But take heart; Jesus says; ‘I have Overcome the world’.

Jesus is Not subject to the world; nor should his followers.

Oh, it would be great if Jesus would pull up all the weeds right now and burn them. NO; he says; but one day I will. Just Leave that to me. That’s my job.

Here’s a question for you. Why do you think he’s NOT doing it now? Why is he waiting and waiting? The time is Not right. But also…….

It’s because we have a job to do LIVING and Working among the weeds, among the tares. We have work to do for the Kingdom of God. That’s why God dosn’t pull us up and send us directly to heaven. We are to be active in the things that matter to God and not apathetic or indifferent as we live our lives. We are to be on the ball and not sleep walk into the devil’s schemes.

In his love and through his mercy he gives the weeds time to repent and believe. Some may do it; some will not. But it shows us that even with counterfeits God in his grace grants them a chance to turn from their wicked ways right up to the harvest.

God plants Christians where he wants to. He scatters them to grow for a reason or a season. You are planted where you are; in a family, in a job, in a neighbourhood, in a farm, in a church, in a village, for a reason. To live a life worthy of God. To live a God honouring life.

To grow strong and firm in faith where many around you are living on substitutes. Our lives are to be lived out differently and distinctly to those around us.

This at times can be very hard going especially when we face obstacles and setbacks along the way. Which we will. Even in our own families, as Jesus did.

Sometimes we feel like throwing the towel in. But we keep on going. We keep living among the weeds. Remember; The one who is in us; is Greater than he, who is in the world.


Rev. Alan Wilson is a Presbyterian Minister in Northern Ireland, where he serves a large congregation, supported by his wife. Before he took up the call to serve Christ, he was in the Royal Ulster Constabulary for 30-years. He has two children and two grandchildren and enjoys soccer, gardening, zoology, politics and reading. He voted for Brexit in the hope that the stranglehold of Brussels might finally be broken. He welcomes any that might wish to correspond with him through the Contact Page of The Postil.

The photo shows, “The Parable of the Wheat and the Tares” by John Everett Millais, painted in 1865.