As I so often complain, the quality of modern discourse is atrocious.  Probably this is due to everyone being told for decades that his opinion always matters, along with a belief that democracy means all opinions are equally valid regardless of reasoning, capped off by modern avenues of communication that allow easy, free broadcasting of stupidity, when in the past dumb people had very limited ability to force the rest of us listen. 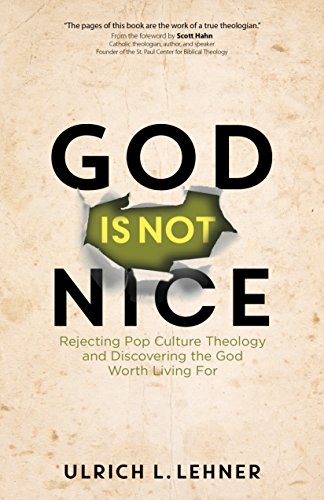 Worthless discourse exists across the political spectrum, of course, although that the Left dominates  popular media means the average person probably has to suffer more from being bathed in drivel from that side of the spectrum.

Lehner’s point is that the usual modern American view of God, that he is “nice” in the same way as an avuncular grandfather, is a pernicious innovation.  God is not here to make us feel good, nor is he here to dispense treats if we ask in the correct way.  Rather, he has created us to make us, Lehner says, “partakers of the divine nature.”

In short chapters, Lehner outlines certain characteristics of what Christians believe that divine nature to be:  one of thunder, terror, surrender, intimacy, consolation, incarnation, rebirth, and adventure.  The author, a professor at Marquette, begins by talking about what his students usually believe about God—namely, they have uninformed, sentimentalist, egocentric thoughts about God, when they have any concrete thoughts at all.

Most of all, they deny, implicitly or explicitly, both that there are truths to be had, that those truths exclude contradictory falsehoods, and that those truths are difficult, especially in the demands they necessarily make of us. Lehner then briefly covers older (though better thought-out) tendencies similar in content, such as, Pelagianism and deism, all as background to explaining the real Christian view of God.

Each subsequent chapter is short and to the point, and written to a general audience, not to theologians. When Lehner says God is a God of thunder, he means that the simpering emotivism that characterizes most discussion about God not only fails to capture, but is antithetical to, God’s real nature.

Such emotivism is also used to undermine religious discourse, with facile phrases about “forgiveness and love” being used as the sole rationale for the claim that God does not require anything substantive of us, and also for the necessarily related defensive claim that anyone who says otherwise hates both forgiveness and love, each more than the other.

But, “As a theologian, I ask why God is love and what forgiveness entails and whether it can be bestowed on someone who does not ask for forgiveness. I look for reasons, not opinions.”  We are to search for objective moral standards, not, as is the usual pattern today, to claim that they do not exist, because love.  (As the atrocious slogan goes that is used to justify whatever dubious activity wants justification today, “Love is love is love is love”).

If we fail to appreciate that God demands certain things from us, we end up with the usual modern situation, where “The God of Abraham, Isaac, has become the god of Walmart,” a pleasant greeter saying hello and helping you to find what you want, not what he wants.

It’s not just demands, though—God is actually a God of terror, not in the sense of panicked fear, but of awe, “trembling and enchanting.”  Here, Lehner takes on the task of reconciling the Old and New Testaments, a challenge early taken up by Christian theologians, responding to attacks by pagans centered on the apparent contradictions in the description of God’s nature between the two Testaments.

He outlines (it can’t be more than that in a short chapter) the standard response, that apparently un-Christian actions and directives of God in the Old Testament are to be understood allegorically.  To his credit, he leads with one of the most difficult passages, Psalm 137, verse 9, “Happy shall he be, that taketh and dasheth thy little ones against the stones.”  In that verse, “thy” refers to the Edomites (Lehner says it refers to the Amalekites, but that is wrong).

As Lehner says, “the [Church] Fathers interpreted such passages as metaphorical and thus made them consistent with their belief system.  The babes were not innocent humans but an image of the evil offspring we produce—our sins—and the stone against which they should be smashed was the ‘rock’ whom the master builders had rejected, Jesus Christ.”

In the Enlightenment, such allegorical readings were rejected as irrational and unsupportable, leading Christians to increasingly wholly reject the strict and demanding moral requirements of the Old Testament as embarrassing (and to reject the miracles of the New Testament, including the Resurrection, as well).

Lehner thinks we should restore those allegorical readings (which have never actually been abandoned), and understand that the writers of the Old Testament tried to communicate the “awe-inspiring experience of the divine” with the “nearest analogy they had at hand—the ‘irrational,’ unpredictable, unreasonable, odd behavior of fellow humans!”

Next Lehner covers the utter surrender God demands; he liberates us because he loves us, but that implies nothing less than a total commitment in response.  What this should do for us is make us understand that sin is not a stain we can simply brush off, but a rupture with God, that needs substantive repair.

And God’s liberation of us also implies a total commitment to loving our neighbor, a “thou,” not the general category of neighbors (as is common in these days of virtue signaling and substitution of political activity for concrete actions toward concrete people).

Love does not mean absolving yourself or others of guilt, though—quite the opposite.  Finally, Lehner covers the intimacy, the self-exposure, being open to God requires; the question of the consolations offered in this life by God; incarnation and rebirth (in which he treats original sin, freedom and redemption); and the adventurous, enchanting nature of God, who offers us an adventure as well.

As far as the consolation of God; Lehner touches on theodicy, but he does not touch on the most common “Nice God” response to that problem, which is to recite in a talismanic fashion, “I believe everything happens for a reason,” by which is meant that God has a hidden purpose behind the most hideous events, which will be revealed to us in the fullness of time.

I have been blessed with, so far, no immediate tragedy in my life, so perhaps this is easy for me to say, but as David Bentley Hart has pointed out, what God promises us is not the unveiling of such a grand synthesis, but the wiping away of tears, and the remaking of all things:  “Behold, I make all things new.”

Lehner does point out that part of Christian theology is the ultimate revelation of the downstream effects of our sins, but that is, if you think about it, the opposite of showing how those sins were part of God’s plan.

Related to theodicy is Lehner’s criticism of the modern tendency to see health as the highest good.  This is also a product of the Enlightenment—I am currently reading Paul Rahe’s New Modes and Orders in Early Modern Political Thought, which exhaustively catalogues the philosophical turn to human comfort as the highest good during the Enlightenment (something Rahe appears to endorses, as a Straussian, but I will discuss that in my review of that book, not this one).

Of course, those who worship a (factually inaccurate) picture of the Enlightenment, like Steven Pinker, also agree that this change to the effective worship of health is an improvement, which it is—if, and only if, God is merely, or at all, nice.

I want good health for myself and my family, and for everyone, as much as the next person.  I am greatly blessed in that regard, but I will not always be, and Lehner informs us it is not the highest good.  In fact, we should not be heard to complain when God fails to deliver us perfect health, or even good health.

In an interview about this book, Lehner tellingly cites, from Luke 17, the story of the ten lepers that Jesus healed, only one of whom returned to thank him.  It’s that view of God that Lehner realizes is a timeless temptation, because it’s easy.  You might call that version of Christ “turnkey Jesus.”

God Is Not Nice is only a gateway to thinking about this problem; the book touches on many of the most tangled and troubled theological issues of Christianity, which it cannot possibly cover in detail, and therefore I think its main value is in exposing to the interested reader the basic concepts of Christianity that are alien to the beliefs of most Christians today.

They won’t know all the details after reading this book, but at least they’ll have good reason to question the unexamined beliefs they hold, and to explore further.

Charles is a business owner and operator, in manufacturing, and a recovering big firm M&A lawyer. He runs the blog, The Worthy House.

The photo shows. “Noah On The Eve of the Deluge, painted by John Linnell in 1848.