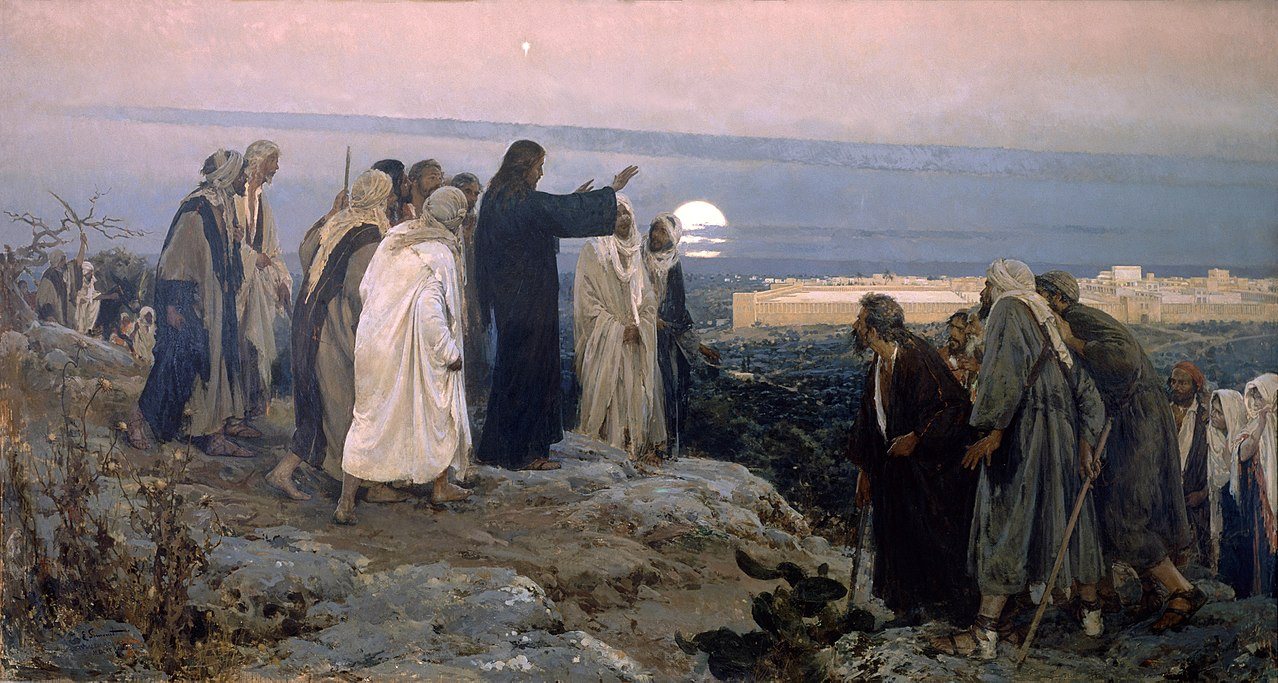 We live in a culture that is eager for religious experience without being too Christian.

In the United States of America over 80 per cent of the population believes in a God or gods that have power over the universe. When asked further; if all the worlds religions essentially prayed to the same God, 65 per cent of the adult public agreed.

Within the pews of American churches, two thirds of the people do not believe in the exclusive character of the Christian message, and almost half of all evangelicals say the same.

In light of these findings both inside and outside the church, who or what is our faith based on?

At the centre and core of our faith is the entrance of Jesus Christ into world history as the complete revelation of God. This is an event which happened in the town of Bethlehem over 2000 years ago.

It is an event that cannot be thrown away. It cannot be redefined as a myth or compared with the religious revelations offered by others such as Mohammed or Joseph Smith.

Throughout the world Christians are often tempted to forge new alliances in order to achieve noble ends. This is particularly true in countries where multiple faiths coexist side by side.

In the hills of the West Bank in Israel moderate Palestinian Muslims and Palestinian Christians have services in close proximity to one another and wonder what sort of unity they might build in order to construct a unified front for justice.

The same questions arise here in the West. There is difficulty when we find ourselves in interfaith dialogues that try to build unity particularly for commendable social and welfare programmes for; the homeless, or the fight against drugs and crime.

Chaplains in the services have to protect the distinctives of each faith tradition so that each worshipping community need not compromise what is essential to its beliefs.

Yet is it possible to conduct ourselves as Christians and exclude the place of Jesus Christ. Should we abstain from any such involvements?

If Christ is offensive to some, do we continue on in our ministry and deny the central event of our faith. Or do we hold fast to the scandal of what we affirm.
John who wrote this letter would say that there is no Christianity if Jesus Christ is not at the centre.

But perhaps there is another issue here for us; the more pressing question of whether it is appropriate for Christians to be silent about Jesus when meeting people of other faiths and persuasions. Roman Catholics, JW’s, humanists, Muslims.

When the time is right, when trust is secure, then the central theme of our faith, Jesus will be heard.

A college professor in a theological seminary in America chose this option recently when the University’s centre for Islamic Studies hosted a dialogue with a circle of invited Islamic leaders. Things went pear shaped when half way through; the Muslims politely dismissed themselves so that they could go out into the hall and pray towards Mecca.

The difficulty of course arises when that silence becomes no strategy at all; but a quiet concession to secularism, pc correctness, and tolerance. This is something we all need to carefully ponder.

The next question we need to consider is; should theological distinctives that is the really important parts; be set aside for the unity of the church?

In June of this year The Presbyterian Church in Ireland (PCI) at their General Assembly in Belfast received criticism from people outside the church and from within, over their stance taken for those who are in same sex relationships.
The resolution passed by a clear majority; ‘those in a same sex relationship cannot be full members of the church. The children from same sex couples cannot be communicant members.’

These verses in John 1 tell us that any Christian who does not embrace the true reality Of Jesus Christ in world history, his teaching, and why he entered into the world; has departed hugely from the faith of the early church.

But someone might say what about the other issues that can cause difficulty among Christians and at the same time help to define Christian identity; like charismatic gifts, infant baptism, ordination of women, style of worship. Should the church sanction diversity within its ranks on these issues and others for the sake of a larger unity?

Whatever we make of these important points John would have our starting point with; Jesus. All these concerns and others are legitimate and important. But they are NOT central. They are not Biblical imperatives. John reminds us that the person of Jesus Christ the Word of Life is at the centre of our theological identity.

Sadly, many theologians and Christians enter into dialogue with those who uphold the trends of modern secular society. And what happens is that the church often loses sight of the larger question of Jesus Christ who straddles both the church and the world that he made. He is largely cast aside for a so called more tolerant approach. Although tolerance is usually one way.

This of course is nothing new. The identity of Jesus Christ is still the same scandal of Christianity that sets us apart from the world. Jesus is the one theme we cannot jettison, no matter what the benefit may seem, or what the temptation.

Which takes us to the third and final question. What does it mean to see, hear, touch, Jesus today? Can it happen?

John in his writing suggests that there will be a continuity of Jesus for all generations not just the first one.

In the fourth gospel John 14; Jesus promises that he will never leave his followers as ‘orphans’ and that those who love him and are obedient will become Christ’s new dwelling place.

In other words, John does not see Christ’s Ascension where he ascended into heaven as the termination of his presence among us. His spirit given to his followers is his own spirit. First John 3 says; ‘and this is how we know that he lives in us. We know it by the spirit he gave us.’

Is this a mystical experience or figment of the imagination running around inside our heads? No, John says that Jesus is real. We have heard, we have seen with our eyes, and our hands have touched him.

He goes to great lengths to let us know that Jesus is not a myth. John and his fellow disciples can say as witnesses that they lived with Jesus and studied him closely even touching him. They knew that Jesus was real not a phantom, not a vision, but God in human form.

John is at pains to try and convince us that Jesus is the Word of life and through him eternal life may be gained. If it wasn’t for people like John, Paul, Peter and others who committed their findings to paper for us to read in early manuscripts and later in the bible; possibly none of us would be here this morning.

John wants us his readers to hear this news because then we may have fellowship, both with him and with the Father and the Holy Spirit.
In effect John is a witness who testifies to these things. As we all know witnesses have a powerful effect on people. In a court of law for example the witnesses are key to a hearing.

If witnesses cannot be produced the case is often dropped. Hearing a story told by a person who was there holds much more weight than reading or hearing something second hand. It is why John is so keen for us to know that he was there, that he saw, and heard for himself.

We may not be first hand witnesses to Jesus life, death, and resurrection; but we can read from the first-hand accounts, and we are witnesses to what he continues to do in the world and in our lives today. He is still real and still alive.
Many I have no doubt can reflect on things that have happened in their own lives as a result of Jesus’s intervention.

A word that has guided me in a particular direction.

Jesus is the written word of the Bible and he is the one who lives out what is written here. He shows John and ourselves what this word looks like in reality. He is showing us what God is like in human flesh.

I have to say it’s a very good idea God came up with. I would never have dreamed up something like that.

What about reflecting on people getting Healed from sickness. The malady they had is no longer; and doctors can only conclude, I don’t understand this.

Or reflecting on lives of people that have been completely transformed. I was reading recently in the Gideon’s magazine of a former, 3 A’s person; she was angry, alcoholic, and an atheist. Now she is living for Christ with her demons behind her. How is this possible?

Or Angola; Angola is the name of the State penitentiary in Louisiana America. Its staggering to hear about what happened in that jail a number of years ago with the inmates and how hundreds of lives have been changed through the word of God.

One of the founders of Communism Karl Marx wrote; ‘the first requisite for the people’s happiness is the abolition of religion’………… John writes; ‘faith in Jesus Christ gives you a joy that can never be duplicated by the world.’ Two very different ideas of how we understand joy.

John simply but powerfully writes this letter to share Jesus with us and to testify that he has appeared as the word of life; to offer us fellowship, eternal life, and true joy.

Rev. Alan Wilson is a Presbyterian Minister in Northern Ireland, where he serves a large congregation, supported by his wife. Before he took up the call to serve Christ, he was in the Royal Ulster Constabulary for 30-years. He has two children and two grandchildren and enjoys soccer, gardening, zoology, politics and reading. He voted for Brexit in the hope that the stranglehold of Brussels might finally be broken. He welcomes any that might wish to correspond with him through the Contact Page of The Postil.

The photo shows, “Flevit super illam” (He wept over it), by Enrique Simonet, painted in 1892.