As I and my family continue our inevitable pivot toward Orthodoxy, I have been reading more works on, you guessed it, Orthodoxy. This book, by the English theologian Timothy Ware, who as a bishop uses the baptismal name Kallistos, is a classic introduction to Orthodoxy.

It was first published in 1963 but has more recently been revised, so it is fully up 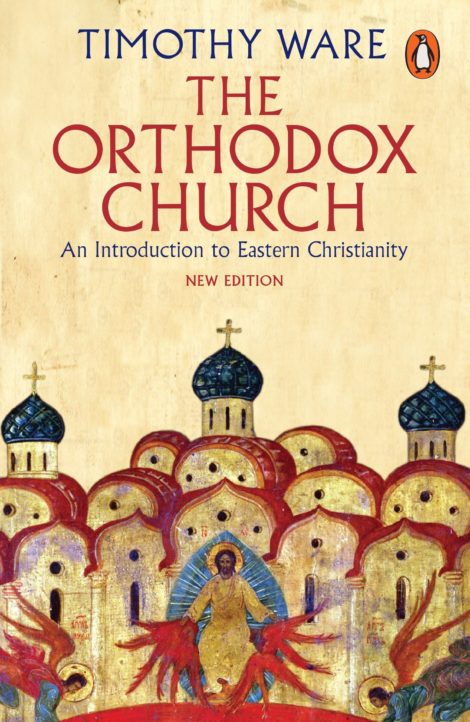 to date on history—and doctrine has not changed in Orthodoxy since 1963, or 963, for that matter.  I’ve actually owned the book for several years, but have only now read it, having been told by several people that it is very much worth reading. And they were right—it is an excellent book.

People in the modern West, even Christians, are largely ignorant of Orthodoxy. The Orthodox, to some extent at least, return the favor—Ware notes that Robert Curzon, a well-traveled English baron, in the 1830s was “disconcerted to find that the Patriarch of Constantinople had never heard of the Archbishop of Canterbury.” (He was not the Curzon who was Viceroy of India at the turn of the twentieth century and regarded as England’s greatest expert of the time on the Orient, though I imagine they were related somehow).

In the twentieth century and today, with modern communications and emigration, the Orthodox have become somewhat more prominent in the West—especially in America, where large numbers of Orthodox immigrants have established their own churches. Ware’s book is an attempt bridge the knowledge gap for Westerners.

The first two-thirds of the book is a detailed and well-written history of Orthodoxy.  Ware begins, naturally enough, with a definition of Orthodoxy: “…the Christians who are in communion with the Ecumenical Patriarchate of Constantinople.”  This excludes Roman Catholics and Protestants, of course, and also the Oriental Orthodox—the Church of the East, today rabidly persecuted by Muslims in places like Syria, and the Monophysite Churches, such as the Coptic Church in Egypt.

He also explains the organization of the modern Orthodox Church, which is complicated, but basically boils down to “a family of self-governing Churches,” all in communion and which, in theory, decide any disputed questions by convening in councils.  There is therefore no equivalent to the Pope, something that is turning out, after all, to be a feature, not a bug.

Ware discusses the seven general councils, the last one in 787, which determined the outlines of mainstream Christian beliefs. Naturally, since the Great Schism, the breach between Orthodoxy and Roman Christianity, is traditionally dated to 1054, these beliefs are shared by all Roman Catholics, and by many Protestants as well.

As remembered today, the most critical issues related to the nature of God in Christian doctrine, though many other matters were also decided at these councils.  For Orthodoxy, another critical matter was the treatment of icons, which are more central to worship than are images in the West.

Ware identifies iconoclasm with the ever-present Gnostic temptation in Christianity to denigrate the physical world as inferior and to be superseded in ages to come, whereas Orthodox (and all correct Christian) belief is that the material world is “very good” in God’s eyes and is itself ultimately to be “redeemed and glorified.”

All this was hammered out within the framework of the (Eastern) Roman empire, of which Ware and other Orthodox tend to have a highly favorable view. The traditional Western view is more negative, conditioned by Roman Catholic hostility and Edward Gibbon’s bigoted, dubious history, and tends, on a political level, to denigrate the Empire as Caesaropapist—that is, with the state dominating the church. Ware, at least, sees it as a symbiotic, cooperative, relationship, and he (along with many Orthodox, I suspect) sees Byzantium at its height as, if still far from an ideal society, the closest Christendom has gotten to one.

Next Ware narrates the complex events leading up to and following the Great Schism, covering everything from the theologian Saint Photius to the Normans in Italy to the Crusades. Interesting information, particularly showing contrasts to the West, frequently crops up, such as the continued prevalence and prominence of lay theologians in the East, where the secular education system had not collapsed as it had in the West.

Interspersed in this history is quite a bit of doctrinal discussion, such as details of the Hesychast Controversy, and the related distinctions made in Orthodoxy between God’s essence and energies, a topic that overlaps with the Scholastic innovation of univocity.

Later chapters cover, among other matters, the conversion of the Slavs, with a long and fascinating narrative about the Orthodox in Russia, and then detailed coverage of the twentieth century, a time of trials for the Orthodox (and renewed conflict between Orthodox and Roman Catholics in the Balkans, unfortunately).

Along the way, Ware also covers the precise current organizational structure of the Church (who knew that Finland was part of the Patriarchate of Constantinople?), and similar administrative matters, both in theory and practice.

The Orthodox, with justification, have a dim view of the Crusades, especially the Fourth, but Ware does tend to elide important details running counter to that narrative, such as that the First Crusade (in 1095) was largely a response to a specific request for aid by the Byzantine Emperor Alexios I Komnenos, after a series of brutal defeats at the hands of the Turks, beginning at the Battle of Manzikert in 1071.

In his complaints about the Crusaders, some of which are wholly legitimate, Ware even uses as fact the claim by Raymond of Argiles after the capture of Jerusalem in 1099 that “men rode in blood up to their knees and bridle reins.” You often hear this quote trotted out; I remember Bill Clinton doing so after September 11. Its modern use is to shift the focus from today’s Muslim atrocities to claimed thousand-year-old Christian ones, as if those were equivalent, or rather the latter far more important. Its earlier use, before the age of global Muslim terror, was to attack Roman Catholics and Christianity generally; it appears in atheist Enlightenment tracts.

No doubt, as in all medieval wars, lots of people were killed by the Crusaders.  But the quote itself is merely a metaphoric citation to Revelation 14:20, describing the end of the world and the slaughter by angels of the opponents of Christ, “And the wine press was trodden outside the city, and blood flowed from the wine press, as high as a horse’s bridle, for a distance of about two hundred miles.” That is, Raymond of Argiles wasn’t puffing himself for the number of people killed, but comparing the battle to the End Times.

Oddly, I have never seen this basic fact noted anywhere, though I must have seen the quote itself a hundred times.  Ware also relies heavily on biased and outdated sources like Steven Runciman, which undermines what he has to say.

On the other hand, at least Ware quotes an Englishman visiting Constantinople in 1677, “It doth go hugely against the grain to see the crescent exalted everywhere, where the Cross stood so long triumphant.”  (With any luck this exaltation can be reversed in the near future; as Europe careens into a ditch, aggressive renewal is as likely an outcome as permanent decline of the West, which might provide an opportunity such as, for example, Russia returning to the excellent goal of conquering Constantinople.)

Ware also notes the truism that although direct violent persecution of Christians was intermittent under Islam (though certainly frequent enough to keep the Christians in their place, and Christians were always required to be subordinate or face death), what ultimately caused most conversion to Islam was simply the financial and social benefits accruing to Muslims—martyrdom inspires, social debility does not.

Moreover, it is not really the Ottomans’ fault that their system of treating religious leaders of Christians as being simultaneously ethnic leaders has led to a long history of unfortunate intertwining of the two roles among the Orthodox, as well as corruption and ethnic chauvinism among the different Orthodox churches that were under Ottoman rule (i.e., all of them, except the Russians).

But the Armenian genocide rates not a word, probably because the Turks, on whose land (for now) the Ecumenical Patriarch must live, don’t want to hear about their recent slaughter of Christians.  On the whole, therefore, Ware lets the Muslims off far too easy, something that seems very common among the Orthodox.

In several places, Ware points out the tendency of the Orthodox toward slowness of action, of any type. This is partially organizational, the nature of conciliar decision making, and partially simply a trait that in this age of liquid modernity has so far been immeasurably beneficial (though I doubt if the Orthodox will be wholly immune to this corrosion in the wars to come—and, in fact, Ware himself was seen to be hedging his bets on homosexual “marriage” earlier this year).

The downside of this is that those not fond of action are also those less likely to accomplish things, which is, perhaps, why it is the Roman Catholics of the West who made the modern world, followed by the Protestants. The introspective nature of Orthodox practice and theology, focused on unchanging ritual, does not lend itself to crusade or, perhaps, to the drive that pushes humanity forward.

That begs the question, of course, whether pushing humanity forward is a good thing, or, instead, the monks of Mount Athos have the right of it. But for someone like me, who likes rockets to Mars, and beyond, the spirit of the Jesuits (the seventeenth-century ones, not today’s ones), or of Cortes, who “conquered Mexico for God, gold, and glory, and only a mundane imagination would distinguish these impulses, for they were one and the same,” is beneficial to humanity, and that is not really found among the Orthodox. Maybe there is a synthesis to be had, but I suspect that what makes the Orthodox who they are would not survive an attempt to make them more active and outward-looking.

The latter third of the book is doctrine, which, like the first part, is excellent. Here various Orthodox practices that contrast with their Western analogues are noticeable, especially the emphasis on mysticism over strict rationality, and that the Orthodox are more comfortable with some degree of ambiguity, with not delineating every matter of doctrine specifically.

Most differences between Orthodox and Roman Catholics are really matters of emphasis, such as Christ as victim versus Christ as victor, but Ware does an excellent job explaining the importance of certain differences that seem, at first glance, utterly obscure and unimportant, but are really not, such as the “Filoque,” the question (in the Nicene Creed) whether the Holy Spirit proceeds from the Father (the Orthodox position) or the Father and the Son (the Roman position, a medieval innovation).

Among other subtleties, Ware notes that the Orthodox belief is that the Roman position depreciates the personal characteristics of each individual member of the Trinity (an effect similar to, though arising differently from, the abominable use of “gender-neutral” language for God).

Around that explanation Ware also offers a fantastic discussion of the Trinity itself. He further discusses the importance of prayer and ritual, the rejection of Quietism, the specifics of ritual, and much more. And he notes the crucial Orthodox emphasis on theosis, the goal of divinization, of ultimate unity with God’s energies (though not His essence).

He ends with a plea for reunion of Christians, something devoutly to be wished, but which looks even less likely nowadays, given the corruption of most Western Christians—though maybe the focus should not be on the West, but on the rest of the world, and what can be done there. We will see soon enough, but either way, my bet is that Orthodoxy will have a much more prominent role in the immediate future of the world than it has played in the past thousand years.

Charles is a business owner and operator, in manufacturing, and a recovering big firm M&A lawyer. He runs the blog, The Worthy House.