The origin of the tyranny is iniquity, and springing from a poisonous root, it is a tree which grows and sprouts into a baleful pestilent growth, and to which the axe must by all means be laid. (Policraticus) 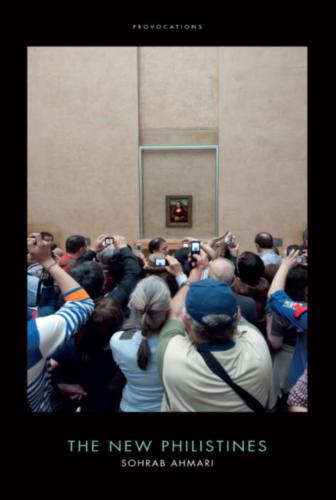 Why do “artists” keep churning out ugly things that we’re all supposed to admire? Whatever happened to beauty which would inspire people to reach for the sublime?

Theater and literature vaunt marginality, while railing at any perceived instance of oppression (present or past, especially the past, since it’s safer).

And it seems that architecture likely got a discount on Bauhaus and Brutalist cookie-cutters, since it keeps erecting monstrosities that vie for last year’s Stalin prize.

Inspiration vanished long ago from the arts, and into this vacuum slogans took hold like demons of chaos.

Therefore, the plastic arts are ugly. Theater is ugly. Literature is ugly. Architecture is ugly. Pop music is ugly But why?

Sohrab Ahmari sets out to answer this question in The New Philistines, which is a concise and blistering critique of what gets palmed off as “art;” and in the process he lays waste the predictable agendas that now populate galleries, the stage, the screen, the printed page, and urban sprawls.

Those perplexed by what is happening in the world, should rush to pick up this insightful and well-thought-out book. Ahamri’s style is clear and direct, and it’s much to his credit that he shows the art-world for what it is – a sham garbed in the urgency of politics.

The lifeblood of this relentless cultural fraud is identity politics, and those fully infused with it are “identitarians.”

Of course, Ahmari recognizes that the problem runs much deeper than just art, but he wants to keep his focus narrow so as not to blunt his assault.

Under his powerful lens, the character and quality of identitarian “artists” is clearly discernible – so intently have they navel-gazed that they now “think they already have the answers: a set of all-purpose formulas about race, gender, class and sexuality, on one hand, and power and privilege, on the other.”

The lust to dominate…

The greater issue is the pernicious influence of postmodernism, which has successfully sabotaged truth and therefore values.

As a result, a human being doesn’t exist – he’s simply a mishmash of social constructs, which can be reconfigured in any which way in order to win the culture war (which is the destruction of patriarchy as well as the entire theology of the western world – truth and morality).

Postmodernism, indeed, is the staff of life of all universities, where professors have happily ruined the minds of hapless students, one generation after another.

In fact, the entire education industry is best described as an efficient brain-washing facility which produces fully programmed and compliant citizens who can be controlled (triggered) by all the right words (commands).

Thus, “art” is part of this industrialized annihilation of western culture, which is why it can only produce unimaginative and trite political strategies to bring about social justice (the validation of one group identity over another).

Merit or talent died long ago; there is only “speaking truth to power.”

In other words, art is now perpetually engaged in the overthrow of oppression in all its myriad manifestations, by seeking to dismantle perceived hierarchies (power-structures).

a sham garbed in the urgency of politics.

Therefore, identitarianism maintains that to even speak about ugliness and beauty, or falsehood and truth, is to participate in the discourse of domination and oppression (“phallogocentrism,” to use the shibboleth coined by Jacques Derrida).

Any kind of dialogue with power means the validation of power. Thus, speech itself must always be of the approved, validated kind (never mind, freedom, which is just another strategy to control the weak-minded).

Ahmari calls these identitarians the “new philistines,” although they call themselves by a far more militant title, “Social Justice Warriors,” who are nothing but professional revolutionaries, and for whom art can only be political action – and nothing more.

In their worldview, it’s one race against race, one group against another, and one identity against identity. Thus, “art is worthwhile if it validates the narratives, identities and feelings of ‘marginalised’ groups or, conversely, lays bare the injustices of the ‘mainstream.’”

Once the battle lines are so starkly drawn (and it’s always a battle for postmodernists), then the choices too are limited. Since there are no universal rights, no overarching truth, there is only identity politics.

Ahmari does an excellent job exposing the dangers of this ruinous ideology, and the dead-end it has run into in the arts.

However, he is less certain what comes next.

We can all agree that postmodernism will destroy us, if we let it (and so far, we’re letting it). But are we going to do anything about?

engaging in a form of exorcism

It’s obvious to see (to those who want to see) that the current culture war is really a theological war.

These are the questions we have to answer a a culture:

Notice the one word that keeps repeating – “power” – which is the be-all and end-all of postmodernism and its daughter, identity politics.

So, where shall we turn? What shall we do?

These questions will have to be answered by us, or by the generations that follow, since the devastation is very deep.

We can pretend that somehow things will eventually fall back into place (they won’t, since there really is no place to fall back into).

Or, we can begin asserting the urgent necessity of truth and beauty (morality) for human life.

Let’s not be naive – this will mean engaging in a form of exorcism, where those possessed by ruinous ideas will need to be set free into the realm (structures) of truth.

We shall have to act, lest culture become our prison – and knocking down cultural prisons means much suffering.

“The lust to dominate…inflicts great evils on the human race,” St. Augustine observed long ago.

Are we ready for such evils?

Ahmari’s book should be widely read by those who might still need convincing that fiddling is not going to put out the fire that is now consuming our Rome.

The time surely has come to decide where we stand? For good, or its opposite? Ahmari’s book might well help you make up your mind.