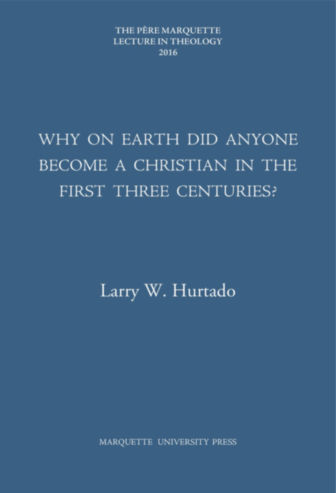 “Why on earth did anyone become a Christian in the first three centuries?” This is a remarkable question, posed by Larry W. Hurtado in his 2016 Père Marquette Lecture in Theology.

It has never been asked by historians of early Christianity. Usually, the rapid growth of devotion to Jesus is charted or explained by way of the hows and the whats of group dynamics – that is, by trying to understand how movements spread over time.

Past focus, therefore, has been on examining the external conditions, social and economic, of the Roman Empire, or the study of fringe groups and their interaction with the majority, or the role of missionary work to gain converts.

This is all well and good, and it has given us a precise and often thorough understanding of what was going on in the Roman world which made it ideal ground in which Christianity very rapidly grew and then flourished.

But the more fundamental question is why did people become Christians in the Roman world, given the fact that by doing so they destroyed all hope of a normal, even prosperous life?

Hurtado sets out to examine this problem in is lecture. He is professor emeritus at the University of Edinburgh who has spent a life-time studying early Christianity.

One of his greatest contributions is the now well-established view that Jesus was seen as divine from the time of the very first Jewish believers – it was not a gradual process as had been previously assumed. Therefore, Jesus as both God and man is the foundational belief from the very beginnings of the faith.

One of the most remarkable things about early Christianity is how quickly it spread across the Roman world. By the time Paul became a follower of Jesus (around 30-35 AD), there were already Christian communities in most major urban centers.

This expansion only increased in the first three centuries, so that Christians were found from Carthage to Egypt to Mesopotamia, and from Jerusalem out to Rome, Spain, France, and Britain.

These early Jesus-believers came from all walks of life (rich and poor, gentry and commoners, soldiers and politicians), and therefore included men and women, the young and the old.

It is difficult to know the exact of number of these early Christians, but they must have been significant enough to warrant notice from the Roman government.

Such “notice” came in the form of schemes that might curtail the rapid growth of the new faith, as well as laws that made being a Christian to be equivalent to being an “atheist” and therefore an enemy of the state.

Thus, it is this “notice” that Hurtado discusses at length in his lecture. Simply put, there were very serious costs involved in becoming a Christian in the Roman world. Religious affiliation was not as casual, or unimportant, as it is today.

If you became a Christian in the first three centuries of the last millennium, you immediately put yourself at a very serious disadvantage and even danger, socially, politically and judicially.

Politically, Christians were held to be atheists under law because they denied the existence of the Roman gods and refused to worship them.

There were no niceties as the “separation of church and state” in the Roman world. Both religion and politics were one and the same, in that the state reflected the order and harmony of the universe by way of the various public sacred rituals in which everyone participated throughout the year.

When Christians chose to opt out of these rituals, it was seen as a signal that they sought the downfall of Rome. Of course, the Jews also refused such participation, but the Romans simply saw this as a national particularity and tolerated it.

But things were different with Christians because as converts, they were not a nation. They had been born and raised pious pagans who now followed a new cult. The Romans despised cults.

Thus conversion was akin to sedition as far as the state was concerned, because by denying the rituals and the gods, you were inviting the forces of chaos to be let loose, come what may. Christians, then, were like dangerous anarchists.

Conversion also put the convert at odds with his family, because by becoming Christian, the convert was forever abandoning his ancestors; and this in a world in which family was everything was seen as the ultimate betrayal. We must bear in mind that the actual practice of religion among ordinary people in the Roman world was ancestor worship.

Thus, by becoming a Christian, a person became both a criminal and a rootless alien in Roman society. These were powerful disincentives.

Then, why did Christianity continue to grow so much in number? What did Christianity offer that people risked life and limb, social privilege, and even family bonds to become followers of Jesus?

This is the essential point – Christians had to deal with lethal prejudice in the Roman world.

As Clayton Croy puts it, “the threat to Christians’ lives pervaded the first three centuries…Even when martyrdom was not being carried out, all that stood between Christians and the executioner was the lack of a delator (an accuser).”

Being an enemy of the state and a social outcast meant dealing with humiliation, ostracism, threats, hatred, disdain, ridicule, abuse, imprisonment, and death.

This hatred is also evident in the way Christians are depicted in Roman literary works. They are described as evildoers, prone to incest and murder; or as charlatans and buffoons who believe the most outrageous things; or as lowlifes and scum of the earth; or as intellectually inferior.

Thus, from the highest levels of society down to the street-level, Christians were despised and derided. So, again, given such strong disincentives, why did people convert in such large numbers to Christ?

Here, also we enter into the reality of Christians living ordinary lives in the Roman world, a reality described by Paul, for example, in the First Letter to the Corinthians Chapters 7-10. Paul tries to explain how Christians are to live in a society openly hostile to them.

What was to be done with lapsed Christians, who simply could not cope with the hostility and went back to paganism?

Such questions provide insights into the dilemmas that Christians faced – how were they to live their lives in a pagan world that hated them? Being a Christian was dangerous, embarrassing, frightening, confusing, intimidating, and certainly challenging on a daily basis.

All this exemplified by the life of St. Paul. He came from a privileged background, was educated at the best school, and was well-off.

But he gave it all up to follow Christ, and his life thereafter was miserable (from a worldly perspective) – he was abused, threatened with violence, humiliated, routinely and seriously beaten, even to the point of death, and finally executed (beheaded) by the state.

Why would Paul want to undergo all this misery just to be a Christian?

What was it about the Christian message that no amount of violence, threats, disadvantage, abuse, and ridicule could dislodge? What kept Christians loyal, once they converted, to stay with their new faith?

More importantly, what made Christianity grow in such a rapid way, which is unprecedented? Robin Lane Fox aptly sums up this unique occurence: “…no other cult in the Empire grew at anything like the same speed.”

Since Hurtado’s focus in this lecture is to explore the nature of his question, he can only offer two answers to it.

First, for the first time in history, Christianity linked the divine with love, that God is love. The Greco-Roman gods were neither kind nor loving; they were aloof and harsh when forced to deal with humans. Their job was looking after the cosmos, not people.

Second, Christianity, again for the first time in history, offered an everlasting life to the individual, and even an eternal life for the resurrected body. No one in the ancient pagan world really believed that any sort of existence came after death for each individual. Christianity offered something unique.

Whether both these answers were strong enough incentives to sustain a person facing lethal prejudice, Hurtado does not say, since such explanation is beyond the scope of his argument.

Rather, he is to be congratulated for pointing the study of early Christianity towards a new path – in that history is far more than impersonal economic forces and sociological conditions.

Hurtado’s question, “Why on earth did anyone become a Christian in the first three centuries?” shows that history is determined not by materialist causes, but by ideas that people believe, embody, and then live out.

It is this living out of ideas that is the very essence of history.

As to why people became Christians despite hostility, perhaps the answer is to be found in something that Jesus said, “Peace I leave with you; my peace I give you. I do not give to you as the world gives. Do not let your hearts be troubled and do not be afraid” (John 14:27).

Justin the philosopher, who became a Christian in this hostile Roman world, wrote of his conversion in his Dialogue With Trypho. He hints at this peace offered by Christ when he says that he became a Christian because he found in the faith a philosophy that was both safe and profitable.

Thus Christianity offered ideas and deep inner peace that no one else offered.

Certainly, the Romans of the first century were no different from people in our own era – everyone seeks inner peace, few know how to find it. Once you find that peace, you will never want to give it up. No matter what. Cue the martyrs.

Larry W. Hurtado, Why On Earth Did Anyone Become A Christian In The First Three Centuries? Milwaukee, WI: Marquette University Press, 2016.

The photo shows, “Nero’s Torches,” painted in 1876, by Henryk Siemiradzki.