One of the more famous volcanic eruptions took place in the late summer of the 79 AD not far from Naples.

In the aftermath, the Roman resort towns of Herculaneum and Pompeii lay buried in neatly ten feet of ash. When these towns were excavated, in the nineteenth and twentieth centuries, they showed themselves to be time-capsules, capturing daily Roman life.

Many have been the explorations and questions about Pompeii – one of the more persistent ones being…Were there any Christians living there in that fateful year of 79 AD?

At that time, Christianity was spreading (and rather quickly) throughout the Roman world, and it would not be too great a stretch to imagine the presence of Jesus-devotion in Pompeii. We do know that St. Paul landed in the harbor town of Puteoli (modern-day Puzzuoli) in the year 61 AD (Acts 28: 130-14), which lies about thirty miles west of Pompeii.

Paul mentions that there were Christians in Puteoli, which means that followers of Jesus were already to be found in smaller towns around Naples.

This view, however, fell out of favor, and scholarly opinion swung the other way, maintaining that there was, in fact, no real evidence of Christian presence at all.

In a rather remarkable study, filled with great insight as well erudition, Bruce W. Longenecker has upended this scholarly assumption (for it is no more than that), and has shown once and for all that there were indeed Christians in the fated Vesuvian town.

His book, The Crosses of Pompeii. Jesus-Devotion in a Vesuvian Town (which follows his earlier work on the cross as a Christian symbol before Constantine, also 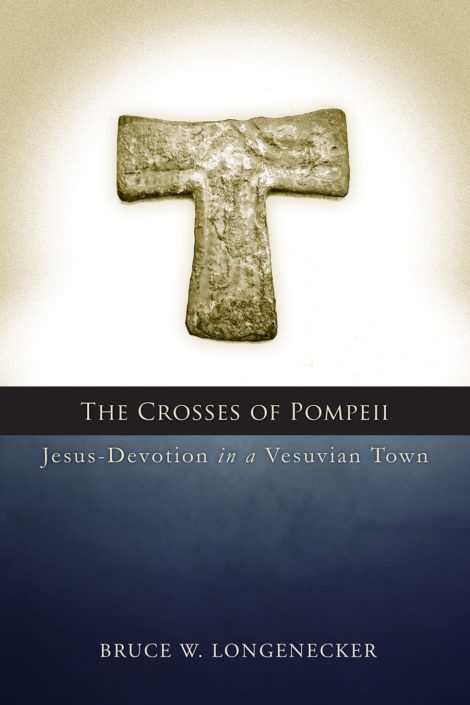 reviewed in this magazine), offers evidence that cannot be ignored by scholars of Christian presence in Pompeii.

As in his previous work, Longenecker makes use of material remains to make his point.

It can be said without a doubt that books such as this are rare in historical studies – for it has succeeded in rewriting a misunderstood and ignored aspect of Roman Christian life.

The most fascinating part of this book is Longenecker’s own documentation of examples of crosses carved into the Pompeian street paving stones. Through his own endeavor, he has searched and found eighteen such crosses so far. He feels that there might well be more.

The important thing to note here is that these crosses are not just notches or mason marks. They are, in fact, Christian crosses.

How does Longenecker know this? As the book reveals, these crosses function first as pointers, which might lead a Christian to the most important Christian place in Pompeii, namely, the bakery in the Insula Arriana Pollians, where a cross was found, in a prominent place on the wall, made out of raised plaster.

As well, these crosses serve a protective function, in that they are incised onto busy streets to offer protection. The use of apotropaic objects and symbols was prevalent and common in the Roman world, and the cross certainly fulfilled that purpose in Pompeii.

Longenecker rather cogently points out that since these crosses are not modern surveying marks, nor mason marks, nor ancient traffic signs to keep everything moving on the street, they can only be what they look like, Christian crosses.

They have been laid out, with great effort, in a discernible pattern, or plan – to lead the wayfarer to a Christian place.

This, of course, immediately suggests that Christians did not hide their faith, but rather openly displayed it, for all to see. This also very much underscores the behavior of the various martyrs who never hid their faith, when they could easily have done so to escape death.

These street crosses, then, strengthen the other evidence that exists in Pompeii for Christianity, namely, the Christianos Graffito; the Vivit Cross in Insula 1.13; and the Meges stamp-ring.

The graffito, found in a large residence (7.11.11), reads, “audi Christianos…” (“listen to the Christians…), and hints at the practice of preaching which was so helped the quick spread of the faith in the Roman world.

The Vivit Cross, when interpreted means, “he lives,” which is a very powerful summary of the early kerygma – Jesus lives.

The Meges ring shows a cross surmounting a symbol for eternal life. Again, a very concise summation of the Christian message.

These three pieces of evidence have largely been ignored in the scholarly literature dealing with Pompeii. Bur such has been the fate of Pompeii, when it comes to scholarship, which is notorious for being shoddy and haphazard.

This explains the lack of attention given to the question of Christian presence in Pompeii.

Added to this is the fact that scholarly opinion tends to the blind leading the blind, where something is assumed to be settled and done with, and it is then endlessly repeated as proven fact, when it is no more than an opinion that has gained currency.

Andrew Wallace-Hadrill has captured this problem with Vesuvian scholarship clearly when he stated: “Each generation discovers with horror the extent to which information has been ignored, neglected, destroyed, and (the most wanton damage of all) left unreported and unpublished.”

Thus, for many decades scholars, who should have known better, kept repeating what they themselves had only heard – that there were no Christians in Pompeii.

Bruce Longenecker has finally set the record straight. Indeed, there were Christians in Pompeii, and they were an integrated part of daily Roman life, who openly displayed the prime symbol of their faith – the cross.

This remarkable book comes to a moving conclusion in this way… “When the end came on that fateful day in 79, one thing might have caused them (the Pompeian Christians) to look different from their contemporaries. Many of their peers, desperately fleeing the doomed town, fearfully clutched apotropaic devices and statuettes of their deities, from whom they sought deliverance from death. By contrast…Jesus-followers may have left their hands intentionally empty. And perhaps a few with empty hands died with one word on their scorched lips, vivit [He lives].”

The history of Vesuvian Christianity has finally taken a step forward.