As often happens in matters of scholarly opinion, what is accepted as “true” turns out not to be so upon deeper analysis or newer evidence.

Thus, for the longest while, it was customary to read in books dealing with early Christian history that the use of the cross only gained currency after endorsement by Constantine.

This view was fully expounded by Graydon Snyder in his now “classic” work, Ante Pacem: Archaeological Evidence of Christian Life Before Constantine.

Many may not know or remember, but poor Professor Graydon was an early casualty in the now-normal “social justice wars.” He was an ordained minister, and had the misfortune of reading a Talmudic account of a man falling from a tree on a woman and “knowing” her by accident.

The Talmud said that this could not be rape. But a female student in the lecture thought otherwise and declared the reading of this passage as the justification of the sexual brutalization of women and forthwith lodged a complaint.

The university, ever eager to forestall offence no matter who gets destroyed in the process, slapped the then-63-year-old professor with a formal reprimand and distributed a memo campus-wide which stated that Graydon had “engaged in verbal conduct of a sexual nature” that had the effect of “creating an intimidating, hostile or offensive” space in his classes.

This was not the end of – the university then assigned a monitor that sat in each of Graydon’s classes and lectures, taking notes of anything that might be considered offensive. Graydon soon retired.

Let the date of this incident come as a valuable lesson to all – the demise of the university system happened long ago. This annihilation of a good man’s character occurred back in 1994…twenty-four years ago.

The 1990s were the halcyon days of such random acts of social justice, when universities eagerly dragged the Trojan horse of postmodernism into the Academy, worshipped it with much fawning, drank the heady wine of relativism and feel into the deep sleep of nihilism – from which they never awoke, for the barbarians descended from the belly of the wooden beast and conquered the hapless “intellectuals.”

And, now only various forms of self-indulgent destruction are offered by universities, where once a proud tradition of civilization held sway. Such is the fate of all Troys, if given into the hands of fools.

But let us return to the matter at hand.

In his book, Graydon categorically decided that no evidence existed for the cross as a Christian emblem before Constantine. This led to the false assumption that Constantine “invented” the cross as a religious sign, because he chose to use it during the famous Battle of the Milvian Bridge in 312 AD.

Given the popularity of Graydon’s book, this view became the “Gospel truth,” and is still widely repeated without question by historians of early Christianity.

Embedded in Graydon’s argument was a curious turn to psychology…since the cross was a method of execution of criminals, it was, thus, an emblem of shame, and could never have been elevated to a sign of the faith before Constantine’s imperial sponsorship of Christianity.

Popularizers then went to work, imagining Christians in the Roman world desperate to hide their faith, even descending down into catacombs to carry out their worship. And that they invented arcane signs to recognize each other, which only fellow-Christians would know (like the “Jesus-Fish” now often found on car-bumpers).

It all sounds plausible, but is simply not true.

Rather, the primary sign of the faith from its earliest beginnings was not the fish or the anchor or the wheel, or even the Sator-Square – but the cross itself. Graydon’s view is nothing other than an exercise in myth-making, which is finally destroyed by a new book that takes a fresh look at the entire “cross-debate” and offers facts rather than myths.

This book is The Cross Before Constantine. The Early Life of a Christian Symbol by 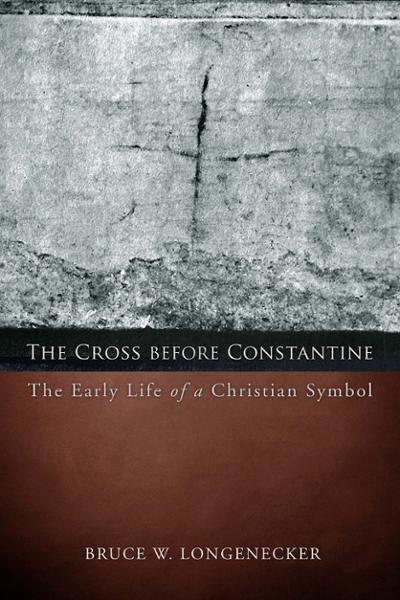 Bruce W. Longenecker, which offers incontrovertible evidence that, from earliest times, the cross bore not only symbolic value but also theological significance.

The evidence Longenecker marshals to bolster this conclusion is impressive indeed, for it engages not only extensive material remains, but also solid literary testimony.

Such an approach also fully justifies the unique character given the cross in Scripture, such as, St. Paul’s famous exposition of the double conundrum of the cross – as a mark of utter shame and the very token of final triumph: “For the preaching of the cross is to them that perish foolishness; but unto us which are saved it is the power of God” (I Corinthians 1:18).

Such singularity of the cross links back to Jesus himself, with his well-known exhortation – “If any man will come after me, let him deny himself, and take up his cross, and follow me” (Matthew 16:24).

In, effect, then, Longenecker proceeds to uncover not simply the “life,” but the double-life, of the cross – as an instrument of painful execution, and as a symbol of life eternal.

He begins by examining the recent discoveries of various Jewish ossuaries that are engraved with crosses, either erect (+) or recumbent (x) – and these engravings are neither masons’ marks nor decorations.

Thus, the cross had significance in Jewish religious life during the Roman era. And this significance is grounded in Ezekiel 9: 4-6, where the cross is also the “mark” of God, which sets apart the faithful from the rest condemned to death, and is thus the emblem of life, a particular gift of divine grace.

Among the examples Longenecker shows are the Nicanor, Yehudah, Shalamsion, and the Jehosah ossuaries.

And because the early Jesus movement branched out of the faith of the Jews, Longenecker uncovers the earliest record of the cross’s double-life, both as a mark of God for mankind’s salvation, and as the process of execution that God, in Jesus, bears himself to bring eternal life to mankind.

Thus, the cross has importance far older than Constantine.

Next, Longenecker lays out an elaborate inventory of material and literary evidence.

He discusses the Alexamenos Inscription, the inscriptions in the Baths of Neptune in Ostia, the inscriptions in the catacombs of Rome, rings showing the cross, the famous Crucifixion Gem amulet in the British museum, the various inscriptions in Asia Minor, the graphic use of the cross in the gnostic Books of Jeu, the staurogram in Manuscript P66, and even the rather mysterious cross in a Pompeii bakery (Longenecker has devoted an entire book to the crosses in Pompeii, which is reviewed elsewhere in this magazine).

The literary testimony is even more extensive, and Longenecker deftly moves through it all to strengthen his case.

Thus, he makes use of the earliest witnesses from the first half the of the first century, namely, the Acts of Thomas; the Works of Hippolytus; Cyprian’s Testimonies and To Demetrianus; Tertullian’s De corona, On the Resurrection of the Flesh, Against Marcion; and Letters; Lactantius’s Divine Institutes; Clement of Alexandria’s Miscellanies; Minucius Felix’s Octavius (the first Christian work in Latin, little known outside scholarly discussion).

Moving on to the second century, Longenecker musters the Acts of Peter; the Acts of Paul and Thecla; Justin Martyr’s First Apology, Dialogue with Trypho; the Odes of Solomon; the commentaries of Ignatius of Antioch’s on Ephesians, the Smyrneans, the Trallians; and the famous Fifth Ezra; the Epistle of Barnabas; the Gospels and the Letters of St. Paul; and the Johannine Apocalypse (Revelation).

The conclusions that Longenecker draws from this extensive evidence is as follows:

With his impressive and sedulous book, Longenecker has finally put out to pasture all the old myths about the cross, perpetrated by Graydon and his followers.

In other words, the cross was a well-established Judeo-Christian religious emblem long before Constantine took it up as his “coat-of-arms.”

For Christians, from the very beginnings of their faith, the cross had a double-meaning: it was the “mark” of God which set apart the believer from the non-believer, with all the significance of life and grace which this election signified. And, secondly, by extension, the cross became the “mark” that Jesus, the God incarnate, himself bore to embody an eternal life bought through horrific sacrifice.

The paradox becomes the solution – the “mark” of God becomes the instrument of torture, and then returns as a greater sign of life.

It is this paradox that St Paul explains: “But God forbid that I should glory, save in the cross of our Lord Jesus Christ, by whom the world is crucified unto me, and I unto the world” (Galatians 6:14).

The cross is, in effect, the summation of the entire Christian proclamation – because of Jesus, death, though horrid, is not the end.

Longenecker persuasively demonstrates this historico-theological process in the great gyre of history.

The photo shows, “Christ on the Cross,” by Carl Heinrich Bloch, painted in 1870.