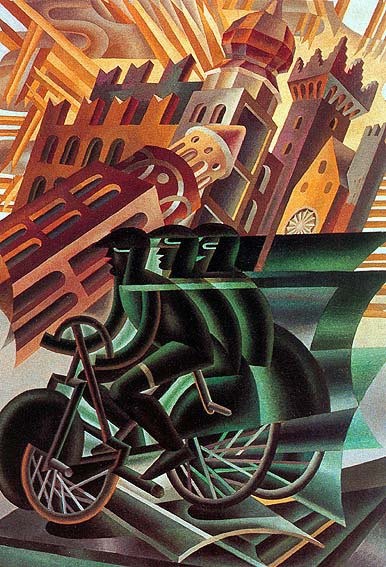 Whenever people are trying to define the modern age, there’s an inevitable phrase that gets tossed around. We hear it all the time – “We are an age of technology.”

And when people are asked what this phrase means, they invariably generate a list – cars, televisions, space probes, computers, the microchip – all things that were mostly science fiction just a hundred years ago. How did we come so far, so quickly?

Our age is technological not because of gadgets, but because of the idea of technology. The gadgets are a mere by-product. The way we think is profoundly different from all previous human civilizations.

We perceive things in a systematic way. We like to build conceptual structures. We like to investigate and get at the root causes of things. We like to figure out how things work. We see nature, the earth, the universe, as a series of intersecting systems. And this difference is the result of technology.

Essentially, we are dealing with two Greek words: techne and logia. Techne means “art,” “craft,” or “handiwork.” But logia is more interesting. It means “account,” “word,” “description,” and even “story.”

It is the root of other important words in English, such as “logistics” and “logical.” And it even reaches into the spiritual realm, where “Logos” is intimately connected with the mystery of God in Christianity, where God (Logos) is made flesh in Jesus Christ.

Therefore, technology is not really about gadgets. The word actually means “a description of art,” or “a story of craft, handiwork.” Anything we create is technology. Be it the microchip, a film, a novel, an airplane, or a poem.

But this is only the first layer. We need to dig further. Why do we use a Greek word in the first place? This question lets us dig right down to the foundations.

The word is Greek because the idea is Greek. This is not to say that other cultures did not have technology; they certainly did; the Pyramids are certain proof of that, as are the Nascan lines in the desert.

However, we have already established that technology is not about gadgets, or objects that we create. It is a particular mind-set.

Technology is visualizing the result, or perhaps uncovering that which lies hidden within our imagination. It really is still about giving an account of art, about what we can do with our minds.

But how is all this Greek?

The idea of technology was given to us by one specific person – the Greek philosopher, Aristotle(384-322 BC).

At the age of twenty, Aristotle found himself in Athens, listening to the already famous Plato (428 B.C. to 348 B.C.).

But the pupil would become greater than the master. Interestingly enough, Aristotle too had a famous pupil – Alexander the Great. Aristotle certainly had the ability to transform the way people thought – down to the present.

It was Aristotle who stressed the need not only for science, but a conceptual understanding of science. It was not enough just to be able to do things, such as craftsmanship that was passed down from father-to-son in his own day, and in many parts of the world today.

It was important to understand how things were; how they functioned the way they did.

It was Aristotle who taught us to break down an object into its smallest part so we can understand how it is built and how it operates. Where would science be today without this insight – which we now take as common sense.

But before Aristotle, it was not common sense. The common sense before his time was to accept things the way they were, because the gods had made them that way, and who were we to question the will of the gods. This was the pre-technological mindset.

Aristotle, like Plato before him, taught that nature and human beings behave according to systems that can be recorded and then classified, and understood and then applied. These categories provided mental frameworks within which we could house our ideas.

Our ability to classify, categorize, and explain – in short, our technology – is the invention of Aristotle. Before he came along, we were only groping in the dark – if we dared grope, that is.

The photo shows, “Cyclist Through the City” (“Ciclista attraverso la città”), by Fortunato Depero, painted in 1945.