On November 25, in the year 885, a fleet of longboats appeared, just beyond the Île-de-la-Cité along the Seine. It was a dreaded but frequent occurrence in West Francia of the late ninth century.

Viking marauders, known as Danes by their contemporaries, plied their terror up and down the Seine and the Loire with relative ease, for the Carolingian rulers were intent on various internecine struggles and had little time for matters such as infrastructure (walls and fortifications) and the raising of levies for defence.

This absence of central command allowed the Norsemen not only to rove largely unhindered but also to set up permanent camps in Neustria: around the 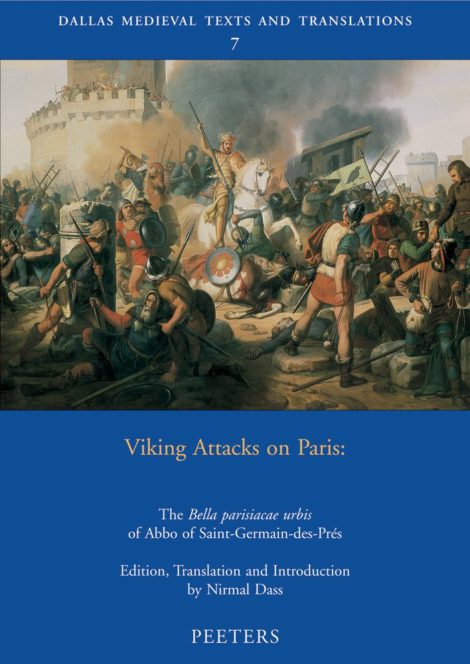 mouths of the Seine and the Somme, around Fécamp, Rouen and even on Jeufosse.

The ensuing instability compelled some abbeys and monasteries, an especial target of the Vikings, to relocate to remoter areas; this was also true of smaller villages and hamlets. This was an abandonment of vast tracts of land, which the raiders eventually appropriated; the Norsemen were looking not only for loot but also territory; England had already yielded them the Danelaw.

Paris had been besieged three times previously; on each occasion it had been saved only by the payment of ransom; a preferred late Carolingian tactic when dealing with the raiders.

That November day, the Vikings were led by a chieftain named Siegfried, and he came to negotiate rather than lay siege. Siegfried proposed a simple plan: the Parisians were to allow his men unopposed passage, down the Seine, that they might ravage deeper into the Frankish heartland. In return, they would leave Paris unmolested.

This parley might not haven been needed previously, but about twenty years earlier, in 864, the citizens of Paris had built two bridges on either side of the Seine, precisely in order to hinder easy access to the Norsemen.

This construction was in accordance with the terms of the Edict of Pîtres, one of the few viable actions taken by Charles the Bald in West Francia against the Vikings. Siegfried put the Parisians in a moral dilemma – should they save themselves and put their fellow countrymen at risk?

The choice was not hard to make, and the Viking request was refused. As a result, the city was besieged; the Norsemen likely wanted to capture Paris in order to use it as base for further incursions, just as they had captured Rouen in 841.

The Parisians, though few in number, put up a heroic defense, led by such able men as Count Odo, or Eudes, Bishop Joscelin and Abbot Ebolus.

Despair, terror, misery and even plague beset the city in the ensuing months, but its citizens sustained themselves through their faith in Saint Germain, the heavenly ward of Paris.

In the end, Charles the Fat, the ruler of West Francia, made use of the classic Carolingian ploy in dealing with the Norsemen – he bought them off with seven hundred pounds of silver, and he also allowed them free passage down-river into Burgundy.

All in all, it was a profitable eleven months for the raiders. This fact was not lost on the Parisians and it greatly embittered them, and when Charles the Fat died, Carolingian rule reached the point of no return – Count Odo became the first king of a new principality – France.

There would be a last gasp or two of Carolingian control, but France would continue to proceed along a different trajectory – for King Odo was the first Robertian ruler – and thereby the very first Capetian – in that Odo was the granduncle of Hugh Capet, to whose descendants France would become a rich patrimony.

Also on that November day, a young monk named Abbo, of the Abbey of Saint-Germain-des-Prés, watched from the walls of Paris, where he and his fellow citizens found security, and in time, he would come to record what he saw, what he understood and what he believed in his heroic poem, the Bella parisiacae urbis, that is “The Battles of the City of Paris.”

We know little about Abbo other than that he lived out his days in his Abbey and left to posterity his unique poem as well as a few sermons. The unique witness preserved in the Bibliothéque nationale de France may very well be in his own hand.

But what he has left us is a rich legacy of a fascinating period in French and European history.

The photo shows, “A Viking Raid,” by Ferdinand Leeke, painted in 1901.