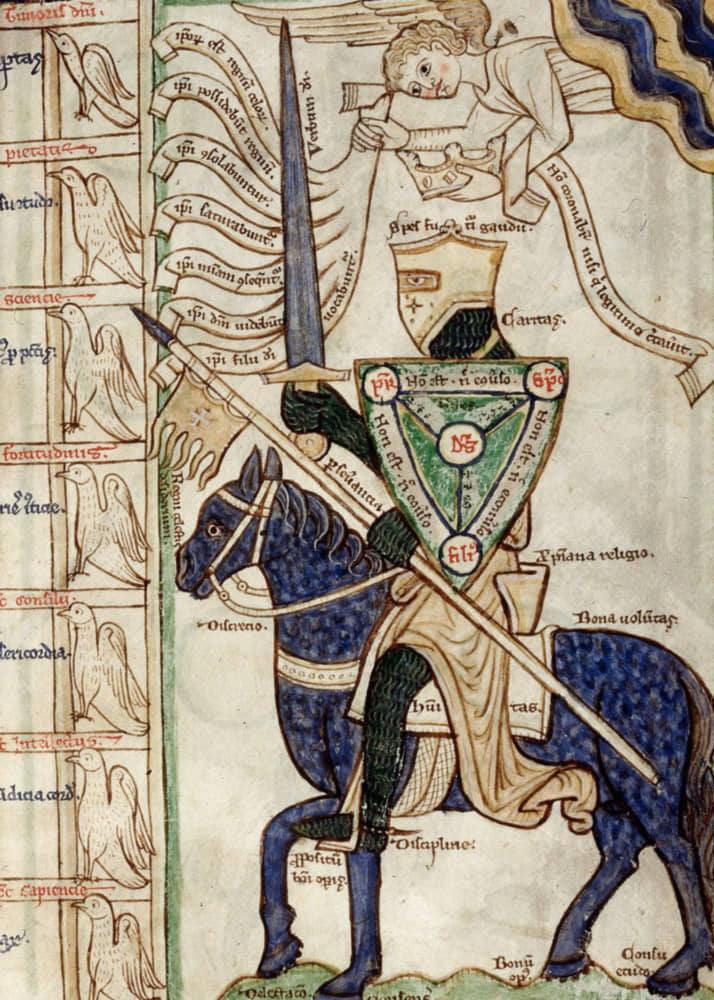 When Ron DeSantis, Florida’s conservative Republican governor and likely presidential candidate, said recently we need to put on the “full armor of God,” the media looked at him like he was crazy—or from another planet. But his supporters gave him a standing ovation.

As secular liberals, most of the press have no familiarity with the phrase, its origins, theology, or importance. They are bigots against religion and unschooled in what used to be the norms of American life, churches, and culture.

The press and nearly our entire elite ruling class, in academia, sports, politics, media, business, and culture are biblically illiterate and have no idea what the Jar of Nar (John 12:3) refers to; where the road to Emmaus (Luke 24: 13-35) led or who travelled on it; or even what happened in the garden of Gethsemane (Matthew 26: 36-46).

Let me brief them on the context, content, and significance of the “full armor of God,” which are, of course, the words of St. Paul, found in Ephesians 6: 10-18. Yes, that is a book in the New Testament.

Paul, formerly Saul, was a Hellenized Jew and a Pharisee who converted to Christianity on the road to Damascus. This turning point in his life totally transformed him from a persecutor of Jesus’ followers into Christ’s primary missionary throughout all of Asia Minor. In the Acts of the Apostles and various letters to the churches of the ancient world—which are critical parts of the Bible—he inspired and offered sacred words of God.

The full armor of God that Christians are called upon to wear comprises: the belt of truth, the breastplate of righteousness, the gospel of peace, the shield of faith, the helmet of salvation, and the sword of the spirit.

This armor of God is a metaphor that Paul (and now DeSantis) used to remind Christians about the spiritual battle they confront. It describes the protection the Lord makes available to be strong, to share his mighty powers, and to take a stand against the devilish schemes and temptations of this world.

The struggle Paul reminds us of is not against flesh and blood but against the rulers, against the authorities, against the powers and principalities of this dark world and against the spiritual forces of evil in the heavenly realms. DeSantis knows his enemies and they are already after him as an heir apparent to Trump.

By suiting up, so to speak, we can, like the governor of Florida, with much prayer and practice, implement the habits of God. What then exactly are these pieces of armor? I am sure the press is curious and dumbfounded when Christians—Catholics, Protestants, Evangelicals, Charismatics, Mormons, and the Orthodox branches—use such language, which is their long tradition. I will explain.

The Belt Of Truth

The first and central piece of armor is the belt of truth. It is, by its very definition, what is true and therefore—not false. Every other piece of armor is attached to truth. We live in a constant battle of truth and light against falsehood and darkness. We need to cover ourselves in God’s word—His truth, not man’s lies and ideologies.

The Breastplate Of Righteousness

As a gift of God righteousness protects believers from sinful entanglements. It gives the heart of God. Obedience is the way of the Lord and this breastplate, when in place, provides that protection.

The Gospel Of Peace

Peace is an attribute of the Lord’s very person. In Greek it means a whole character. The Gospels, which brought “good news” also bring forgiveness and access to God through faith in Christ. The result of that faith is a deep and abiding peace. Paul in his various letters constantly reminds believers, often in travail and under persecution, to “stand firm.”

The Shield Of Faith

Taking up the shield of faith refers to the Roman soldiers’ shields dipped in water to extinguish fiery darts. The Christian shield is dipped in the water of God’s holy word. It is replenished and made real by hearing and doing the word of God. Faith is increased when tested.

The Helmet Of Salvation

Salvation is a helmet that comes from trust in the death and resurrection of Christ. It is also realized as a long and slow process of sanctification. The battlefield of the mind is the primary place where the spiritual battle is fought. As Romans 12:2 says, “Do not conform to the pattern of this world but be transformed by the renewing of your mind. Then you will be able to test and approve what God’s will is—his good, pleasing, and perfect will.”

The Sword Of The Spirit

This last piece of armor is God’s word itself. It is both offensive and defensive. When tempted by Satan, like Jesus in the desert, followers can find solace and comfort but just as critical, spiritual power, by using this weapon.

The press can now realize how strange and distant this all seems to their radically secular, liberal, atheist minds. This is why they hate devout believers like DeSantis, and conservatives generally. While they make noises about freedom of conscience, in fact, the Left wants the world rid of this and all theological content. For them there is no transcendence and only the material life of the flesh. It scares the hell out of them—and well it should.

In the face of foreign enemies who want to kill or enslave us, the full armor is the key differentiator between America and her communist adversaries. In these times of decadent and predatory cultures of death—from rap music to film to unlawful behavior and abortion on demand—the full armor is the alternative along with the civilized and ordered life, realized in America’s founding and faithfully lived for generations by her people.

In this unprecedented period of continual falsehoods against America—alleging its role in the world as a racist, rogue power—the full armor is the defense of faithful everyday Americans who are besieged and attacked. In our era of leftist politicians engaged in constant deception and pure evil, the full armor is the remnant of a believing past and a call to a better and faithful future. It is the spiritual essence of—making America great again.

Is there any reason why the detractors of DeSantis wouldn’t absolutely fear the full armor of God?

Theodore Roosevelt Malloch, scholar-diplomat-strategist, is CEO of the thought leadership firm The Roosevelt Group. He is the author of 18 books, including, The Plot to Destroy Trump and, with Felipe J. Cuello, Trump’s World: GEO DEUS. He appears regularly in the media, as a keynote speaker, and on television around the world. This article appeared in American Greatness.

The featured image shows an allegory of the miles christianus, from the Summa Vitiorum by William Peraldus, mid 13th century.