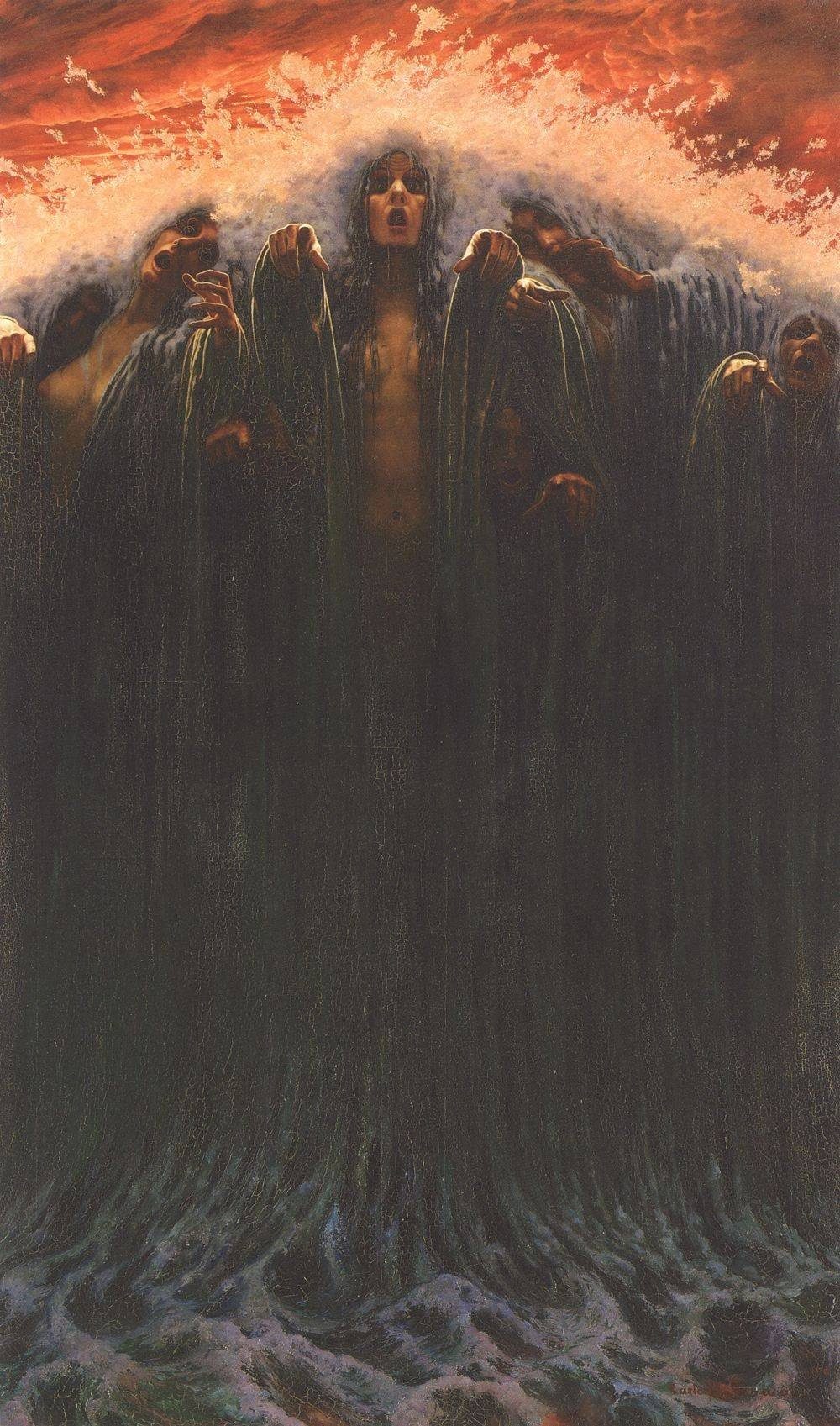 In 1986 the Billy Graham Evangelistic Association organized a conference in Amsterdam which brought together over 9000 people who came to learn how to present the Gospel in Billy Graham style to those around them, most of them from Third World countries. By all accounts, it was a resounding success in accomplishing the goals it set for itself.

And outside a large hotel adjacent to where the conference was being held sat the fundamentalist preacher Carl McIntyre, by then just over eighty years old, who had set up a booth to denounce Billy Graham and the conference. He was both uninvited and unwelcome, but perhaps not unexpected: he had been denouncing Graham for years for his disreputable practice of working with mainline Protestants, Roman Catholics, and (horrors!) Russian Orthodox, and had a habit of picketing and railing against those with whom he disagreed. (He had similarly picketed another such Billy Graham conference years earlier in Berlin).

Those with whom McIntyre disagreed formed a long list, including Pentecostals and the National Association of Evangelicals, which he considered dangerously apostate because they did not separate themselves from all non-fundamentalists.

McIntyre was nothing if not interesting. He suggested that a full-scale version of the Jerusalem Temple be built in Florida, and that Noah’s Ark be rebuilt and floated as a tourist attraction—the latter, he said, “would forever down these liberals”. His presence at the Amsterdam conference was like a zit on a teen-aged face—unsightly, embarrassing, but ultimately not significant. And like zits, McIntyre would fade away, which he did in 2002 at the age of 95.

I mention this historical curiosity to offer the decades’ long angry indignation and self-righteous rage of Carl McIntyre as a kind of cautionary tale. McIntyre was (absurdly) irate at Billy Graham. Other people can be (less absurdly) irate at many things. In fact the world is stuffed to overflowing with things which can legitimately be considered wrong and causes for ire. (To be clear, I do not consider Billy Graham to be among them).

For example, one can work oneself into a triggered lather over the media’s promotion of homosexuality and the transgender movement. One can lament and lose sleep over the heretical papalism of the Phanar. One can create a full-time job for oneself bombarding the media with protest over their determined blindness to the widespread martyrdom of Christians throughout the world. One can spend all one’s time searching out, documenting, and denouncing instances of alleged White Supremacism.

One can, if one likes, take a page from McIntyre’s own playbook and rage against every Christian group that transgresses one’s own narrow definition of the true faith, forming one’s own immaculately pure church jurisdiction as an alternative. The list of things to get angry over goes on and on. But one may still ask: why bother? Why spend all your time raging against your favourite abomination so that moral indignation dominates your life? (I would ask this particularly of those on the ideological left, some of whom seem to make triggered anger a way of life, and exist in a constant state of fulmination, denouncing with name-calling everyone even slightly to the right of them).

This does not mean that one should refuse to denounce error or call a spade a spade. Christians are not called to be quietists who sit about contemplating their navels in happy hermetically-sealed solitude, refusing to interact with the world. But neither are Christians called to spend all their time raging against error as if denunciation was their main job, and as if the anger of man could indeed work the righteousness of God (notwithstanding James 1:20 to the contrary).

It is all a matter of balance. We must find a way to balance speaking the truth about error and maintaining our inner peace. If we speak what we consider to be the truth while anger fills and overflows our hearts so that we forfeit our inner peace, we have lost that balance.

The fact is that the world is a lunatic asylum—one in which the inmates are usually running the place. That is why the world is not only stuffed with errors, but with errors that are mutually exclusive. People are crazy on both the Left and the Right, and everywhere in between. All the errors are—well, erroneous, and many are quite grievous.

So\ the question is: where to start? With so many errors to choose from and with so much wrong with the world, which error should I pick as my target for denunciation? Which terrible sin should I devote all my righteous energies to combat? Globalism? White Supremacy? Phanariot papalism? Creeping ecumenism? Atheistic evolution? Maybe something having to do with the church calendar? Perhaps I should toss a coin or cast lots…

As with all questions of this kind, the apostolic Tradition and the practice of the apostles provide the answers we need. St. Paul, for example, was not shy about denouncing error when he encountered it as he did his work. But his work was not battling the errors that filled the world, but glorifying Christ and building up His Church.

Denunciation was something of a side-line—he would swat mosquitoes when they landed on him, prepared to bite, but he did not go about chasing the world’s mosquitoes. Or, to vary the metaphor, he would confront the demonic when he met it in his ministry (see Acts 16:16-18), but he did not charge about in every direction like Don Quixote tilting at windmills trying to exorcise every demon in the world. Such a task would be too great for any man—and would result in the loss of one’s peace, and possibly of one’s mind.

It is this peace that we must maintain at all costs, and we must let this peace act as arbiter in our hearts (Colossians 3:15). There is a time for everything, including for measured denunciation. But after we have spoken the truth with serenity of heart, we must return to our place, rooted in the peace of Christ. When faced with grievous error and staggering stupidity,

I am often reminded of a line in Woody Allen’s film Annie Hall. In this film, Woody’s character was talking with Annie’s younger brother Duane (played by a young Christopher Walken), who was sharing with him in detail his surreal and pathological fantasy of suicide by car crash. After a moment of silent reflection Woody’s character responded, “Well, I have to go now, Duane, because I’m due back on the planet earth.”

I sometimes feel like this when dealing with the insanities of the world. After speaking my piece, I have to go, and happily leave the insanity behind. Like Woody’s character in Annie Hall, I am due back on the planet earth. Or, to quote the more stately words of St. Paul, “What have I to do with judging outsiders?” (1 Corinthians 5:12) Like the apostle, I will speak the truth about error and sin.

But I will not let self-righteous rage eat me up, or devote my whole life to dealing with them or to anything other than glorifying the Lord and helping to build up His Church. I cannot spend all my energies going toe to toe with craziness. I am due back on a saner place—perhaps not the planet earth, but the Kingdom of God, for that Kingdom is the source of all the world’s sanity and the world’s peace.

Father Lawrence Farley serves as pastor of St. Herman’s Orthodox Church in Langley, British Columbia, Canada. He is also author of the Orthodox Bible Companion Series along with a number of other publications.