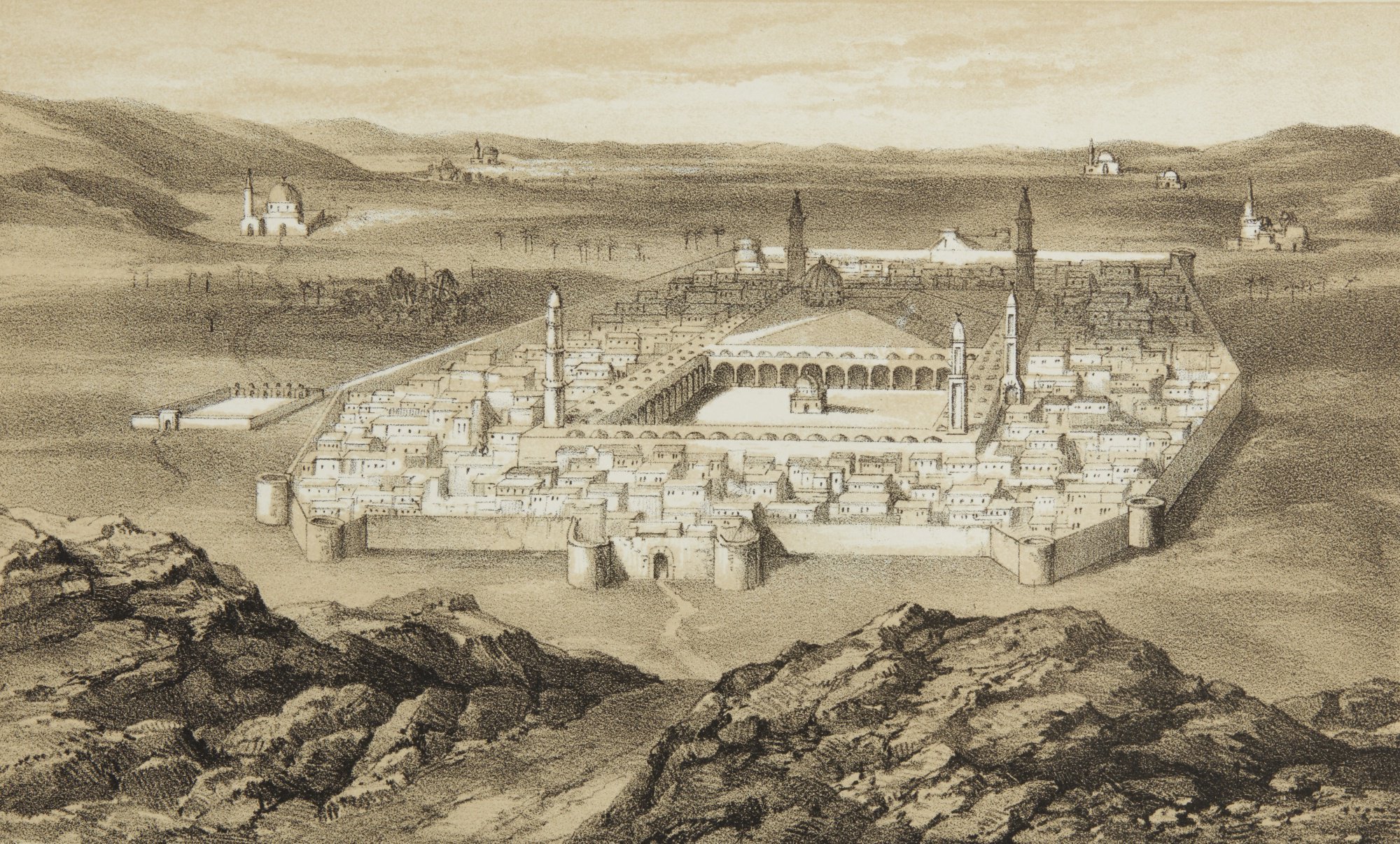 When it comes to the origins of Islam, in the popular imagination anyway, all seems to be clear. To paraphrase Ernst Renan, a French scholar of the nineteenth century, Islam was born “in the full light of history.” When, however, we look closely at the sources, a more complex and confusing picture emerges.

This applies especially with regard to the origins of the Islamic pilgrimage to the Kaʿba in Mecca, Allah’s “sacred House” (al-bayt al-ḥarām) and the activities partaken by believers. (Pilgrimage involves both the Ḥajj and the ʿUmra – note that Islamic texts are rather vague on the fusion of the ʿUmra with the Ḥajj and when it might have happened, often assuming that the latter had always included circumambulation of the Kaʿba).

In Islamic texts pertaining to these rites, there is often discomfort with regard to some of the rituals, so for example, the famous ḥadīth which has ʿUmar state his disinclination to make istilām (greeting or kissing) of the black stone of the Kaʿba is well known, and so too is al-Ghazālī’s admittance that some of the Ḥajj rituals lack obvious aesthetic pleasure or rational explanation. We also often find mention of the Hajj to ʿArafat not to the Meccan Kaʿba, which only seem to have been conflated at a later period.

In the Qur’an, according to Islam, a revelation to Muhammad, at least three passages assume that the Hajj is directed towards the bayt which, in one passage, is identified as the Kaʿba:

Taken together, these passages would seem to suggest that it is the bayt that is to be the object of Hajj, and they probably have much to do with the widely accepted idea that the Kaʿba has always been at the centre of the Ḥajj. The Kaʿba is equated with the bayt in 5:97, which states that
Allah made the Kaʿba, al-bayt al-ḥarām, as a support(qiyām) for mankind (al-nās). These passages are, even when taken together are rather vague.

Scholarship has shown that verses in the Qurʾan which allude to Abraham and the bayt are adaptations of Jewish and Christian midrash, and we know that in the Late Antique Middle East there were numerous sanctuaries associated with Abraham and where an annual festival during a specific month was celebrated.

It would therefore seem that much of the quranic material focusing on the bayt (esp. 3:97 and 22:26-29) as the focus of a festival or celebration (ḥajj) has originated with reference to a place other than the Kaʿba at Mecca, and indeed the key term ḥajj in this meaning is a borrowing from Syriac (which in turn borrowed it from the Hebrew Bible). Only later did it become attached to the Kaʿba, which was identified as Abraham’s foundation.

The material which can be gleaned from Islamic sources pertaining to the history of the Ḥajj during the early Islamic period – between the death of the Prophet and that of Ibn al-Zubayr – shows it as a symbol of religious and political authority, but does not suggest any way in which it might have been connected with Muḥammad or Abraham.

The legitimate question in light of the evidence available, or the lack thereof, is whether the Prophet ever took part in the Ḥajj? Before the Prophet’s “Farewell Pilgrimage” (ḥijjat al-wadāʿ) we have no real evidence, and it should be noted that there are many variant reports about the Farewell Pilgrimage, and it is clear that over time these underwent considerable literary amplification.

One might be tempted to envisage a development that was begun by the Prophet and still in formation in 72 AH (Ibn az-Zubayr), although this does seem rather far-fetched by all accounts. The attention the sources give to the re-building of the Kaʿba by Ibn al-Zubayr, and to the alterations made to its form, seem at odds with the sense of continuity in its history that Muslim tradition generally seeks to present.

Based on the available Islamic sources relating to the period between the death of the Prophet and the fitna of Ibn al-Zubayr, it is hard to make the case that the Ḥajj was focussed on, or even associated with, the Kaʿba, which is not mentioned as frequently as one might have expected, and based on the same evidence, one is even led to call into question the historicity of the traditional accounts of the Farewell Pilgrimage.

Apart from al-Yaʿqūbī’s report about ʿAbd al-Malik’s designs regarding the Dome of the Rock, it is rarely, if ever, clearly stated that the Ḥajj involved visiting the Kaʿba. Depending on our attitude to the reliability of the reports, we might conclude that the Meccan sanctuary was a building of some religious importance, possibly associated with an anachronistic notion that the Prophet may once have prayed inside, and that when people came to Mecca for the Ḥajj they may have visited it.

Nonetheless, Muslim tradition on the Meccan sanctuary before Ibn al-Zubayr’s construction work really makes no mention of the site’s Abrahamic associations. It is well known that Ibn al-Zubayr justified his rebuilding by an appeal to the alleged wishes of the Prophet and by the claim that he was restoring the building as per the original foundations laid down by Abraham. It is rather unclear why that should have been necessary at the time, but the tradition gives the impression that an
inappropriate, or at least an imperfect, jāhilī structure was to be replaced with a properly Islamic (i.e. Muḥammadan and Abrahamic) one.

At this point, we should ask ourselves a few pertinent questions.

What is a Kaʿba and is it unique?

As was noted, there were numerous contemporary shrines dedicated to Abraham:

Traditionally, the term Kaʿba is taken to mean “cube”, vis-à-vis the present shape of the Meccan sanctuary (cf. the root’s quadratic semantics in modern Arabic, which are later and derived from the Islamic shrine).

In Epiphanius’ Panarion, we find a reference to the mother of the Nabatean God Dusares ( ذو الشرى – dhu al-sharaa) as Χααβου or Chaabou, because, like Mary, she was a virgin. Now then, both mother and son were widely venerated by both Arabs and other Semitic peoples in antiquity, hence the numerous shrines attested in literature.

A Kaʿba then, a shrine dedicated to this goddess (and her son), is analogous to the Parthenon, i.e. a building dedicated to a virgin goddess (or the many Christian Churches named after “our Lady”, a pre-Christian appellation for a goddess). What though does any of this have to do with Abraham?

If we look at the modern Kaʿba, we might still be able to find some clues. To the North-West of the structure, we find a low-standing semi-circular wall which is part of the sacred precinct (around which the Tawaf is performed), called الحطيم (āl-ḥaṭim ,“something destroyed”?), in which we find the ,حجر إسماعيل (ḥiǧr Ismāʿil, traditionally seen as Ismael’s grave; outside thereof we find that of Hagar.

Now in Islam, like in Judaism, there is a taboo on corpses, unlike in Christianity in which churches once needed to contain the relics or to be built on the grave of a martyr or biblical figure (especially since St Helena, Constantine’s mother). The fact that the only two people allegedly buried in an Islamic shrine are buried in المسجد الحرام (al-masjid al-haram, the Grand Mosque) is surprising at least.

It is clear that the Arabs traced their lineage to Abraham through Ismael, not an indigenous tradition, but one developed by Josephus and later amplified by Church Fathers, especially Saint Jerome. In the fifth century, we see that this is used to convert pagan Arabs, i.e., by converting to Christianity they might be able to reclaim their birthright – Ismael was Abraham’s firstborn, and present when God made His covenant with him.

For Arab and Semitic Christians especially, who rejected Pauline soteriology, and who saw in the person of Jesus a human prophet who did not repudiate the Law, Abraham and Ishmael were important. Some insight in this longstanding theological debate, which also sheds some light on traditions that would go on to become incorporated in Islam, can be found in Galatians chapters 3-4, esp. 4:21ff. The Arabs of the seventh century, who rejected Chalcedonian Christology, saw themselves as both the spiritual
and biological heirs of Abraham through his son Ismael.

As was noted in the preceding, we find no real evidence for Mecca as the site of the Ḥajj before Ibn az-Zubayr. As noted, he rebuilt the sanctuary, allegedly according to its original intent or design. At the same time, the criticism brought to bear in (later!) Islamic texts against his contemporary and adversary, ʿAbd el-Malik, was that the latter allegedly diverted the pilgrimage from Mecca to Jerusalem.

However, these texts leave one with the impression that later authors knew of the Umayyad pilgrimage to Jerusalem – but did not understand that Mecca only gained primary significance later. There do not seem to be traditions about the Umayyads being connected to Mecca – and therefore later authors assumed that they had rerouted the Ḥajj. In this time there is no evidence associating Mecca with either al-’Isrā’ wal-Miʿrāj’ (which is only centuries later), nor is Jerusalem referred to as al-quds; instead, we find a realisation of the city’s Latin name Aelia.

Indeed, the Umayyads are often criticised in these later texts for being somewhat deviant vis-à-vis later Islamic orthopraxy. The disparagement is valid, simply because Islam did not yet exist in the seventh century, only in the latter half of the eighth and first half of the ninth centuries can we see what would become Islam slowly emerging in the Abbasid capital Baghdad.

In the preceding, we have noted that the Qur’an makes no specific mention to the Ḥajj at the Meccan Kaʿba. Furthermore, Muhammad’s association herewith is spurious at best. Indeed, before Ibn az-Zubayr, during the second Fitna, we have no real tangible evidence, and by all accounts, there was a major Ḥajj to Jerusalem, hardly surprising for a monotheistic “Abrahamic” religion.

It would though seem that Mecca was also one of the many pilgrimage sites devoted to Abraham, especially in relation to the veneration of his son Ismael, and was frequented especially by Arab believers, who saw themselves as Abraham’s biological and spiritual heirs through Ismael (whose firstborn Nebaioth, Genesis 25:13, is sometimes seen as the progenitor of the Nabateans).

Originally the Kaʿba at Mecca though, in pre-Christian times, was dedicated to the Semitic deity Dusares and his mother Kaabou, who was actually a sacred stone (a Baetylus, i.e. beth-’el the dwelling of (a) god, بيت الله – bayt allah). That cult sites were repurposed and adapted to new religious realities (“under new management”), needs no further explanation.

By all accounts, Ibn az-Zubayr, in the power struggle of the latter seventh century, a civil war among various Arab factions, for hegemony over an Arabic Empire (Islamic is an anachronism), chose as his site, Mecca, which must have had considerable longstanding cultic significance for the Arabs. After his demise, this site was understandably given preference over Jerusalem and incorporated over time into the primary sanctuary of what would later become Islam.

Professor Dr. Robert M. Kerr studied Classics and Semitics largely in Vancouver, Tübingen and Leyden. He is currently director of the Inârah Institute, for research on Early Islamic History and the Qur’an in Saarbrücken (Germany).

The image shows an illustration of Mecca by Sir Francis Burton, the famed soldier, linguist, scholar, explorer, discoverer, poet and author, from his book, Personal Narrative of a Pilgrimage to Al-Madinah and Meccah, published in 1855-1856.