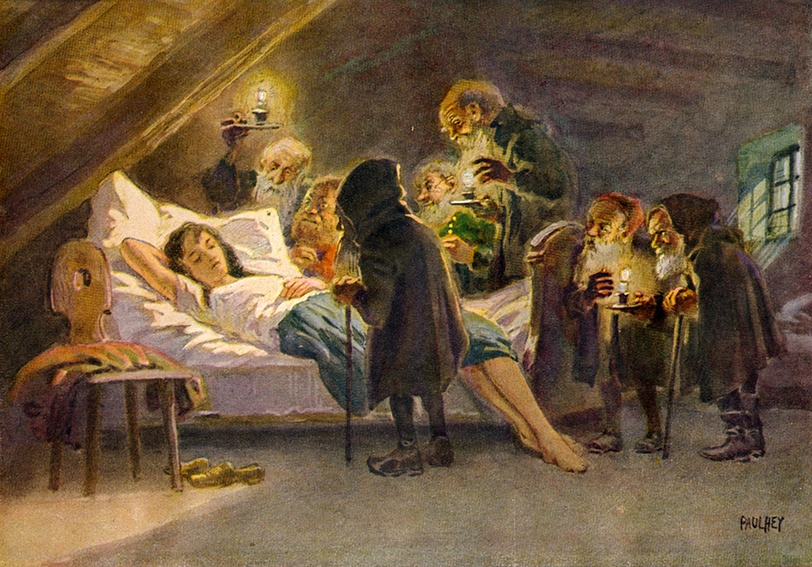 Once upon a time, in a place not so far away, a black shadow spread across the land, slipping its long, inky fingers into every castle and cottage. Like a Midas of misery, everything it touched turned to wrack and ruin.

Children starved, mothers lay ill, fathers slain in battle, crops destroyed, houses burned. Nothing the people did could spare them from the evil and pestilence, and many believed the end of the world had come.

That time was the early 17th century. That place, Germany; and that shadow of darkness and destruction, the Thirty Years War. Yet, this bleak epoch gave rise to the fairy tale, a genre of fiction, which modern readers immediately associate with innocent enjoyment and far-fetched fantasy.

And the tales of the Brothers Grimm are a grim collection of tales that embody the harsh realities of life such as death, but also the bonds that make life sweet, namely, love. Thus, the tales of Brothers Grimm move between these two eternal themes.

No place on the Continent was ravaged as brutally as Germany during the three ruinous decades collectively known as the Thirty Years War (1618-1648), which cut a broad swath of disease, death and demoralization through the country.

One-third of the German population was dead, leaving the survivors without parents, offspring, homes, livelihoods, health, hence the harshness with which the Grimm tales unfold.

Fairy tales of the period reflect the uncertainty and staggering losses of war. Rampaging disease – the worst Europe had seen since the Black Death of the 13th century – brought with it the reality of wicked stepparents and -siblings (Cinderella), hunger and life-threatening poverty (Hansel and Gretel), and early death (Sleeping Beauty).

Theft, abduction, mutilation, and murder are common themes in the Brothers Grimm, from Rotkäppchen to Rumpelstilzchen – hardly our idea of child-appropriate entertainment, but story tellers of the day were more occupied with keeping their children clothed and fed than making good citizens of them.

Society generally regarded children as small adults, unlikely to survive to actual adulthood, and therefore took little care to coddle their emotional development. Fairy tales were intended to amuse parents as much as offspring, and the harshness of life is not clothed in sentimentality or euphemism.

The Brothers Grimm, Jacob (1785-1863) and Wilhelm (1786-1859), set about to produce a comprehensive printed version of European fairy tales, with an eye to adapting them for a younger audience. That we now refer to Snow White and Cinderella as “Grimm’s fairy tales” attests to the personal stamp they left on this hitherto collective cultural property.

They also made a significant contribution to the shaping of the genre by naming their collection, Kinder- und Hausmärchen (1812) and redirecting the tales towards a – physically – smaller audience. Their work has gone on to become the single most translated German book throughout the world.

By today’s standards, even the Grimms’ fairy tales are brutal. If you grew up thinking Cinderella’s prince came around after the ball, blithely passing that left-behind slipper from one genteel foot to the next in search of its rightful owner, it may surprise you to read the version in circulation circa 1820.

The self-absorbed step-mother, keen on winning the reflected glories of royalty by marrying off her daughters to the eligible heir, cuts off part of each girl’s foot in order to get a proper fit and triumphantly jams on the shoe.

Both times the (apparently blind) prince rides off with the bleeding bride-to-be, saved from his mistake only a by a few helpful birds who clue the prince in to what has happened. The gore goes on in Snow White, where the wicked Queen summons a huntsman not merely to kill the young beauty, but to tear out her lungs and liver as well.

The Queen then boils this bounty and devours it with fiendish enjoyment. Rapunzel’s handsome rescuer also meets a nasty end. After his eyes are gorged out, his body, too, is pierced by the giant thorns, which flourish on the rose bushes surrounding poor Rapunzel’s tower.

Grimm’s fairy tales speak universally and directly to children in a way, which empowers and delights, terrifies and tickles, enabling children to recognize themselves and their place in the world. As Märchen scholar Max Luthi has noted, fairy tales draw in readers and listeners of all ages because they present the world in miniature.

The blossom of love and the thorn of death, the proverbial battle between good and evil, are presented in a form, which fits within the span of a bedtime story. Objects such as gold, water, iron and straw symbolize power, purity, strength, and industry.

Fairy tales reflect the hard injustices and grinding poverty of peasant life along with the rarefied, but no less suffocating limitations of royal existence. Dreary toil, illness, and hunger are as much a part of fairy tales as kissing frogs and spinning straw into gold.

The realm of dreams is represented by abundant food (Tischlein deck dich), luxuries such as soft beds and warmth (Hansel and Gretel) and wealth in the form of jewels and gold. The fairytale reached the zenith of its popularity in the mid-to-late 19th century, when Gothic revivalism swept the Continent. The tales spread from page to stage, be it puppet theater or grand opera (Humperdinck’s Hänsel und Gretel was first produced in 1893).

Allegorically, children are presented with a first glimpse of the wide world beyond their bedroom walls. Fairy tale princes and paupers all tread the same path to adulthood, overcoming fears, resolving conflicts, and building friendships.

By confronting evil in the form of granny-devouring wolves or witches who roast children, children can explore the vivid fantasy side of fear. Wicked stepmothers, jealous siblings, and lost fathers are more realistic worries, which children confront through fairy tales.

Coming to terms with these anxieties emboldens children to master their fears, bringing them closer to adulthood, when they will close the circle and pass the magic onto their own children.

Thus the theme of love and death in the works of the Brothers Grimm derive from the harsh realities of the seventeenth in Germany, during the Thirty Years War.

The catalog of death and harshness that appears in these fairy tales is an account of the evil that is found in the world. Yet, despite this grim reality, there is love, which triumphs despite adversity, for Cinderella does marry her handsome prince.