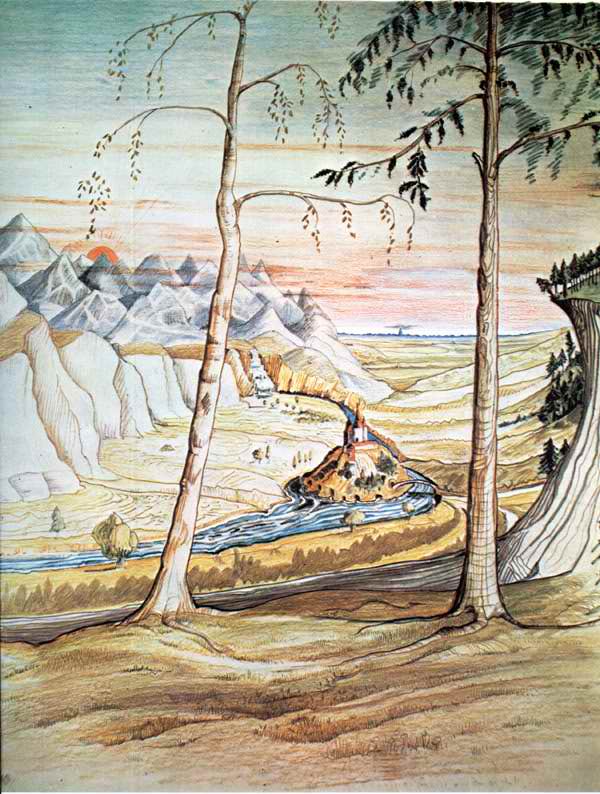 It shall come as a surprise to no one that I am a great fan of J.R.R. Tolkien’s work. Having discovered The Lord of the Rings in Junior High (thanks in no small part to having been introduced to C.S. Lewis’ The Chronicles of Narnia in 6th grade), I have written and spoken about the books for nigh on to thirty years. I have read them quite a few times — and yet they are always good to return to; familiar as they are, I always find something new. That is the mark of truly good literature — as you grow, so does it.

Tolkien himself was an interesting man. Forget the recent biopic. Born in South Africa and raised at the Birmingham Oratory, his Catholic faith was tested in the trenches of World War I (which killed all but one of his closest friends). Not even the jibing of fellow Oxford dons could weaken it. For that matter, the brilliance of Oxford in his time is breathtaking.

One would have loved to have been present to hear him, Lewis, Charles Williams, Owen Barfield, and the other Inklings at the Eagle and Child or the Lamb and Flag. Pipe smoke, liquor and tale-telling — it all seems in this parlous time of ours, rather warm and cosy.

“Seems,” however, is the appropriate word, for it was anything but. These were men who — if they had not been in the trenches, and most of them had — had surely lost loved ones there. I am old enough to have known many people who were alive and functioning before 1914; all report the supreme trauma of finding out what humanity could descend to — by contrast, World War II was just more and worse.

Do not forget that when the Inklings were at their height, that Second War was in full bloom, and Britain receiving the Blitz and rationing — with the threat of invasion looming. Behind the threat of Hitler loomed that of Stalin. So the Inklings were creating with a possible death sentence over their heads — and were fully aware of what that meant. They did not live in a sort of never-never land where bad things did not happen.

Because of the times in which we live, we forget that — in either Church, State, or both — our predecessors went through such things in various ways. Tolkien, scholar of history that he was, knew that these things are part of the human condition, and that almost every generation has to face them.

In an often quoted letter, Tolkien declared “Actually, I am a Christian, and indeed a Roman Catholic, so that I do not expect ‘history’ to be anything but a ‘long defeat’ — though it contains (and in a legend may contain more clearly and movingly) some samples or glimpses of final victory.”

Indeed, his history of Middle Earth has many motifs that might have been lifted from various chapters of real European history, and recast.

Certainly the Numenoreans start out much like the Chosen People of the Old Testament; when their sinfulness causes Numenor to sink like Lost Atlantis, the faithful remnant establish Kingdoms in Middle Earth: Arnor in the north, and Gondor in the south.

As with the Western and Eastern Roman Empires, Arnor is obliterated — save as an idea — but Gondor survives, albeit diminished — as with the later Byzantine Empire; its capital of Minas Tirith could well be Constantinople. But the idea of the Kingdom survives in the north, as had the idea of the Empire in Western Europe.

The remnant of the Arnorians — the Rangers — are like the Cavaliers, Jacobites, Carlists, or French Emigres. Their chief, Aragorn, is a bit like Bonnie Prince Charlie. Minas Tirith undergoes a siege like that of Constantinople; but then the history flips, and the siege becomes that of Vienna, with the Rohirrim blowing their horns as they ride to save the city — very like Jan Sobieski and the Poles, rescuing the city of the Kaisers.

At last, the shadow defeated, Aragorn becomes a figure such as Charlemagne might have been had he married the Byzantine Empress Irene — restorer of the united Empire. However, we are warned that the shadow shall return in some other form.

That last note has always been true in the history of Christendom; after Aetius threw Attila back at Chalons or Don Juan of Austria broke the Turks at Lepanto, always the shadow rose again.

In 1989, when the wall fell, such a time seemed imminent; but the shadow rose again, rainbow-coloured rather than red. When, in the darkness that is our history, it seems that a place for a while reflects a touch of Heavenly order on Earth, always does it fall, only to be swallowed up by the darkness from whence it came — so it was with Arthur’s Camelot, with Charlemagne’s Aix-la-Chapelle, with Habsburg Vienna.

It is left to yet another generation to rebuild what it can from the wreck bequeathed to it. Moreover, the evil wreaked by high placed traitors is well illustrated by Saruman — chief of Wizards, who is seduced by Sauron. He is a figure who pops up through history — some of us may even recognise him to-day.

But in this generally bleak picture, what sort of hope does Tolkien offer us? Lots, really. Looking about the situation we live in, one might agree with Frodo’s observation. “‘I wish it need not have happened in my time,’ said Frodo.

“‘So do I,’ said Gandalf, ‘and so do all who live to see such times. But that is not for them to decide. All we have to decide is what to do with the time that is given us.’” So he warns us well.

To sustain and protect us on our journey, Tolkien suggests both receiving the Blessed Sacrament (Lembas) and invoking the Blessed Virgin Mary (Elbereth) — which associations he makes clear in his letters. “I know exactly what you mean … by your references to Our Lady, upon which all my own small perception of beauty both in majesty and simplicity is founded.”

Of the Eucharist, in another letter he writes “Out of the darkness of my life, so much frustrated, I put before you the one great thing to love on earth: the Blessed Sacrament. . . . There you will find romance, glory, honor, fidelity, and the true way of all your loves on earth, and more than that: Death: by the divine paradox, that which ends life, and demands the surrender of all, and yet by the taste—or foretaste—of which alone can what you seek in your earthly relationships (love, faithfulness, joy) be maintained, or take on that complexion of reality, of eternal endurance, which every man’s heart desires.”

In Lord of the Rings, friendship is a paramount virtue, as it is in the darkened world through which we travel. “You can trust us to stick to you through thick and thin — to the bitter end. And you can trust us to keep any secret of yours — closer than you keep it yourself. But you cannot trust us to let you face trouble alone, and go off without a word. We are your friends, Frodo.” But this sort of friendship which Tolkien celebrates is that of which we are given the ultimate example of by Our Lord, in that “Greater love hath no man, than to lay down his life for his friends.”

Tolkien also counsels us to remember that we are basically ignorant of what is really happening. When Frodo says of Gollum that he deserves to die, Gandalf responds, “Many that live deserve death. And some that die deserve life. Can you give it to them? Then do not be too eager to deal out death in judgement. For even the very wise cannot see all ends.” When Frodo has the chance to kill Gollum, he spares him, out of pity. In the end, when Frodo fails in the quest, Gollum — for his own evil and selfish reasons, “accidentally” saves the day.

Even evil persons, places, things, and events can be used by Providence — without benefitting or being redeemed by being so used — that depends upon their own wills. And that, of course, is the biggest single theme of Lord of the Rings — the interaction between the Divine Will and countless fallen free ones.

Above all, in this world of sin and shadows through which we wander, Tolkien constantly advises us never to give up, to persevere — because ultimately, we serve a cause far above and beyond this muck we face. “There, peeping among the cloud-wrack above a dark tor high up in the mountains, Sam saw a white star twinkle for a while. The beauty of it smote his heart, as he looked up out of the forsaken land, and hope returned to him. For like a shaft, clear and cold, the thought pierced him that in the end the Shadow was only a small and passing thing: there was light and high beauty for ever beyond its reach.”

Tolkien’s mind was filled — as any honest Medievalist’s must be — with the beauties of England, and indeed Europe in Catholic days. Oxford is a particularly easy place in which to conjure them up in one’s mind.

There were schoolmen like Roger Bacon and Robert Grosseteste in the Middle Ages; Charles I made it his capital during the Wars of the Three Kingdoms, and Recusants and Jacobites abounded in Oxford and the surrounding county.

This was where the Oxford Movement started; Anglo-Catholicism may be said to have made its greatest achievement in the Ordinariates. During the Catholic Revival in the 19th and early 20th centuries, the Jesuits made their home there, while the Benedictines, Dominicans, and Franciscans all returned. All of this produced the background against which the Inklings (and their friends, such as Dorothy Sayers) shone.

To-day, of course, Oxford is quite different; the same enfeeblement of will and intellect that infects academia in these United States is universal throughout the West. But just as a beautiful church with horrible liturgy insistently reminds the worshipper of what has been — and so could be again — so it is with Oxford.

And there an effort has been launched for Tolkien’s canonisation. Last year, the first Mass for that intention was offered at the Oxford Oratory — the former Jesuit church, where Fr. Gerard Manley Hopkins was once assigned, and Fr. Leonard Feeney studied and preached. Whether or not Tolkien was a Saint, the Church must decide one day.

But what is certain is that — using the medium of fantasy — he gave us a remarkable tool for negotiating some of the spiritual pitfalls of real life.

Mr. Coulombe serves as Western U.S. Delegate of the Grand Council of the U.K.-based International Monarchist League, and is a member of both the Catholic Writer’s Guild of Great Britain (the Keys) and the Royal Stuart Society. Mr. Coulombe is also a founding board member of the Los Angeles-based Queen of Angels Foundation, a Catholic devotional society.

The photo shows, “Tol Sirion,” a drawing by J.R.R. Tolkien.