Christmas, being the time of joyful celebration for the birth of the Messiah, leads also to meditation and reflection.

For some, it may involve a reevaluation of what was, or was not, accomplished. For others it might be a prayer and wish that the coming year may be a better one. For others still, there may just be full contentment for hopes fulfilled.

But this Christmas season, as 2017 wends its way into history, we might also reflect on who and what we are, what we have become. That we might consider the life of our civilization, because of which we live as we want.

Are we good stewards of our civilization? Do we know how to husband and sustain it? Or do we think things will look after themselves as they always do, why worry? We might think that life just keeps getting better, and everything is wonderful.

How we ought to live, and how we actually do spend our time tend to be miles apart. This isn’t some trite lecture on efficiency, or worse a feel-good pep-talk on fulfilling goals and then setting new ones. The world is too full already of all that saccharine advice.

Perhaps this Christmas, we might consider the life of our civilization – where is it headed, what are we doing in it, why does any of this matter?

Recently, I was rereading the work of the Italian philosopher, Marcello Pera. One book in particular needs to be read more widely by all those who still value the civilization of the West.

In the coming years ahead, what we still call the West will be near collapse – not because of foreign enemies, but because of apathy and apostasy of those of us who still want to enjoy the fruits of the West, without thinking how the tree that keeps on giving may be cared for and protected that it might continue to give us and our future generations the fruits that we now take for granted.

“By their fruits shall ye know them,” is a good starting.

Right now, the West is at a crossroad (some may say that it’s already too late and we’ve veered into the wrong, destructive path).

But perhaps the choice is still to be made.

Shall we, as a civilization, take the broad gate that leads to destruction, because it’s a lot easier and we’re complacent and can’t be bothered?

Or, do we take the narrow gate, which is difficult and leads to much hardship, but which will lead us to redemption?

As in most things in life, there are only ever two choices. Never more – good or evil.

Likewise, we as a civilization have two choices – naturalism, or Christianity – evil or good.

All the grand promises of a technological civilization, grounded in atheism and secularism, are merely siren songs, which can harbor nothing but destruction. The Jacobins tried to build such a civilization in France after 1789. The result was relentless cruelty. Indeed, why should a rational man be kind, when kindness is deemed a flaw and then as weakness?

And what have been the fruits of naturalism? The National Razor (what the Jacobins called the guillotine), Gulags, concentration camps, the murderous “leap forward” of the Moaists, the killing fields of Cambodia, the slaughter of “revolution” in Cuba and South America.

And the fruits of Christianity? The very values and ideas we hold to be fundamental to our way of life: kindness, goodness, charity and love.

Christianity is only hated when grand lies are fashioned about it, and then ceaselessly repeated until they settle in the minds of the hapless as obvious and absolute “truths.”

But in the words of Marcel Mauss, ““Our own notion of the human person is still basically the Christian one.”

In other words, the West may try, but it cannot hide the fact that it is fully – and only – a Christian civilization.

Many try to deny this fact and try to cobble together some sort of culture without Christianity. But this can only fashion some sort of tyranny, for how can you have morality through atheism? And then how can you actually create a civilization without morality?

More importantly, without morality, human life is impossible, because people need love, goodness, charity. There is no life without it – just bestial existence.

And the morality of the West is Christianity. Without it, it’s dead.

Here the words of Simone Weill bear recalling: “…how can bring oneself to love anything other than the good?” This is essential definition of civilization. Only Christianity offers both the love and the good.

Marcello Pera explores this theme fully in his fascinating book, Why We Should Call Ourselves Christians. The Religious Roots of Free Societies. Even though this book 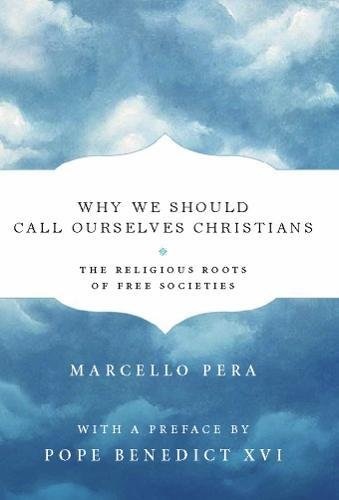 came out in 2011, it is worth revisiting, because it has much to teach us, since the tension between Christianity and naturalism is only accelerating.

The answer to this question is clear enough – the West is the production of only one religion – and none other – Christianity.

It is because of Christianity that the West came to dominate the world. Why? Because Christianity gave it liberty, democracy, human dignity, charity, non-violence, love of others, individualism, equality before the law, education for all.

No other culture in the world was able to produce these universal virtues. Why not? Because they were not Christian.

These ideas spurred the West to advance morally, socially, economically, and politically far beyond other nations.

However, these ideas have gradually been detached from their Christian context and given a secular framework – what philosophers commonly call, “naturalism” (there is no God, no afterlife, and humans are simply another type of animal that has won dominance of the planet).

Naturalism is so deeply entrenched in the West that it is taken to be its default worldview.

Because of this pervasive attitude, Christianity is blamed and ridiculed as “unreasonable,” “unscientific”, “unprogressive,” and far worse.

These negative definitions of Christianity have led to open hostility, because it alone stands in the way of the positively defined qualities of naturalism.

But who is doing all this defining? That’s the question citizens of the West should be asking? Why are their politicians openly encouraging civilizational suicide?

Further, naturalism is allied with relativism which denies comparison of cultures, religions, worldviews – so that we can never say one religion, or even culture, is better than another.

And yet in a direct contradiction to all this, those that profess such relativism, then proceed to hold up ideas, such as, equality for women, individual freedom, and charity for all. They do not, or cannot, explain why these values are better in themselves – or why they are good for all.

Pera then presents a counter-argument: “Christianity has changed the world…it has brought about an unprecedented moral revolution of love, equality, and dignity, whose effects are still at work today…had this revolution never occurred, the world would be more savage…Christianity is of great value…it is a good unto itself.”

Still the West is intent on emptying itself of its history and culture – its Christianity – in order to build a new society that will be truly secular.

The signs of this “new society,” this “new social order” are already apparent: Limitless consumption, blind hedonism, distraction and entertainment through technology – and worst of all, the replacement of ideas with agitprop, the weaponization of sexuality, the control of language, the denial of free expression via the phantom of “hate speech,” the destruction of education until it is now indoctrination.

And naturalism is fueled by the credo: Pleasure is good; its denial is evil. The West will implode because of it.

Strangely, the most ardent upholders of naturalism are the courts. Pera explains: “The bench and high courts, in order to enhance their own influence and transform themselves into an absolute authority, have even come up with a theory…according to which the task of judges is not to interpret and apply specific laws but to enforce general principles.”

In this way, controversial practices (such as abortion, same-sex marriages, euthanasia, polygamy, the erosion of bio- medical and scientific ethics and now the rise of digisexuality are normalized, not by the will of the people expressed, say, in plebiscites – but by court rulings.

This is “judicial imperialism,” that is, judicial dictatorship, where courts are permitted to enforce ideology rather than implement the laws of the land.

They do this, because citizens of the West are now incapable of expressing any kind of a collective moral voice – they are confused by the constant legitimation of personal desires as “rights.”

Such is the West today – rootless, amoral, free-floating, empty of all historical and cultural content; intent on pleasure.

It is any wonder that internationalism is held up as an ideal, while patriotism is decried as “racism” and “hate speech?” This really is the old language of Communism – and hardly disguised. It works because people have no history whatsoever any more.

But Pera points to a solution: “If we live as Christians, we will be wiser and more aware of the dangers we face. We will not separate morality from truth. We will not confuse moral autonomy with any free choice. We will not treat individuals, whether the unborn or the dying, as things. We will not allow all desires to be transformed into rights. We will not confine reason within the boundaries of science. Nor will we feel alone in a society of strangers or oppressed by a state that appropriates us because we no longer know how to guide ourselves.”

The revolutionary Christian message needs to be bravely declared by citizens of the West who still remain Christians so that politicians will listen.

The churches that are hand-in-glove to Statism need to be destroyed (like the church of Sweden that has banned the words, “God,” “Lord,” “Father” which means the theological concept of Divine Fatherhood is deemed to be “hate speech. Thus, in the end, all heresies verge in madness). When the spirit of truth departs, so must the people.

Naturalism creates, promotes and celebrates such lunacy. Christians in the West need to wake up before they’re sucked into the spreading maelstrom (to use a Swedish word).

Only Christians can save the West from the Hell envisioned by naturalism. This is Grand Crusade of the 21st-century. We need a return of Christian manliness to even face it, let alone overcome it.

Pera’s book is a much-needed wake-up call. It should be essential reading for all who want to align western societies once more to the truth of democracy – which is Christianity.

Naturalism can only offer Gulags, concentration camps, and killing fields. Will Christians recoup their moral courage? Or will they succumb because of theur apathy? That is the stark choice that now lies ahead.