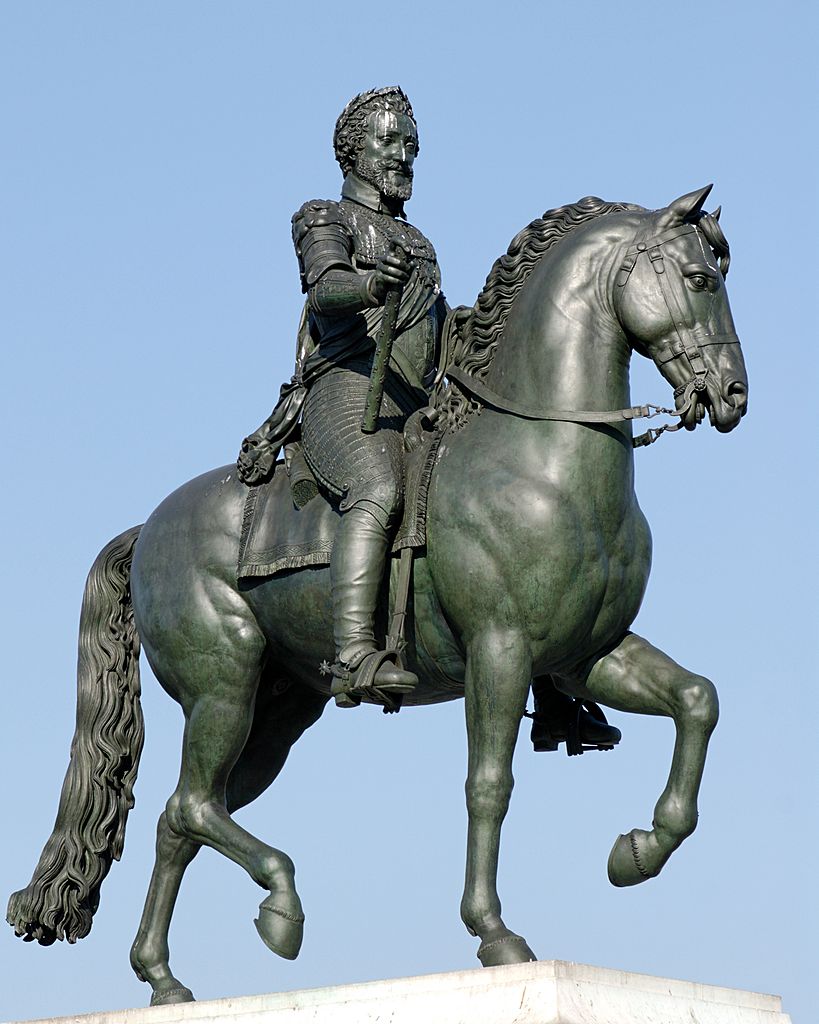 [This Ode was written by Victor Hugo when he was seventeen years of age, in 1819. It won the Golden Lily award from the Academy of Toulouse. It is a youthful work, but which nevertheless shows the literary direction of his mature years – history, and political and social commentary, as seen in such novels as The Notre Dame of Paris, or The Hunchback of Notre Dame, Les Misérables, and The Man Who Laughs. Hugo is not known for his poetry in the English-speaking world, but in France he is held to be a better poet than novelist. The subject of this Ode is the installation of a new statue of Henry IV on the Pont Neuf, in Paris, in 1818. The original statue, which had stood there since 1614, was toppled and completely destroyed by revolutionary mobs in 1792].

Awarded the Prize of the Golden Lily,
offered by the Academy, to Victor-Marie Hugo.

Ode on the Re-Installation of the Statue of Henry IV

Accingunt omnes operi, pedibusque rotarum
Subjiciunt lapsus, et stuppea vincula collo
Intendunt… Pueri innuptæque puellæ
Sacra canunt, funemque manu contingere gaudent.
(Then they all girded themselves for the work; and so, to its feet
They fixed rolling wheels, and around its neck coarse flaxen lashings
They tied… Young lads and also unwedded maidens
Sang sacred songs, and gladly then their hands seized up the ropes).
[Virgil, Aeneid, II. 235-237a; 238b-239].

I saw rising, in the far distance of ages,
Great monuments – hope of a hundred gloried kings;
Then I saw crumble, the fragile images
Of all those fragile half-god kings.
Alexander, a fisher by Piraeus’ shore
Tramps upon your statue, ignored
On cobbles of the Parthenon;
And the very first rays of the nascent dayspring
In vain, in the desert, continue questioning
The mute, hushed debris of Memnon.

Did they imagine, in their minds superb and shrewd
That inanimate bronze would make them immortal?
Perchance tomorrow time will have hid ‘neath the sward
Their high altars all notional.
The outcast behindhand may replace the idol;
Pedestals of the Capitol,
Sylla dethroning Marius.
The ravages of fate to those who oppose this!
The sage, whose gaze made tremble Theodosius,
Smiles along with Demetrius.

And yet, a hero’s image, august and dear,
Derives respect which is given for his virtues;
Trajan yet dominates the fields by the Tiber
That now cover fallen temples.
And when oft in horror of civil disorder
Over the cities hung terror,
Midst cries of people rebellious,
A hero, in mute marble, who was yet breathing,
Suddenly halted, with a gaze that was calming,
The enraged, frightened and factious.

Are they so far gone, days of our history,
That Paris, on its prince, would dare to raise its hand?
That Henry’s visage, his virtues, his memory,
Could not the ungrateful disband?
What can I say? They destroyed his statue adored.
Alas! That lost and wild-eyed horde
Mutilated the fallen brass;
And more, defiling the holy shrine to the dead,
For clay, their sacrilegious hands then demanded,
To smear his forehead, cold as ice!

Did they just want to have a portrait more faithful
Of the hero, to whom their hatred gave avail?
Did they want, heedless of fury most criminal,
Just to make it more genial?
No, for it was not enough to break his image;
They came again, in their rage,
To splinter his casket defiled.
Just as, with a grim roar that vexes the wasteland,
The tiger, in sport, seeks to gulp down the shadow
Of the cadaver he just gnawed.

Sitting then by the Seine, in my bitter anguish,
I said to myself: “The Seine yet waters Ivry,
And, as in our fathers’ day, its waves still gush
Whence was cast the face of Henry.
Never again shall we see the image revered
Of a king who to France aggrieved
Brought succor at once, from demise;
Ne’er saluting Henry, to battles we will go,
And the stranger who comes to our walls arow
Shall have no hero greet his eyes.”

Where do you run? What noise wakens, rises, resounds?
Who carries these flags, of our kings, an emblem glad?
God! In the distance, what great multitude abounds,
Crushing the earth under its load?
Speak, Heaven! It’s he! I see his face, the noblest.
The people, proud of his conquest,
Chant, in chorus, his name most sweet.
O my lyre, be still amidst public ardor;
What can your melodies be next to such rapture
Of France below at Henry’s feet?

Dragged by a thousand arms, rolls the colossus stout.
Ah! Let us fly, let us join this pious effort.
What matter if my arm be lost in the turnout!
Henry sees me from Heaven’s court.
People, as one, give this bronze in your memory;
O horseman, rival in glory
To Bayard and to Duguesclin!
Of love by the French take this noble proof aright.
For we do owe your statue to the widow’s mite,
And to the orphan’s obol-coin.

Doubt not! The appearance of this image august
Will make sweet our happiness and lessen our gall;
Frenchmen, praise God! Behold the king, righteous and just,
A Frenchman among you withal.
Henceforth, beneath his gaze, leaping forth to glory,
We may come close to victory;
Henry shall have our troth true;
And when we shall speak of his virtues most worthy,
Our children shan’t go to our fathers to query
How well the good king smiled anew!

Young friends, dance now around this girdling enclosure;
Mingle your joyous steps, mingle your cantillation.
Henry, for his face shows his weal and demeanor,
Blesses your touching elation;
Close by the vain monuments by tyrants upraised,
After long centuries is blazed
The works of a people oppressed.
How comely this brass of a tutelary king,
That France likes to view and is a popular thing,
To whose gaze all are accustomed.

That debased Persia’s conqueror proud and mighty,
Wearied of leaving his features on frail metals,
Threatens, in the grip of his enormous folly,
To impose his form on Athos;
That a cruel Pharaoh, in his lustrous frenzy
Palls with an obelisk hefty
The great nothingness of his grave;
His name dies; and soon the shade of the Pyramid,
For the stranger, lost in those plains vast and arid,
Is sole favor Pharoah’s pride gave.

One day (but let us spurn such dire omens all),
If years or the blows of fate may conquer again
And this modest monument of our love fall,
Henry, in our hearts you’ll reign;
While the towering, lofty mountains of the Nile,
So much dust of great kings ensile,
A burden useless to the world,
But sure testimony to time’s and death’s passage,
And of those no more; thus, the calm gaze of the sage
Sees a tomb into ruin hurled.

The image shows the statue for which this Ode was written.