Babiy Yar (“The Old Woman’s Ravine”) is a large and beautiful ravine in Kiev (Kyiv), the capital of Ukraine, that will be forever associated with the mass murder of Jews by Nazi troops in War World II.

This isolated and deep ravine, historically a site of a military camp, a church, and two cemeteries (an Orthodox Christian one and a Jewish one), provided the perfect place for killing large numbers of people, a fact noted by the Nazi military governor of Kiev, the SS and Police Commander, and the Commander of SS death squads when they were planning the extermination of the Jews of Kiev.

There were other nationalities and groups killed at Babiy Yar, including Roma, Ukrainian Nationalists, the mentally ill, Soviet prisoners of war, Communists, and dissenters of all kinds.

According to witnesses and the few survivors, Jewish men, women, and children were brought to this place of execution under pretense of relocation. Then, they were stripped of belongings and clothing, made to lie down naked on the bodies of Jews already killed in the ravine, and then shot.

This horror has been commemorated in poetry, music, and art, most famously by Evgeny Yevtushenko.  His long poem “Babiy Yar” (1961), written after he visited the site and discovered it had been turned into a garbage dump, is specifically about the massacre of the Jews and the unwillingness of the authorities to acknowledge this crime.

The poem exploded Soviet silence about the Jewish victims buried of Babiy Yar. In fact, Soviet authorities had long refused to acknowledge the numbers of Jews killed at the site.

Yevtushenko, himself, however, had always pointed out that his was not the first poem about Babiy Yar.

There were, indeed, other poets who had already memorialized the Jewish massacre at this site, such as, Ilya Ehrenburg in his Babiy Yar” (1944), and Lev Ozerov in “Babiy Yar” (1944-1945).

However, the very first poet to write about this slaughter was a remarkable woman who lived in occupied Kiev in 1941 and who witnessed firsthand—if not the executions at Babiy Yar—then certainly the tragedy of Kievan Jews. 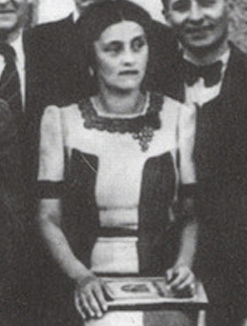 She was a beloved only child, well-educated as only a girl raised by Russian-Ukrainian intelligentsia could be, with a special love for poetry and literature.

It is not surprising then that she started writing poetry while very young. She wrote mostly in Russian, but also in Ukrainian, and French. In fact, she was a polyglot, for she spoke Russian, Ukrainian, German, French, and English (something that would help her in all sorts of ways later in life), and she also translated from these languages.

After graduating from the Institute of Foreign Languages, she married the poet and translator Ivan Elagin (nom de plume of Ivan Matveev), who, like Anstei, became one of the most prominent poets of the so-called second wave of Russian immigration.

They were married in a church, in 1938, in great secrecy – at 2 in the morning – since such religious sacraments were decried in the Soviet Russia of that time.

When the war came, the Anstei-Elagins found themselves in Nazi-occupied Kiev. In a daring gamble, Olga managed to convince the occupiers that she and her husband (who was half-Jewish) were actually Volksdeutsche (ethnic Germans).

Accordingly, they were given privileged treatment, and Elagin even managed to enrol in a school for medics, instituted by the Nazi regime.

When the Nazi troops retreated before the advancing Soviet forces, Olga Anstei, her mother, and Ivan Elagin decided to leave with them, partly to get away from the Soviet regime, which already had Elagin’s father executed as the enemy of the people in 1937, but also because they surely realized that they would have been considered collaborators and shot by the Soviets.

After many misadventures and tragedies (their first child, born in Germany, had died in infancy), Olga, Ivan, and their second child, a daughter who would grow up to become a Russian-American poet Elena Matveeva, and Olga’s mother ended up in a displaced person camp, where the latter died of a heart attack.

The couple now emigrated to America, where Olga and Ivan divorced, though they retained a cordial relationship, as well as a deep admiration for each other’s work.

Elagin went on to become a professor of Russian in Pittsburg University, while Olga eventually became a translator at the UN.

She regularly published poems, stories, and essays of literary criticism in émigré journals, all of which were well-received and widely praised by major critics.

Her work is permeated by a deep spirituality (she had a life-long connection with the Russian Orthodox Church), and a lyricism that makes her keenly aware of the beauty of life around her.

She possesses a deep clarity of vision that allows her to look at life unflinchingly and to write with precision.

This gives her work a sense of connectedness with the larger body of Russian poetry, which allows her to conduct a poetic dialogue with her predecessors and contemporaries.

One critic wrote that it is not possible to talk about the influence of a particular poet on Anstei; rather, she absorbed the experience of an entire generation of Russian poets.

She wrote her poem, “Kirillovsky Yar” (a name for the larger area of gullies and ravines in Kiev that includes Babiy Yar) in December of 1941. It was first published in Munich in 1948.

Ironically, Anstei, who translated so many poems so well, has not been translated very much herself, even though her poems reach out across the years and impress and delight the reader in equal measure.

Here, I offer the first English translation of “Kirillovy Yar,” which is the very first poetic response to the Babiy Yar massacre, and one of the first poetic reactions to the horror of mass extermination.

Perhaps better than anything it shows that whatever evil and insanity that may come, it is still only temporary.

Maria Bloshteyn, PhD, researches Russia and the United States. She is the author of The Making of a Counter-Culture Icon: Henry Miller’s Dostoevsky. She is also a literary translator and has published Alexander Galich’s Dress Rehearsal: A Story in Four Acts and Five Chapters, and Anton Chekhov’s The Prank.  Her translations have appeared in a number of journals and anthologies, including The Penguin Book of Russian Poetry.