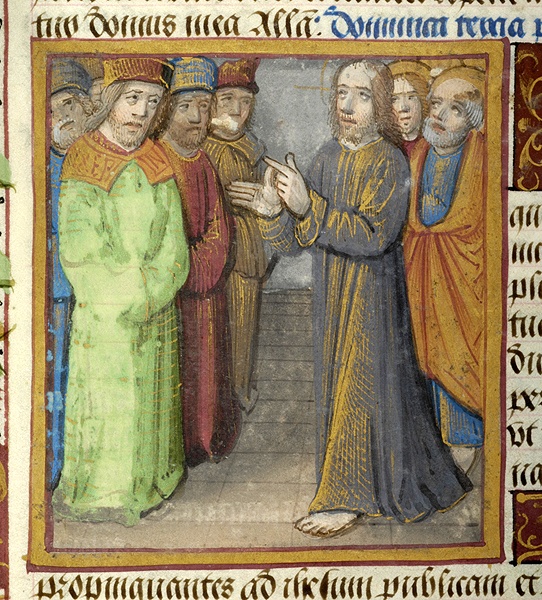 In the famous account of the meeting of Christ with the Sadducees (Luke 20: 27–40), the question is brought up of the resurrection of bodies (in other words, their “recovery” after death). More importantly, the representatives of the “party” that was once the majority in the Sanhedrin, the Sadducees, seek to ask the “Master,” the “Rabbi,” the “Doctor” this fundamental question to which they think they have the correct answer. They hope to bewilder the man they are addressing, and care little for the title they use for him. But their hopes are dashed by the answer they receive: after the Resurrection, men will be like angels.

Our God is the God of the living; there is thus a life after life. But the conception of the afterlife among Jews, as embodied by the Pharisees and mocked by the Sadducees, is indeed so simplistic that it can only lend itself to derision.

On the whole, this controversy illustrates the refusal of history by the Sadducees, who themselves are an enigma. They were members of the priestly class, who were in conflict with the Pharisees, and who refused the very idea of ​​resurrection. That’s about all we know about them – aside from the reference that their name makes to Zadok, high priest under David. They were also supporters of the Romans, during the time of Christ, who lost control of the Sanhedrin to their opponents, the Pharisees.

In comparison to the Pharisees, the Sadducees held a very “modern” and simple doctrine – after death, there is nothing. The soul disappears, there is no other world, there is no destiny. Man has the free choice between good and evil in this life. After death, it is all over. Their doctrine denied all “post mortem” reality. In this they opposed the Pharisees who believed in the immortality of the soul and the resurrection of the “good” – the “bad,” on the other hand, fell prey to eternal punishment.

The “theology” of the Sadducees was the work of a group of priests, who founded the sect, and who were vocal on the theological as well as the political level. They recognized value only in the Torah, thus dooming the rest of the Bible to nothingness. And, although a minority, their “lobby,” during the time of Christ, dominated the priestly caste. Thus, for them, history did not exist, Providence did not exist, only the chaos of human choices reigned. Man had before him neither a future, nor hope of resurrection. It can be said, without caricature, that the Sadducee is the prototype of today’s “average atheist,” – and he was a priest! For him, the Messiah was the hero of a myth.

Let us return to the controversy with Christ on the subject of the resurrection of the body, taking into account that for the Sadducees the world as it is, is nonsense. And, indeed, their position is quite singular, since all the peoples of the earth, of all times, believed, until the eighteenth century in Europe, at least, in a transcendence, including at least one god, or a pantheon, and an afterlife. The memory of a primitive religion is common to all of humanity. But the Sadducees, for their part, had managed to eliminate the history of Israel – and they were practically in power! Nevertheless, the Hebrews believed in the resurrection, since Moses at least (just like the Egyptians, by the way). Did not God promise to restore the world?

And the answer Jesus gave took them for a loop – first, that the dead are indeed resurrection, and two, that the resurrected will be like angels. His opponents, who knew the concept of “angel” but did not believe it, could not imagine such a metamorphosis. And the answer also highlights the idle nature of their question.

We should note that the angel-analogy relates only to the condition of men and women resurrected, who then will have no carnal relationship because they will not feel the need. And the Talmud does tell us that in the Otherworld, you do not drink, you do not eat, all are equal and in harmony. The body of the resurrected undergoes a metamorphosis.

But why should angels not have carnal relations? Simply because they are not susceptible to death and thus do not survive by procreation. (We might suppose that angels also multiple, but that is a different discussion).

Here it seems that Christ establishes a causal relationship between carnal reproduction and the necessity of death. In Heaven, one does not die, one does not die any further. The carnal relation is really a continuation of the original decay. Adam and Eve, after the fall, lost their garment of Light, and, being naked, they were then covered with skins of animals and subject to death. But in the hereafter, people, as began with their first parents, find a body of Light. They participate in the mystery of the resurrection. And the Resurrection of Christ is the principle of all resurrection: by resurrecting, he resurrects in the entirety of his being, body and soul.

Thus, the pool of the Sadducees is paved over! Risen humanity will participate in the rightful filial dignity of the risen Christ, in which filiation and rebirth from the dead together proclaim Him Son of God.

We also notice the Sadducees’ petty notion of sexuality, expressed in a manner that regulates the lot of widows. For the Sadducees, marriage is nothing but a carnal union, we may say a bestial one, since it denies all transcendence accessible to mankind. Marriage, in this case, only a system of filiation; and it is a fact, recognized and regulated by the Law, that the only husband of the woman is the first deceased brother. And yet, clinging to the Law, it seems that the Sadducees have not understood, in their pettiness and narrow mindedness, the full significance of marriage, nor have they grasped the grandeur of human destiny.

Christ makes Filiation holy by his Divinity, by opening us to the omnipotence of God, and thus reminding us of the promise of history, which includes our very own resurrection.

Father Frédéric Guigain was born in Paris, and obtained a DEA in philosophy at the Sorbonne (Paris IV). He was ordained a priest in the Maronite diocese of Jbeil-Byblos (Lebanon) in 2001, and assumed various tasks of pastoral care in Nigeria (Port-Harcourt), Italy (Rome-Albano) and Lebanon (Diocese of Jbeil). He was a parish priest in Amsheet, in charge of the chancery of the bishopric, and chaplain of the diocesan committee for youth ministry. He is currently vicar of the parish of Saint-Cloud in the diocese of Nanterre.

The original version of this article is in French. This English translation is by N. Dass.

The photo shows Christ teaching, from a French breviary, dated to ca. 1511.