Consider the following: If God is perfect and good and all-powerful, why is there evil in the world?

The quick response might be, because there is a Devil. Well, then, where did the Devil come from? The answer again leads to God. Therefore, evil must be God’s creation also. This is a conundrum that has been addressed by many a theologian and philosopher.

But what does “evil” mean? If we point to the myriad instances of man’s cruelties to man, then the cause of it all is man himself. Murder, barbarity, savagery are all products of human will, human decision, and human action.

We do not need to go all the way up to God to find out why such brutality is always on display in the world.

This savagery of man to man is commonly known as “moral evil,” where people or governments do vile things to others.

If we point to earthquakes and tsunamis and disease, which kill people just as well as humans can, then we are speaking of “natural evil.”

But are either of these “descriptions” actually true? Is there really “moral evil” and “natural evil?”

Perhaps the philosophers and theologians are grabbing at straws. Perhaps they do not really know what evil is, and have no idea how to describe it.

Augustine is likely correct when he says that natural evil simply does not exist. Hurricanes and landslides do not occur in order to kill people. Rather, they occur because all creation does what it does, even when animals kill in order to eat. People are only harmed when they get in the way of nature’s doings.

For this reason, all nature is inherently good. Nothing exists in nature intent on doing harm. Here we should bear in mind the Great Chain of Being, as first described by Plato – from nothingness, up through material objects, human beings, and then up towards God.

John B. Storer, for example, upgraded this idea in his book, The Web of Life, in that all things are connected and depend upon each other.

Nowhere in this web, in this chain, do we see the operation of evil – actions done solely to bring harm to others. Aquinas suggests that even a pebble knows God’s love, because it is sustained in creation and does not simply vanish. All things in nature exist because they are needed and are therefore good. This is the opposite of evil – which is never needed.

To point to “moral evil” means pointing to some sort of “moral deficiency” that permits one person to bring harm to another. But what does this mean in a society that no longer believes Christianity to be a viable explanation for anything in life?

We can exhume Hume and declare that “evil” is that which brings “unhappiness,” while “good” is the opposite of that. But this is hardly a satisfying. Or, as Wittgenstein puts it, “The world of the happy man is a different one from that of the unhappy man.”

Thus, we live in two different worlds. Is there really any wisdom in saying, as Hume does, to “avoid unhappiness,” or “pursue happiness,” if we do not know what “happiness” and “unhappiness” are, let alone where they come from.

What produces this “happiness” which Hume wants us to acquire?

If we pursue only happiness, who do we have to make unhappy? What if evil itself may be a source of happiness for some?

Hume’s argument disappears when we look at the depth of evil that indeed does make some people happy, such as, pedophilia, necrophilia, and the list descends all the down to the lowest depths of Hell.

This means that when we speak of evil, we can only speak of harm that comes to people (including the doer of evil himself). Injury, violence, betrayal, hurt, trauma, outrage, atrocity, depravity, torture, and murder – such, and more, are the parameters of evil.

In other words, evil is inert without human volition and human desire. When we are speaking of evil, are we not really speaking of sin, because sin is that condition most peculiar to human beings?

Sin is more than intent – it is action completely devoid of goodness, and it is action that veers into nothingness in that Chain of Being, which is why evil is always destructive.

That which we recognize as goodness, or the good, is the natural state of the world, which is why we see more harmony and peace, even though the disruption of both by wickedness may appear to be frequent. A light cannot create darkness – only the absence of light creates darkness.

Evil needs goodness to exist, but goodness does not need evil at all, because existence or being cannot be other than what it is – harmonious and peaceful. It can be nothing but good, because it has no need of nothingness.

Thus, evil is the manifestation of sin, which is that little bit of nothingness, darkness, that state of deficiency within each human being. What is the source of this deficiency, of sin, is a matter of theology, for even psychology cannot really grapple with the mind.

Is evil, then, not like a grudge which can only hurt? So go many of our actions, so go much of our politics.

Consider the story of Henry Tandey (whether true or not is unimportant in this instance), who was the most decorated soldier of World War One.

In 1918, in the French village of Marcoing, during a fire-fight, Tandey had a young German soldier in his gunsight. The soldier was wounded and appeared dazed and disoriented.

Tandey felt sorry for him and lowered his rifle. The two looked at each other, the German soldier made a gesture of thanks and walked away.

In 1923, Fortunino Matania was commissioned to do a commemorative painting of the Kruiseke Crossroad, near Menin. It depicted a scene after a battle, with a soldier carrying on his back a badly wounded comrade. The soldier depicted doing this charitable deed is Tandey. 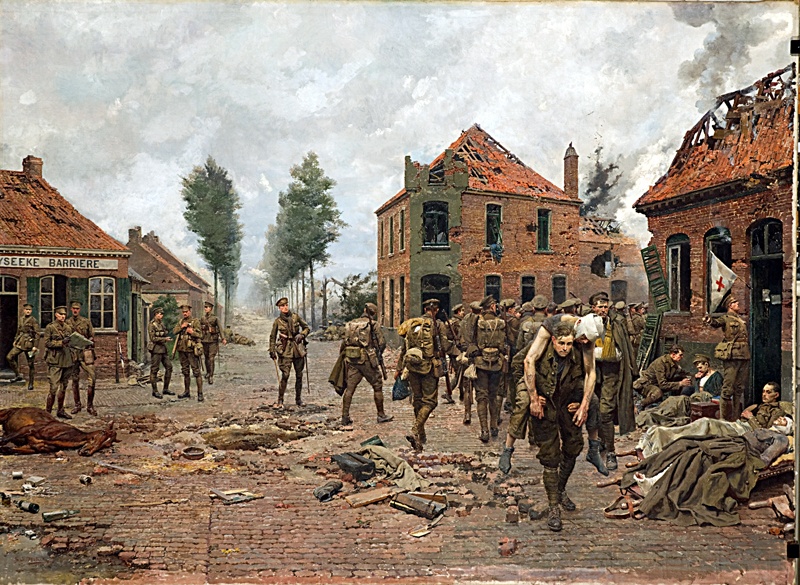 This image became rather popular, and a copy of it eventually ended up in Germany sometime after 1936, where it made its way to the Berghof, the retreat of Adolf Hitler.

It is said that when Hitler first saw the painting, he at once recognized Tandey, who had once spared the life of a wounded, dazed German soldier, because that soldier was Hitler himself.

Now, by not committing an evil act (killing a wounded, dazed enemy soldier) did Tandey do the right thing?

One can only imagine what the world would have been like had he pulled the trigger – those 50 million lives would have been spared that ultimately perished in the Second World War, and there would be no Holocaust, no concentration camps, no evil legacy of the Nazis whatsoever.

But how was Tandey to know, standing in that little French village in 1918, what that German soldier in his gunsight would become?

How can anyone know what the future holds? Tandey did not pull the trigger because just briefly in that utter darkness of the First World War, there yet flickered the light of goodness inside him, which expressed itself in him lowering his rifle. That is all that can be expected of any human being.

The fault lies not with Tandey, but with Hitler, who could not use this brief encounter with goodness to illumine the great darkness in his own soul, a darkness that some twenty years later released untold horror upon the world.

Each one of us is called to overcome the defects in our souls, to subdue out potential for sin – by strengthening the goodness within us.

Only with our goodness can we overcome evil, which is nothing but the outward manifestation of that “crooked timber of humanity,” as Kant describes it.

Evil cannot exist alongside goodness, because it cannot know it, just as darkness cannot know the light, nor can silence comprehend music.

Goodness lies beyond words, beyond the material, for it belongs to the transcendental, which is the same as saying the eternal being of God.

This is not a call to be mindlessly blissful, which is foolishness. Rather, it is a call to get into the habit of placing our lives within the context of eternity. That is true goodness, which is always the rising above the mundane, to search for light in the depth of darkness.

The photo shows, “The Road Of the War Prisoners,” 1877, by Vasily Vereshchagin.